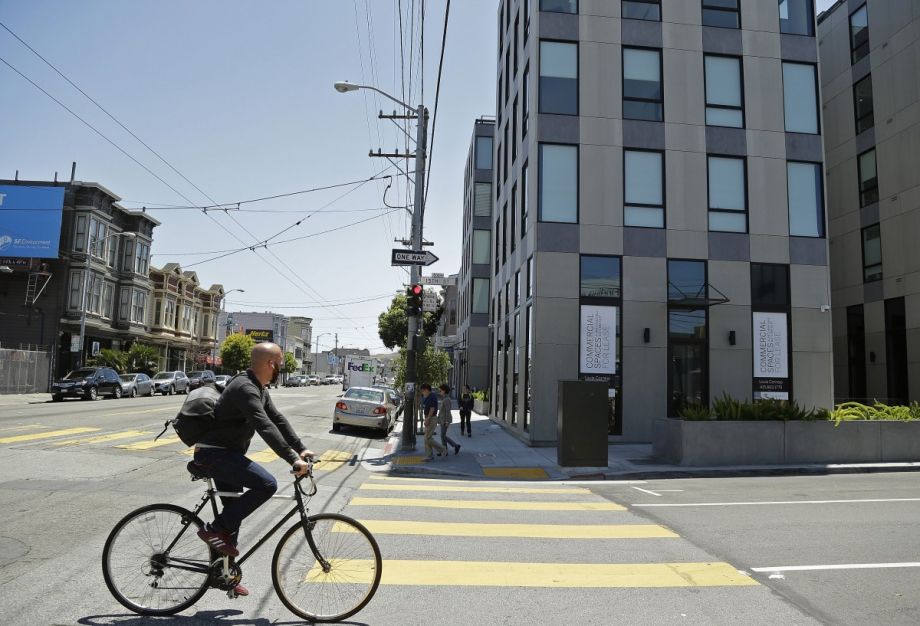 Street-safety advocates began pressuring the mayor to pick up the pace on Vision Zero improvements early in November, after a man named James Samiere was struck by a car and killed on busy Sloat Boulevard. The collision occurred near an intersection where pedestrian-safety improvements were already planned, and close to several areas identified on the city’s high-injury network for traffic incidents. In the wake of Samiere’s death, the pedestrian advocacy group Walk San Francisco and the San Francisco Bicycle Coalition wrote an open letter calling on the mayor to demand improvements at the site of every traffic death and urging him to resolve delays in existing street-improvement projects.

“For years, the community, the city, and the state have been planning improvements to Sloat,” the groups wrote. “But as on many other dangerous streets in San Francisco, improvements have not come quickly enough, and a man has just paid the ultimate price as a result.”

Lee announced his directive to SFMTA in a letter dated Nov. 15, two weeks after the incident.

“One death on our streets is too many and the SFMTA needs to take swift action to improve safety at collision sites,” Lee wrote to the transportation authority. “… I recognize the good work that you and your staff have accomplished and continue to accomplish. But with 17 deaths on our streets so far this year, we need to do more.”

Representatives of Walk SF and the Bicycle Coalition say they’re glad that the mayor chose to act in response to their advocacy, but that more needs to change — and more quickly — if the city hopes to meet its goal of zero traffic deaths by 2024.

“I think that everyone we work with is really committed to Vision Zero,” says Cathy DeLuca, policy director for Walk SF. “They all believe in Vision Zero and they all believe in safe streets, but Vision Zero is an extremely bold goal. We really applauded the city when they took on that goal, but I think what might be missing is a realization that a goal that is that bold requires bold action.”

The number of traffic deaths has not decreased significantly since San Francisco adopted its Vision Zero framework. The city saw 31 people killed in traffic in both 2014 and 2015, and 30 traffic deaths in 2016, according to its own data.

Last summer, Lee was applauded for issuing an executive directive that called on every city department to undertake projects that would contribute to safer streets. But advocates have started to wonder about the efficacy of the city’s so-called “five-year rule,” a quality-of-life policy that requires city agencies to coordinate on street construction projects to keep streets from being torn up more than once in a five-year period. Some have questioned whether the rule could be contributing to delays in safety improvements, as the San Francisco Examiner reported. The rapid response team at SFMTA will be tasked with improving street conditions at fatality sites and working to resolve delays more quickly.

“The agency’s rapid response includes an analysis of what we know about the circumstances surrounding the crash, the crash history at the location, the existing conditions, and a recommendation of what engineering improvements can be made quickly,” says Paul Rose, a spokesman for SFMTA.

Advocates say the most important projects the city can embrace are those that get drivers to slow down and obey the speed limit. While only 10 percent of pedestrians die in collisions where a car is traveling 20 miles per hour, the percentage rises to 80 percent when that speed is doubled, according to the city’s Vision Zero report. DeLuca says her group and others are lobbying for state legislation that would allow them to install automated speed enforcement technology to deter drivers from speeding, similar to the red-light cameras that are already in place.

DeLuca and Brian Wiedenmeier, the executive director of the San Francisco Bicycle Coalition, both say that they’d also like to see the city make better use of available data to inform street-safety improvements. Police data provides an incomplete picture of crashes, they say. Data provided by Zuckerberg Hospital has shown that collisions — and injuries — happen in many more cases than are reported to the police. The data would seem to allow for interventions that are more than reactive, Wiedenmeier says.

“We’ve amassed enough data to start being able to harness the predictive power of that data,” he says. “So yes, I think it’s appropriate to respond when a tragedy occurs on our streets, but it has to be done in concert with a serious commitment to addressing the predictive nature of this data. We know where people have been killed, and we know where they will be killed, unless something changes.”

Advocates say the city needs to make continuous improvements to both its commitment to Vision Zero and its efficiency in carrying out projects.

“I think that we can achieve Vision Zero by 2024, but only if the city and our community takes a much more aggressive stance toward the kinds of engineering fixes that we know are necessary to do that,” Wiedenmeier says. “It’s possible, yeah. But we’re not going to get there if the pace of change continues at what it has been for the last few years.”

The city’s two-year list of priority projects is a start, says Cathy DeLuca. But it’s not sufficient.