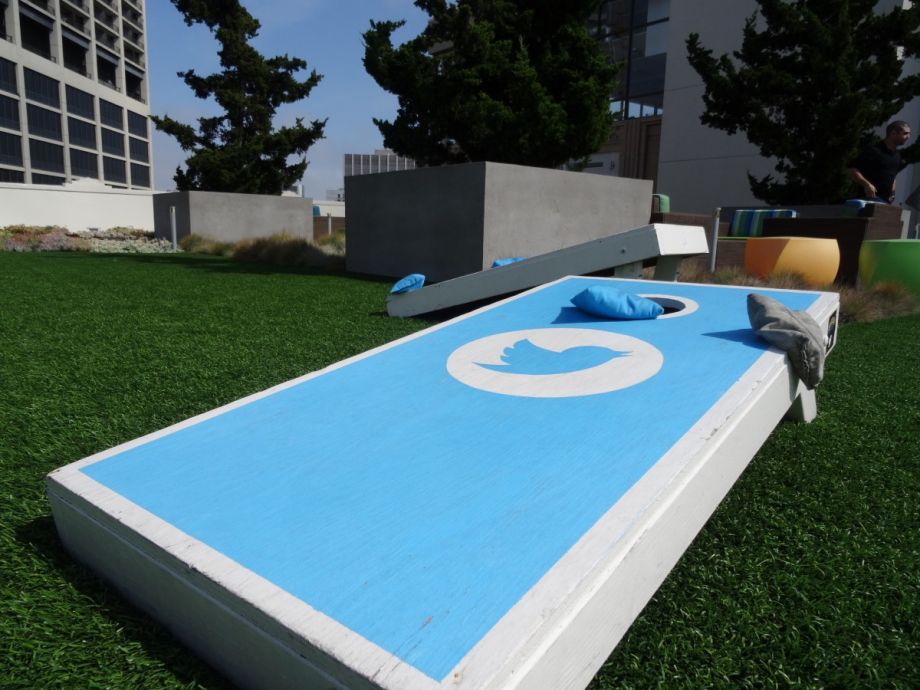 The rooftop lounge at Twitter's San Francisco headquarters. Fox Plaza, across the street, is visible at the top left. (Photo by Oscar Perry Abello)

Just a leisurely walk down Market Street from San Francisco’s gleaming Financial District is the 29-story Fox Plaza building, home to one of the city’s most important technology hubs. But whatever life-changing apps may or may not be under development within its walls, this hub’s importance comes from its primary users: the homeless or nearly homeless families from the surrounding neighborhood and elsewhere in San Francisco and the Bay Area. Its existence is thanks to a community benefits agreement the city negotiated with social media company Twitter.

Compass Family Services operates the bulk of programming for homeless families in Fox Plaza’s first-floor technology hub, known as NeighborNest. The 4,000-square-foot facility, which opened in 2015, saw 3,500 visitors in its first year. They accessed 920 hours of programming (mostly but not all from Compass) and 800 hours of free childcare. Founded in 1914, Compass’ client base is 42 percent African-American, 40 percent Hispanic or Latino, 8 percent white, 5 percent Asian, 3 percent Native Hawaiian or Pacific Islander, and 2 percent Native American.

“Before NeighborNest, each of our six programs had their own computer labs,” says Stacy Webb, communications and corporate relations manager for Compass. “We weren’t able to run a good centralized computer lab for our families. Now parents from all our programs can come in, hand their children off directly to a childcare specialist, and get to work on different classes or workshops.”

A glass wall separates the computer lab area from the main childcare area. The design was intentional, so parents in the lab can easily glance over to check on their children.

“That was a big thing we knew we needed to have,” says Webb. When families are at NeighborNest, he says, it’s often one of the few times in any given week that parents and children can be in the same place at the same time. “The vast majority of the families we are helping are couch surfing, hopping from family and friends’ couches one to another, so it’s not uncommon for a family of four to be split up every night.”

Besides basic computer classes, resume writing workshops and other programming, many families visit NeighborNest to use One Home, a one-stop online shop that contains updated listings for all affordable housing available in the Bay Area and lets families apply for tenancy to listings that match their needs and preferences.

To operate NeighborNest, including rent and electricity, internet access, computer costs, and regular maintenance, Compass Family Services pays zero. Zilch. Nothing at all. Instead, Twitter covers the costs — and, in turn, gets a hefty payroll tax exemption from the city of San Francisco.

“To Twitter’s credit, they could have just given us money, but they wanted to do something that was going to make a very big impact for families experiencing homelessness or near homelessness,” Webb says.

Caroline Barlerin is Twitter’s community liaison, and oversees corporate-community partnerships around the globe as well as locally in San Francisco. While the NeighborNest was conceived and agreed to before she came on board in 2014, Barlerin expanded on the listening processes that Twitter used to develop the NeighborNest in partnership with organizations in the neighborhood like Compass Family Services.

“When I arrived, I started meeting with 65 nonprofits in the first six weeks to begin to listen, learn and understand what the community needs were,” says Barlerin. “If we look at the complexity of the needs, what we started to uncover was the need to address the issues of the digital divide. You can’t find housing or can’t find a job without a computer. It’s hard to access government benefits without a computer.”

Despite being a resident of San Francisco for the past two decades, Barlerin says she was surprised to learn about the number of homeless or nearly homeless children in the neighborhood. “I had no idea that there was an estimated 3,000 children in the Tenderloin. You see a lot of homelessness around, but the children are really invisible,” she says. Twitter’s corporate headquarters is right across the street from NeighborNest, in a 1930s art deco building that sat vacant for 50 years before Twitter moved in. The company was lured, in part, by a payroll tax exemption targeted at helping residents of this economically distressed area.

The building sits along what the city calls the “Central Market” or Mid-Market corridor, which was included in the Central Market-Tenderloin Area Payroll Expense Tax Exclusion program. The Tenderloin District is an ethnically diverse area of San Francisco with an estimated poverty rate of 50 percent (compared with San Francisco’s 13.8 percent overall poverty rate). San Francisco Mayor Ed Lee and local legislators proposed the tax exemption program in 2011, hoping to offer large tech companies like Twitter incentives to move there. They hoped such HQs would stimulate the local economy by bringing in highly paid employees who would, in theory, spend some of their six-figure salaries at local establishments.

San Francisco’s payroll expense tax is 1.5 percent, with a blanket exemption for businesses with a payroll of $250,000 or less. Companies with a payroll of $1 million or below can apply for and receive the Central Market-Tenderloin exemption automatically for moving into the designated area. The city requires companies with a payroll of more than $1 million that move into the designated area, such as Twitter, to negotiate a legally binding community benefits agreement covering each year they wish to receive the exemption, covering 100 percent of city payroll taxes otherwise levied.

The NeighborNest is a centerpiece of Twitter’s multiyear agreement covering 2015 to 2018. Another feature: providing financial grants to nonprofits serving the residents of the Central Market and Tenderloin neighborhoods — for a total of $3 million over the four years.

“It’s one-year grants but I think in multiyear terms,” Barlerin says. “We also try to give those early in the year so a nonprofit has the runway to learn and invest and grow from that.”

From 2014 to 2016, the city reports $2.9 million in cash grants from tech companies (including $1.9 million from Twitter alone) thanks to community benefits agreements. The grants have gone to dozens of nonprofits located in the designated Central Market-Tenderloin area, including Compass, the Eviction Defense Collaborative, Curry Senior Center, the Justice and Diversity Law Center, Catholic Charities, Code Tenderloin, Oasis for Girls, Play-Well Tek, the Boys and Girls Clubs of San Francisco, and more. While the city offers to connect companies to nonprofits that provide services in the designated area, the businesses have largely come to the table with existing relationships with nonprofits.

Over the same three years, the city reports $2.9 million in in-kind donations to nonprofits in the Central Market-Tenderloin area.

As part of the Central Market-Tenderloin payroll tax exclusion program, the city also established a citizens committee, a volunteer public body that meets regularly to guide and gather feedback on the community benefits agreements. In its advisory role, the committee adopted a community benefits agreement framework in 2012, which prioritized stabilizing the community as new companies move in. The framework includes support for small businesses. “Not only are small businesses the backbone of the local economy, providing jobs and important goods and services to the existing community, they also serve as important social hubs,” the framework reads.

With that framework in mind, the city encourages large companies that get the exemption to contract with local vendors as much as possible, for services such as cleaning and catering. The city also asks companies to collect receipts from employees when they patronize local small businesses in the neighborhood. If the business address is in the designated area, the city adds that to the local contracting numbers in its reporting of local purchasing under each agreement.

From 2014 to 2016, the city reported $5.2 million in local purchasing by companies with agreements under the Central Market-Tenderloin program. Of that total, $3.4 million came from Twitter. That substantial share may have something to do with the fact that Twitter has 1,900 employees in its headquarters. That’s a lot of receipts to turn in and a lot of mouths to feed at company events, among other local procurement contracts. The company declined to disclose a list of its local vendors.

All that said, Twitter’s community benefits agreement and others like it have not been without controversy in San Francisco. One sticking point: Nonprofit organizations are not exempt from the city payroll tax. One nonprofit employee, whose organization rents office space inside Twitter’s building, offered her perspective to the local public radio station: “We pay payroll taxes, along with 20 other regional centers serving California’s most vulnerable: people with intellectual disabilities. Forty-four million dollars have been cut from our budget and the average caseload is now 90 people, 30 above the legal limit. Last year, my request for a bottle of Wite-Out was denied because our operations budget was exhausted. We get free coffee, but bring our own cream and sugar.”

Meanwhile, the vice chair of the citizens advisory committee quit in 2015, telling local reporters at the time, “I left the CAC in response to the effort that was put into negating and minimizing the CAC’s input into the formation of the community benefit agreements by the folks who are supposed to be supporting and administering the process.”

So in 2015, that’s $15,770,859 in foregone tax revenue in exchange for a combined $2,449,122 in local purchasing, cash grants and in-kind donations within the designated tax exemption area — though the NeighborNest, with its build-out cost of about $3 million, is not counted in those totals.

It’s hard to say, of course, how much of the foregone tax revenue might have come back to the area in the form of public services or public assistance were it collected in the first place. But it’s also hard to say how much of the activity reported under community benefits agreements might have happened even without the tax exemption.

The city may yet find out how much tech companies’ commitment to the neighborhood really depends on a tax exemption. The Central Market-Tenderloin Payroll Expense Tax Exclusion program is set to expire at the end of 2018. Webb is hopeful that even if it does go away eventually, the local impact in terms of all the above will continue.

“We’re hopeful that no matter what happens, the change has already taken effect,” says Webb. “It’s like recycling, once you know you should and you start doing it, you really can’t go back.”