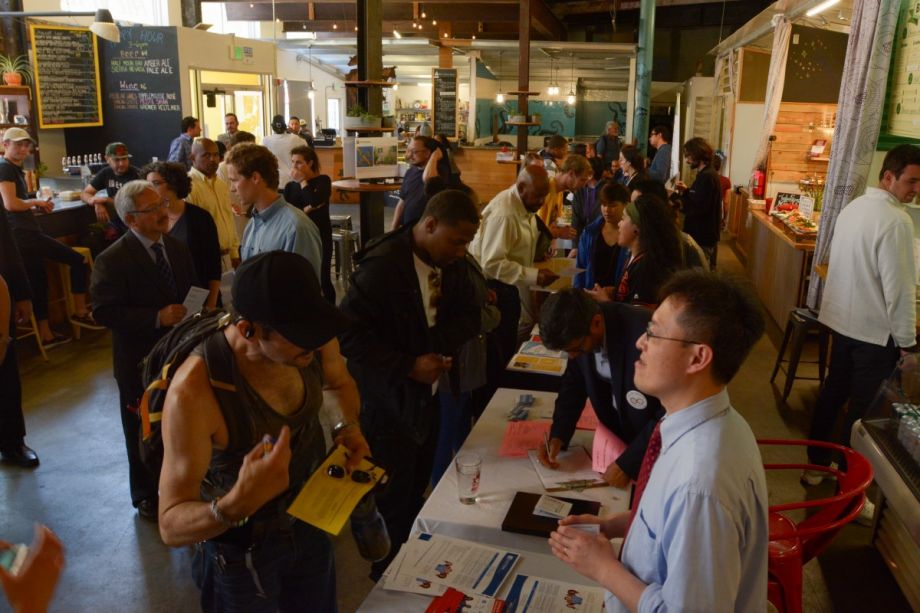 When Ilana Lipsett first noticed a group of guys selling marijuana outside The Hall, a ground-level retail space in San Francisco’s Mid-Market neighborhood that she helps run as a community manager, she didn’t tell them to leave or call the cops.

Instead, she struck up a conversation. And as their relationship grew over time, they told her they were sick of dealing drugs.

“A couple of them started asking me for jobs,” she says. Having spent the past five years working on social equity issues in the Tenderloin, a district beset with homelessness and drug issues just north of Mid-Market, Lipsett reached out to her connections and collected dozens of employment resources.

“I put them together in a pamphlet and started handing them out to people [on the street], saying ‘Here, go try this,’” she says.

The reception Lipsett got was so positive that she brought the idea to police officer Teresa Ewins, captain of the Tenderloin district. Would Ewins’ lieutenants, she wrote in an email, be interested in spending an afternoon handing out job fliers instead of tickets?

Ewins wrote back: “I love it.” A few months later, the idea grew in scope from a flyering project to getting Lipsett’s connections under one roof so they could hand out applications in person.

In July, The Hall hosted the first incarnation of this idea with a job fair that connected 16 companies and organizations with more than 150 visitors from the neighborhood. On Tuesday, a second event pulled in 19 potential employers and career services outfits and around 100 job seekers. It was hailed by city officials as unprecedented for the Tenderloin, an area with the highest density of parolees in San Francisco, because the employers didn’t require criminal history checks or an extensive work history when considering new hires.

Companies like Homebridge and Bon Appétit, a national catering group that works for local tech companies and universities, stood at booths with applications and pens on hand, while workforce development specialists from America Works gave out info on resume writing classes.

Tunisia Blackwell, 44, saw it as a step toward mending the relationship between homeless people like herself, and local businesses and the government, which has been damaged by the tech boom and recent controversies like the homeless relocations before Super Bowl 2016. “Sometimes there’s a closed door between the homeless and the actual people in businesses,” she said. “I think this is a very good opportunity for the street people to see that the community is trying to help them.” San Francisco is home to an estimated 6,686 homeless people.

The sight was a rare one for those who know the Mid-Market area and its reputation for crime. Employees from corporate giants like Twitter mingled with ex-inmates looking for work, and cops stood on the street handing out employment brochures to people passing by.

“I’m in awe that [the police] are actually helping that way,” Blackwell said. “By them doing that it makes me reach out to other people, so I appreciate the officers.” She later left the job fair and came back with a group of friends who were looking for work.

There was even a surprise visit by San Francisco Mayor Ed Lee.

“When folks look at people on the streets, they usually say ‘They’re going to have to move or go somewhere else.’ We don’t want that to happen,” Lee said. “We want them to actually have an opportunity to transform themselves in a positive way. Our prosperity should include everybody.”

The Hall is part of a recent real estate expansion taking over Mid-Market, though its focus on community events like the fair has positioned it as a cultural bridge between two San Francisco neighborhoods with wildly different identities. Market Street, where it’s located, is seen as the geographical divide between the city’s tech renaissance and its intractable poverty issues in areas like the Tenderloin.

The neighborhood used to have one of the highest storefront vacancy rates in all of San Francisco until the city started tempting businesses to set up shop in the area with tax breaks in 2011. Now, the entire Market Street corridor is home to 17 major tech companies.

But for job seekers like Henry Williams, 51, who just finished up 10 years in federal prison, the fair made San Francisco’s gentrification and displacement woes a little lighter — at least for the moment. “Everyone’s been very helpful,” he says.

America Works helped him prepare his resume earlier in the week. He was nervous when he thought about joining the job hunt after a decade away from society, but now he has an interview lined up in a few days.

“I’m bringing all my children out. They’re just waiting for me to get situated,” he says, talking about his seven kids back in Detroit.

The police department’s Ewins says even though the Tenderloin has never seen an event like this before, it came together with ease. “The mayor’s office was on board, the community was on board, people in the tech industry, they all came together,” she says. It was somewhat spontaneous but not surprising; those most invested in lifting the Tenderloin’s street populations out of poverty are constantly stirring up new ways to address the issue.

“We can talk about it all day long but if we don’t put the idea to action, then what’s the use of having a conversation?” she says.

Her officers spend most of their time walking or biking through the area instead of driving, to build relationships with the pockets of homeless people hanging out along Market’s sidewalks. Those conversations are part of what spurred her to take on Lipsett’s idea so enthusiastically.

“There’s a big fear,” she says. “People think ‘If I go apply for a job they’re going to know about my criminal history.’ But here, everyone knows you have a criminal history, so it’s off the table.”

She says she’s not sure if there will be another job fair this year. She’d be interested in hosting another one in summer 2017, because mid-year usually brings a spike of crime in the Tenderloin when kids are out of school.

First, she wants to look at the numbers of applications submitted, and make sure those new connections stick between employers and Tenderloin residents as well as they did for people like Courtney Flood, 34. He was one of the guys selling marijuana just a few feet away when Lipsett approached. Now he works at one of the small kitchen spaces that serves food in The Hall during the day.

“I’m surprised to see this many people come out,” he said Tuesday. He hopes he’ll be walking down the street in the near future, and see one of his friends on his way to a new job. “And I’ll be like, ‘Where you working at?’ [and he’ll say] ‘Man, remember that job fair?’”

If they take advantage of the fair in the same way he took advantage of Lipsett’s offer, then he’ll know the job fair was a success.