A New Kind of Health Center Is Coming to Mission District in S.F. 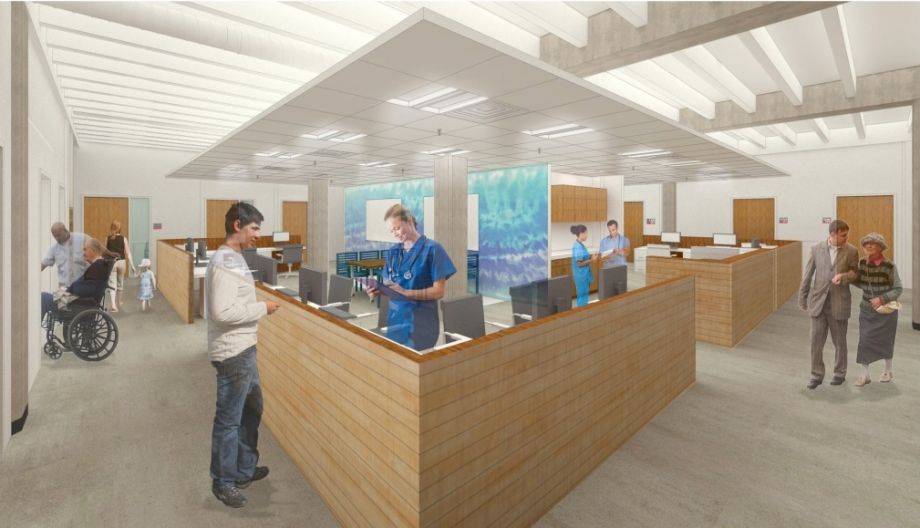 San Francisco’s housing crisis has spared no one. And the rapidly rising rents have made it difficult for nonprofits that don’t own their space to stay in the neighborhoods they serve. You think it’s hard for a recent graduate with minimum student loan debt and no children to rent a three bedroom with her friends in the Bay? Imagine a nonprofit looking for 50,000 square feet of space for a new headquarters and a one-stop-shop community health center. Yet, against all odds, HealthRIGHT 360, an organization that provides affordable primary care, mental health and substance abuse treatment to vulnerable populations has found a way to buy and renovate a building on the edge of the rapidly gentrifying Mission District for that exact purpose. The $53 million health center will open its doors this summer.

“We’re doing this in San Francisco, where the real estate market was kind of insane, in terms of the ability to secure, either to purchase or lease commercial space,” HealthRIGHT 360 CEO Vitka Eisen recently told Next City. “The real estate challenges were becoming an increasing threat to the city’s nonprofit sector, with rising rents pushing nonprofits out of the city. All of those social determinacy services — the outpatient primary care and substance use, the mental health treatments. All of those exist in rental properties. We rent space. We were looking at it long term, we felt like one of the biggest threats facing those services in San Francisco was that we would no longer be able to afford to provide those services in San Francisco. And so when we did an analysis of a rent versus buy, at that point in time, we thought that buying it was a good idea.”

HealthRIGHT 360’s predecessor organizations, Haight Ashbury Free Clinics and Walden House were established during the cultural revolution in the 1960s to provide services for the uninsured, homeless and socio-economically disenfranchised, including those with HIV/AIDS. In 2011, the two organizations merged under the moniker of HealthRIGHT 360 and incorporated a number of other healthcare providers under its family of programs. Today, the $100 million, 1,000-employee organization offers California’s homeless and low-income community a range of healthcare services at over 70 locations in 13 counties across the state, from primary and mental health care to chronic disease management and housing assistance. In addition to outpatient locations, HealthRIGHT operates a number of small residential treatment centers and recovery transitional housing facilities. The organization also operates clinics within prisons and other community justice facilities, providing case management and care to incarcerated and formerly incarcerated people. While some of the San Francisco outpatient locations will be consolidated into the new facility, all of the residential facilities will remain open.

A rendering of the new facility. (Credit: HDR)

In HealthRIGHT’s search for a new home, the organization found a 1906 garment factory just north of the Mission that they purchased for $17 million in 2014. It was originally a four-story 40,600 square foot building, but during the renovation they added a mezzanine to first floor — which had 20-foot ceilings — to add an extra 10,000 square feet of usable space. The building has large, floor-to-ceiling windows and original detailing on the facade. The added space will allow HealthRIGHT to add more services. They’ll have a pharmacy on site as well as four dental chairs. “We realized if people have no teeth, it’s very hard to get a job. You don’t think about that. We think about it,” Eisen says. “People don’t think about impact of no dental care on future employability.” In addition to the health services the new building will also include an array of social services related to reentry, housing, employment, education, computer literacy and wellness.

These services are critical for the population HealthRIGHT serves. In the Bay Area, a region with a median household income of $88,518, the organization’s San Francisco patient base had an average household income of $10,690 this fiscal year. Crucially, that income will never dictate the terms of care — HealthRIGHT has a policy of never turning turning away anyone, regardless of their ability to pay. (Thanks to the Affordable Care Act’s Medicaid expansion, 80 percent of their patients now have a source of payment).

For Eisen, HealthRIGHT 360 is more than a job. A former heroin addict, Walden House’s treatment program helped her turn her life around and she went on to earn her undergraduate degree, a Masters in Social Work from San Francisco State University and a doctorate in education from Harvard. As she was completing her dissertation, Walden House asked her to work for them, and in 2010 she became their CEO.

Eisen believes the new building will allow HealthRIGHT to serve its clients better than ever have before. The pharmacy, for example, will allow customers — already strapped for time and resources — to get prescriptions filled before they even step outside, eliminating an extra stop on the commute home.

“If you have a prescription for your high blood pressure medication, that the nurse practitioner or physician writes on the fifth floor, you can fill it on the first floor before you even leave,” she says. “When you think about that level of support, we are much more likely to improve the health and the life of the people we serve.”

HealthRIGHT anticipates serving 9,500 people annually at the facility. That’s a massive impact for the retrofitted building’s $53 million price tag. The project was largely made possible thanks to federal New Markets Tax Credits that contributed roughly $12 million in equity or about 30 percent of the project development costs. It was a learning process for Eisen and her staff: “We’ve never done capital projects with rehabbed buildings before, but this was, by far, the largest project we’ve ever done,” Eisen says. “And we weren’t very deeply familiar with the New Markets Tax Credits.”

Eisen’s team worked with Paul Breckenridge at Breckenridge Consulting Services in Seattle to secure $51 million in federal NMTC allocation from Banc of America CDE, the Corporation for Supportive Housing, Enterprise Community Investment Inc., Primary Care Development Corporation and the Northern California Community Loan Fund. The rest of the financing came in the form of loans from Bank of America Merrill Lynch and Nonprofit Finance Fund, as well as grants from an array of individual donors and foundations including the Kaiser Foundation.

HealthRIGHT’s leadership worked with a group of trusted financial advisers who helped get the project over financial hurdles and across the finish line. That’s no small feat, given the real estate climate in the Bay Area. And now Eisen feels the building has taken on the character and ethos of the company itself. “We were looking for an adaptive reuse project,” she says. “It wasn’t a tear-down. It was an old building, but we believed we could rehab the building. It’s kind of metaphoric for the work we do.”

This article was co-edited by Gregory Heller. Heller is executive director of the Philadelphia Redevelopment Authority, where he focuses on the intersection of real estate and social impact. In 2015, he presented a talk at TEDx Philadelphia on social impact real estate. He is a Next City Vanguard and was recently named a member of the 2016 Urban Land 40 Under 40, which recognizes the “best young land-use professionals from around the globe.”

This article does not reflect the views of the Philadelphia Redevelopment Authority or the city of Philadelphia.