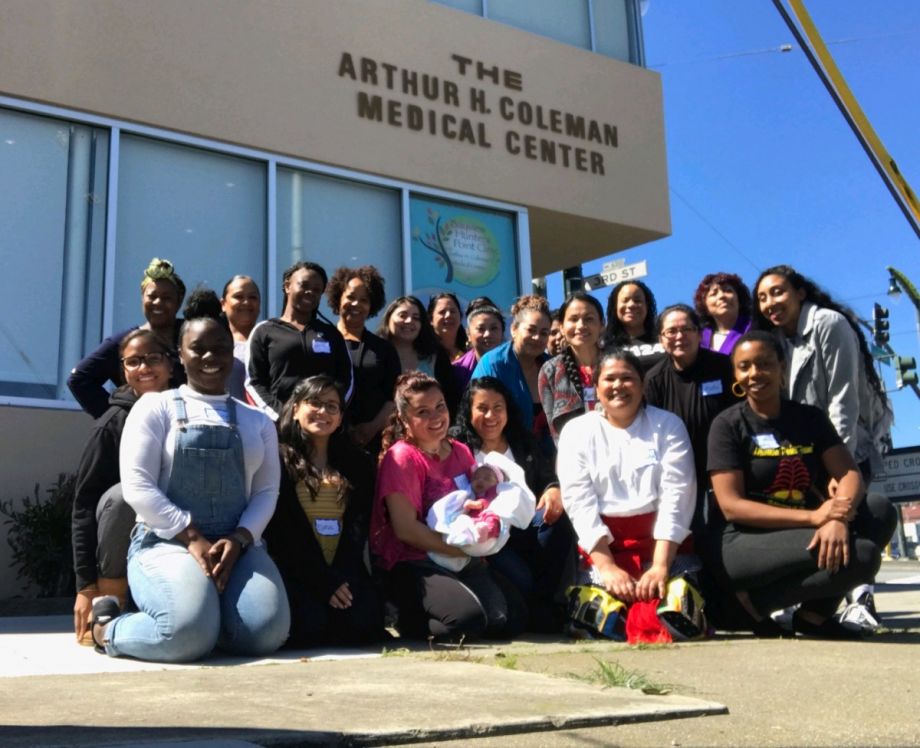 But it didn’t pay her bills. “I’ve always had to do doula work as a side hustle,” said Mystic. “If I was working with a Black woman, I was volunteering.”

Birth doulas provide emotional, physical and informational support to women before, during and after childbirth. They don’t provide medical care, but have gained recognition as a potential part of the solution to discrimination among health care providers against birthing women of color and troubling racial disparities in birthing outcomes; Black women in the U.S. are three times more likely to die from pregnancy-related causes than white women.

San Francisco is no exception to the dismal statistics. Black mothers accounted for five of the 10 maternal deaths in the city between 2007 and 2016, and Black infants represented 15% of infant deaths in the city, but only 4% of births. Black, Pacific Islander, and Latino newborns in San Francisco are more likely to die than white newborns.

Care from doulas has been shown to reduce racial disparities in C-section and preterm birth rates, and improve satisfaction with the birth experience.

But low-income women and those of color rarely use doulas. The average doula costs $1,200 per birth, and Medicaid rarely covers doulas, limiting their availability in low-income communities.

In addition, for women of color, having a community-based doula, typically a doula from the same ethnic community, can mean more culturally sensitive care, due to shared life experiences and language. But most doulas are upper-middle class white women.

The program is as much workforce development as it is health equity. While the services are free for clients, the doulas receive a living wage in notoriously pricey San Francisco, health insurance and other benefits, and mentorship. Marna Armstead, SisterWeb’s executive director and co-founder, said that the organization arose from a shared vision among its co-founders of creating a sustainable career path for doulas who want to serve their communities.

Mystic, who started at SisterWeb as a doula and now coordinates doula care for its Black doula program, says she no longer has to have another job to support her San Francisco-based family.

Training is free for SisterWeb doulas. (Private doula training can cost hundreds, even thousands of dollars – a barrier to diversifying the field.) Once on board, they receive ongoing training to expand their skills in areas like postpartum care and supporting stillbirths.

In a field with high turnover and burnout, SisterWeb tackles more than just financial sustainability. To protect their mental health, SisterWeb pairs doulas with on-call mentors who are seasoned doulas or midwives. Mystic says that clients face obstacles ranging from housing instability to domestic violence to substance use issues, which can also take a toll on their doulas. “Sometimes the things [my clients] are telling me are very intense,” said Elena Mariscal, a doula in SisterWeb’s Latinx doula program. “I have a mentor and a cohort of two other doulas. They help me unpack the emotion.”

Working in cohorts also helps make the on-call lifestyle of a doula more manageable, said Mystic. With a cohort, doulas “don’t have to be superwoman anymore.”

To date, SisterWeb has raised nearly $1 million from a patchwork of foundations, a city-managed health plan, and revenue from a local sugary drinks tax, according to Armstead. She notes that these funds aren’t sufficient to employ the 12 doulas and 10 staff members full-time, although most work over 28 hours a week.

The city of San Francisco’s support hasn’t only been financial. Expecting Justice paved the way for the Champion Dyad, SisterWeb’s collaboration with five hospitals in San Francisco to integrate the doulas into labor and delivery teams. SisterWeb and these hospitals mutually share feedback, and the hospitals refer patients to SisterWeb.

Doulas, said Dr. Zea Malawa, Expecting Justice’s leader, can “disrupt racism” in a hospital, by amplifying their clients’ questions and concerns when encountering providers with unconscious or conscious racial bias.

She thinks doulas can be more effective when birthing teams see them as partners, so Expecting Justice leveraged its relationships with hospitals to establish the collaboration.

Armstead credits the collaboration with educating providers on a community-based doula’s role and enabling constructive conversations about how to reduce bad experiences for patients of color.

Since 2019, SisterWeb has served 200 clients, including some who moved, dropped out, or withdrew due to other unforeseen circumstances, said Armstead. University of California, Berkeley researchers are currently evaluating the program’s impact on many areas including clinical outcomes and client and doula experiences.

The COVID-19 pandemic threw the fledgling program a curveball, forcing a rapid pivot from high-touch to virtual care. Prenatal and postpartum doula visits, and even labor and delivery, as hospitals restricted visitors, shifted from in-person to phone, Zoom, or FaceTime. The transition was challenging, given that doulas typically build trust and relationships with clients face-to-face, said Mystic.

Even when some hospitals relaxed their visitor policies, allowing doulas to return, SisterWeb cautiously proceeded. Feeling ethically obliged to provide the doulas health insurance before sending them into hospitals during a pandemic, SisterWeb had to first convert them from contractors to hourly employees, Armstead said. Doulas also had to be trained in how to use PPE and in other COVID safety practices.

Although the road was “bumpy,” Armstead said, the doulas have adapted. During one birth, Mystic said, hospital staff patched her into the room through an iPad on a tripod, and, for 15 hours, she coached the client and her partner, giving tips on breathing and massage techniques. In addition to training clients’ partners or family members who support them during labor and delivery, doulas have also built relationships with clients before births through more frequent touchpoints like text messages and calls.

The pandemic also thwarted a bill proposed in the California assembly in early 2020 that would have established a pilot to expand Medi-Cal (California’s Medicaid program) funding for doula care. The bill, which arose from a statewide working group Expecting Justice helped lead, collapsed as the state legislature diverted its focus to the pandemic.

“We’re hoping to re-introduce that bill,” said Malawa. “Access to high-quality doula care might be the difference between life and death for some moms.”

This story has been supported by the Solutions Journalism Network, a nonprofit organization dedicated to rigorous and compelling reporting about responses to social problems.