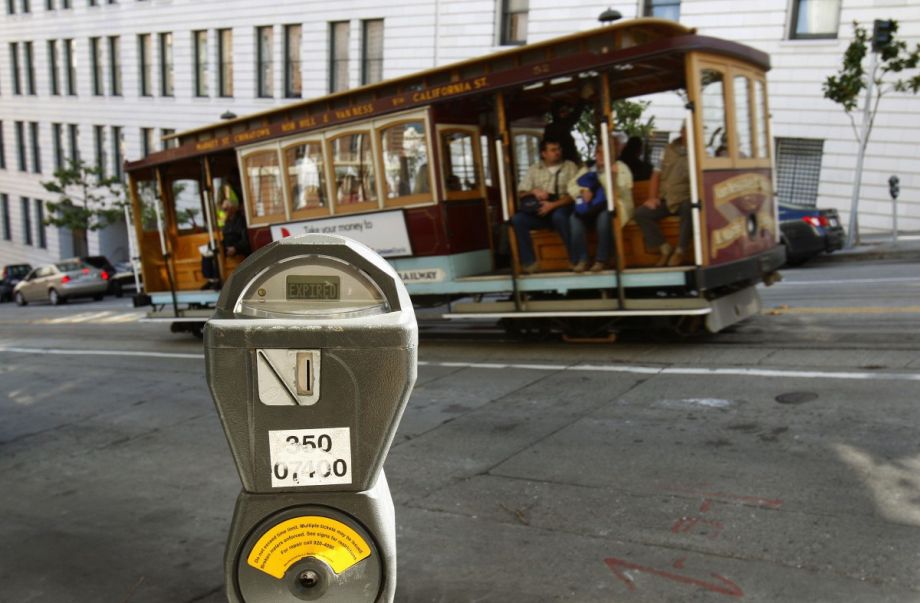 On Tuesday, the San Francisco Municipal Transportation Agency (MTA) board voted to expand its demand-based parking price program citywide to every meter and city-owned lot and garage.

With this system, meter rates go up or down based on demand, which encourages faster turnover on overly crowded (more expensive) blocks and increased use of underutilized parking (where the fee is cheaper). According to the MTA, San Francisco is the first in the U.S. to implement such a program citywide.

Meter pricing is currently a minimum of 50 cents per hour and a maximum of $8 per hour. Rates are set block by block and rates change throughout the day to reflect peak hours and off hours. Beginning in January 2018, the city will start adjusting those rates every three months. If a block is consistently at 80 percent or more occupancy, the hourly rate will go up 25 cents. If it’s at 60 to 80 percent occupancy, the rate will stay the same. Below 60 percent, the price drops by 25 cents.

“The goal of this project is really to get people into parking spaces as fast as possible,” Hank Willson, MTA parking policy manager, said at Tuesday’s board meeting. Doing so, he explained, will help reduce congestion and greenhouse gas emissions by decreasing the amount of circling people are doing while looking for spots. According to Willson, the system will also make parking pricing more transparent and even help drive traffic to businesses.

At the end of the pilot, they found that average rates went down by 10 cents per meter. “This was a particularly surprising result for people who thought ‘demand-parking pricing’ was a fancy way of saying MTA is raising meter rates,” said Willson.

In addition, the time required to find parking was nearly cut in half in pilot areas, they reduced the amount of overly full blocks by 16 percent, and increased the number of blocks with that 60 to 80 percent target occupancy by 31 percent. Willson said they saw an increase in sales tax revenue in pilot areas too, which supports his suggestion that the pricing system drives traffic to businesses.

In 2014, the MTA board voted to make demand-based pricing permanent in the pilot areas. Though those meters in the pilot areas have had six and half years of quarterly rate changes now, none has yet hit the max rate of $8 an hour. Only half of 1 percent of meters have reached $7 an hour.

“Our analysis says this will be a revenue neutral program. … Based on early tests, we think roughly 80 percent of rates won’t change,” Willson said.

Thanks to the promise of lowered emissions and fewer drivers angrily circling the block with their eyes on the parking lane instead of other road users, the demand-based parking program has garnered the support of alt-transportation advocates.

“We are definitely supportive of the expansion,” says Tom Radulovich, executive director of Livable City. “It reduces traffic congestion that comes from cars circling for parking and reduces the bike and pedestrian danger you get when people are cruising for parking or give up and double park.”

But though he’s supportive, Radulovich says the city has lots of work to do still with parking and curb management. He wants to see San Francisco extend enforcement hours later in the evening and to Sundays. Currently most enforcement ends at 6 p.m. and there is no enforcement on Sundays.

“It’s the bad old days of parking starting in the evening,” he says. “Often the busiest times for some [commercial districts] are Sunday or in the evenings. I live in the Mission. On Valencia Street, none of those spots turn over after 6 p.m.,” he says.

Radulovich is not alone. Jim Lazarus, the San Francisco Chamber of Commerce’s vice president of public policy, testified in support of the demand-pricing expansion at the board meeting. During his comment he suggested the MTA should consider expanding metered parking into the evenings and Sunday.

In addition to expanded hours, Radulovich wants to see the city take action on load zones. With a massive increase in the use of on-demand services such as Uber, Lyft and Postmates, and online retail increasing deliveries volumes, curb space is in high demand.

“We’re seeing our bike lanes and bus lanes turning into load zones,” he says. “We probably need to shift what’s now curb parking to short-term loading to accommodate demand. … The city says there’s a curb management strategy underway, but we haven’t seen any signs of life around it.”