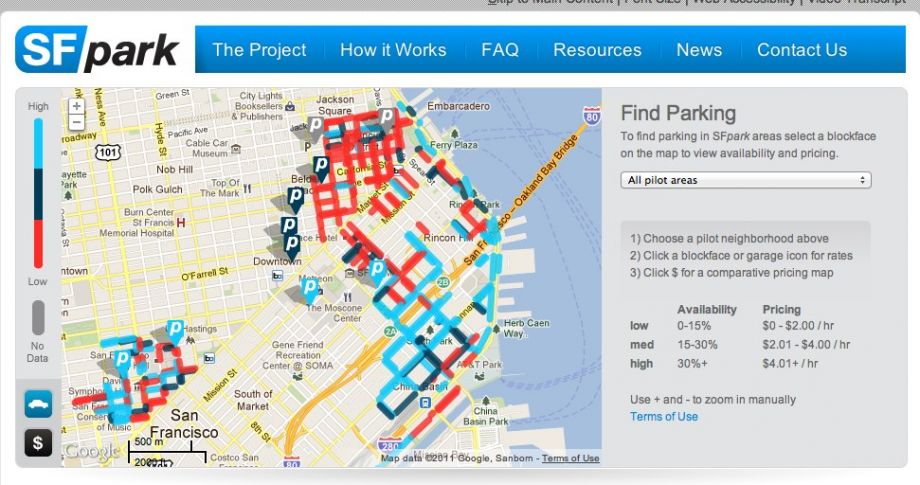 For years UCLA professor Donald Shoup has pushed the idea that to stop drivers from aimlessly circling around our dense urban cores in search of underpriced parking, cities should simply start charging market-clearing rates to park your multi-ton hunk of metal. Cities should aim to price parking, Shoup argued in his monumental tome on the subject, The High Cost of Free Parking, such that 15 percent of spaces are free. In other words, curbside parking should be costly enough that it will always leave one or two spots per block for those who need them, but not so expensive that it creates an oversupply and too many spaces go empty.

The idea is simple enough — the national economy, after all, runs on market-clearing prices, as do the countless private garages that offer structured and underground parking — but as with all things, convincing citizens to pay for what has traditionally been free (or nearly free) is not easy.

Finally, Shoup has someone willing to listen: San Francisco. While the city can be slow to implement certain reforms — whether that’s upgrading its busiest bus route or approving small infill development — San Francisco has nevertheless been a leader in many areas of in-city transportation, parking among them.

SFpark, the city’s variable-rate parking program, is perhaps the most complete implementation of Shoup’s ideas to date. Started three years ago, the program gradually adjusts rates on electronic parking meters in the most congested parts of the city. (All are near downtown.) Rates can differ by time of day and day of the week, and are adjusted every month or so. Even then, they can only rise or fall by 25 cents after each adjustment period and are capped at $6 per hour, which costs less than nearby garages, where hourly rates can reach into the double digits.

According to a study published last month in Transportation Research Part A: Policy and Practice, the program has worked. San Francisco’s occupancy goals have been met, and “cruising” for parking — driving around and clogging up streets after you’ve already reached your destination — is down by 50 percent.

The group of researchers — who represent the University of California, Santa Cruz, Carnegie Mellon and transit consultancy Nelson\Nygaard — analyzed the 256 blocks subject to SFpark and compared them to a 55-block control group. With access to the San Francisco Municipal Transportation Agency’s data, the team had a total of more than 2.4 million data points during metered hours to analyze.

Using a model to simulate a driver looking for parking (the model “cruises” down a street and, if it doesn’t find any open spaces, takes a series of random turns until it does), the researchers estimated that the blocks under SFpark saw a 50 percent reduction in cruising. They also found that the program met its goal of a 60-80 percent occupancy rate for spots. Under the program, if occupancy was below 60 percent, parking rates were cut by 25 cents. If more than 80 percent of spots on a block were occupied during metered hours, rates were hiked by the same amount.

“The impacts of each rate change,” the researchers wrote, “are individually small, but after the ten rate changes evaluated in this paper, the changes are shown to be cumulatively substantial. Gradual impacts over time also suggest that it has taken time for rates to come up to market-changing levels and for parkers to adjust to rate changes, learning where to find blocks with cheaper and more abundant parking.”

They also note that “these impacts come against a background of other policy changes implemented under SFpark,” which include “relaxing time limits” — with market-rate parking, there isn’t much of a need to limit parkers to an hour or two — “providing more information to users and improving other aspects of the parker experience.”

A pre-print version of the study is available for free online.