San Francisco Will Say So Long to Brick Sidewalk – Next City

San Francisco Will Say So Long to Brick Sidewalk 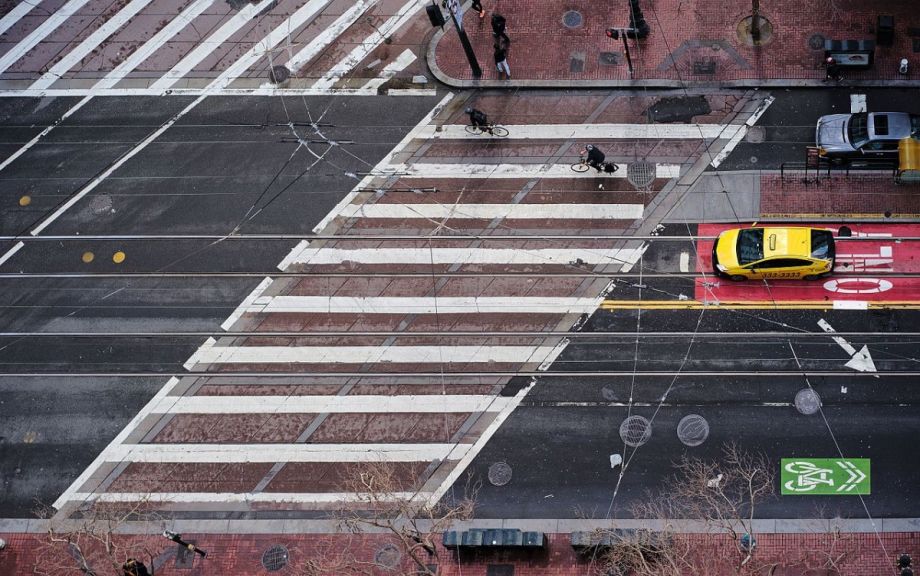 San Francisco’s Market Street is getting a major overhaul to turn it into a more people- and transit-centric thoroughfare. The estimated $604 million project will bring protected bike lanes and streetscape improvements. Private vehicles will be banned — including those from ride-hailing companies. Taxis will still be allowed. Critically for San Franciscans with mobility impairments, the project will make the 2.2-mile stretch of road compliant with the Americans with Disabilities Act (ADA) thanks to new curb cuts and crosswalk alignments and the replacing of old brick sidewalks.

The wide, brick sidewalks were installed over 40 years ago in conjunction with the Bay Area Rapid Transit (BART) subway tunnel construction under Market.

“The sidewalks were widened and brick was installed to signal it as a space for pedestrians,” explains Simon Bertrang, San Francisco Public Works project manager.

But after four decades, those bricks are showing their age. Heavy and uneven wear has created a surface that’s slippery when wet and uneven in many places. The gaps between bricks exceed modern standards.

“If we were approving the sidewalk today, we would not allow that width of joints,” says Bertrang. “They would need to be much tighter in order to make it easier for wheelchairs and other people rolling or walking along the streets. Joints are one of the key issues when it comes to the accessibility of brick.”

In 2013, Public Works hosted a focus group with motorized wheelchair users, manual wheelchair users, mobility assistive device users, and people who were either blind or low vision. The group toured Market Street’s sidewalks and provided feedback in a report. Their biggest concerns were that the brick is slippery when wet, there are uneven surfaces where a replacement brick sits next to an old and worn brick, and there are spots where the mortar between bricks is missing.

“As a general matter, for somebody with a mobility impairment, the smoother a surface is the more accessible it’s going to be for them,” says Autumn Elliott, an attorney with Disability Rights California. “If you’ve got a surface that has a lot of gaps or a lot of abrupt edges it can be hazardous. With something like a brick sidewalk, it would depend a lot on how well it was maintained.”

The ADA Accessibility Guide does not specify what material a sidewalk must be made of to be compliant. Instead it stipulates that sidewalks must have a continuous, smooth surface with no variations greater than a quarter of an inch. The Brick Industry Association has its own guidelines for making brick sidewalks accessible. But proper installation and regular maintenance are key. Because of that, the Federal Highway Administration recommends against brick and cobblestone in its guide to accessible sidewalks and crossings.

Bertrang says the proposed plan is to replace the bricks with a pre-cast concrete paver of some kind. “It would allow us to get the feeling of a higher-quality material than [standard] cast-in-place concrete, which also has a lot of variability and is dependent on the install,” he says. “We might include different color or mica flakes to give it a little sparkle.”

In addition, Public Works is updating the curb ramps for ADA compliance, making sure curb cuts are aligned from one side of the street to the other, adding curb cuts to the transit islands, installing audible pedestrian signals, adding curb bulbouts where possible to shorten crossing distances, and more.

Beyond the Market Street project, the city has a program to update out-of-compliance curb cuts around the city. Despite that, the city still may not be doing enough to meet ADA accessibility requirements. A class action lawsuit by 21,000 San Franciscans with mobility impairments alleges that the city has not provided sufficient access to public parks, recreational facilities and sidewalks. A federal judge ruled in favor of the city, but a U.S. Circuit Court judge recently overturned that ruling.

Accessibility and noncompliance lawsuits are common. (In fact, a 2003 lawsuit against the city of Sacramento established that sidewalks are covered under the ADA and that it’s the responsibility of municipalities to ensure compliance.)

“Unfortunately a lot of municipalities don’t pay attention to these issues or the needs of their constituents with disabilities unless there’s a lawsuit that forces them to pay attention,” says Elliott. “If you take a walk down the sidewalk in most cities you’ll see gaps in the sidewalks, areas where tree roots have been allowed to raise the sidewalks, and other things that create these kinds of gaps or large slopes on the sidewalks.”

In 2015, Los Angeles settled a lawsuit with a $1.3 billion agreement to fix broken sidewalks and install other compliant infrastructure over the next three decades. That same year, Cedar Rapids, Iowa, settled a Department of Justice compliance investigation with a $15 million pledge to build accessible infrastructure. In July, Seattle settled a lawsuit with an agreement to build 22,500 curb cuts over the next 18 years. Those are just a few of the many dozens of ADA compliance lawsuits against municipalities and private companies in the past few years.

Though the plans are in motion, a fully compliant Market Street is still many years off for San Francisco. The city does not have full funding for the project. Because of that, the overhaul will happen in several segments with the first slated for construction by the end of 2018.