From S.F. to Zimbabwe, This Bus-Turned-Shower Is About More Than Getting Clean – Next City

From S.F. to Zimbabwe, This Bus-Turned-Shower Is About More Than Getting Clean 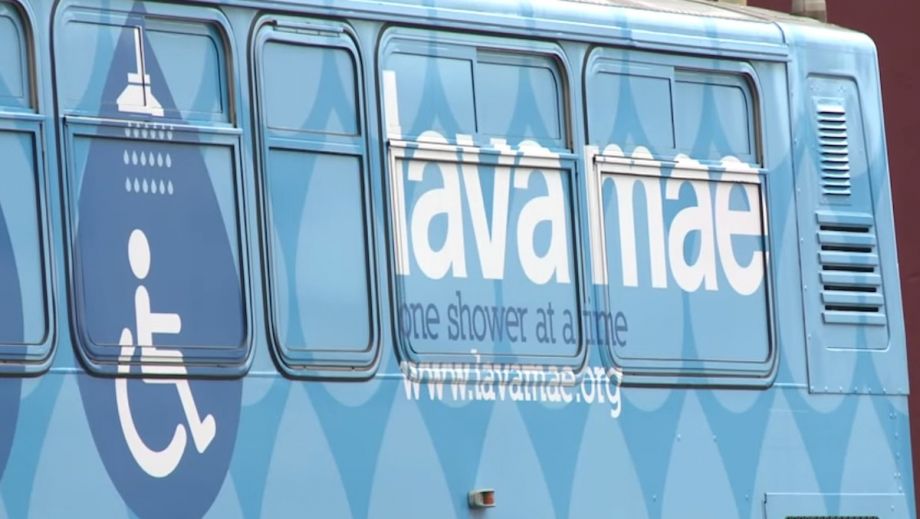 In San Francisco, a Lava Mae bus offers access to showers and other accoutrements of hygiene for people experiencing homelessness.

A bus — in its most classic use, as a mode of transit — is a mainstay of sustainable, accessible urban life worldwide. In the developing world, buses and bus terminals also often function as hubs of informal commerce, with smallholder farmers transporting goods to market and sellers pitching products, including healthcare ones, to near-captive audiences.

Now, the bus in the developing world could take on another role — as showering facilities. In San Francisco, a nonprofit project called Lava Mae is already deploying decommissioned city buses, renovated to hold showers and other accoutrements of hygiene, on that U.S. city’s streets for use by people experiencing homelessness. Through a magnanimous approach to sharing its insights, the organization might soon also effect change in cities worldwide.

Lava Mae (a play on the Spanish words for “wash me”) is still in startup mode, but the idea has already proved compelling to people worldwide. “When I started Lava Mae … I had no vision beyond San Francisco,” says Founder Doniece Sandoval. “But I started getting contacted by organizations and individuals from as far away as Zimbabwe,” with questions on how to replicate her project.

Quickly — and rather unusually — Sandoval agreed to share information on budget, strategy and design. Although some initially interested parties fell away, she says a project in Honolulu, has announced plans to have shower buses running within the next year, and she notes a group in Zimbabwe, is serious too.

Much of urban Zimbabwe is affected by a years-long water supply crisis, precipitated by poor management, population growth and climate conditions. Reports from Human Rights Watch and other international groups detail deficiencies in access to water grave enough to contribute civil unrest. Zimbabweans who must use unclean water are vulnerable to diarrheal diseases. Clean showers could be a part of communal peacekeeping or outbreak control — a vitality beyond even San Francisco’s noble emphasis on human dignity.

Of course, sending out the buses is one thing in Kalamazoo, and quite another in Zimbabwe. First, different bus models require different retrofits. Sandoval says that the Zimbabwean group, Chitungwiza Progressive Residents Association (CHIPRA), “will be using school buses, so, obviously, major modifications of the design” are in order, although she adds that “thinking through the layout, it’s somewhat similar.”

The water supply might be a tougher issue. In San Francisco, the organization draws water from fire hydrants and dumps dirtied water into sewer drains, and the city’s infrastructure can accommodate this. These options allow the bus to carry not much more than a water-heating system, a boon for design and lightweight operation. The same possibilities aren’t available in a place like Chitungwiza, an urban community of some 365,000 people near Zimbabwe’s capital of Harare. Admire Mutize, a CHIPRA representative and Lava Mae’s contact in the area, calls his community a “shanty town or slum,” and says, “There are no sanitation services, especially water and sewage.” This isn’t just true for people who sleep in the streets, but for people with homes. It’s a challenge virtually no project in a developed city would have to surmount.

Sandoval notes that freestanding water tanks, water pipe-splicing and bladders to hold waste water are possible options for adapting to underdeveloped sanitation systems. What the Chitungwiza group will ultimately do is not quite clear. Mutize says, “We are trying to adopt a model” that will work within local constraints.

By necessity, that model might deviate even farther from the San Francisco plan. Mutize emphasizes the group’s pressing need for funding, and he admits they’ll need to seek user fees: “We will be charging an access fee because we need some funds to run it … and also for maintaining.” He describes “one million dollars for around thirty minutes’ access,” a very small sum in the country’s mind-bogglingly devalued currency.

For her part, Sandoval says she wants the project to focus on providing free showers to the homeless and most vulnerable within a community. Of course, the project wasn’t originally intended for a city where hundreds of thousands need shower services — but Lava Mae’s unusual openness might accommodate such a shift.

“It’s best to adopt the attitude that you’re designing with, not for, stakeholders,” advises a recent Harvard Business Review article about companies creating products for developing and developed economies. But Lava Mae has already gone one step farther: Its open-source approach allows Zimbabweans, who are better than anyone at understanding their own context, to design and control the project themselves.

In this way, Lava Mae’s emphasis on human dignity extends past the shower itself — and, in so doing, might scale an array of design challenges that would be daunting for anyone.