Failed U.S. Streetcar Experiment Goes Out With a Whimper – Next City

Failed U.S. Streetcar Experiment Goes Out With a Whimper 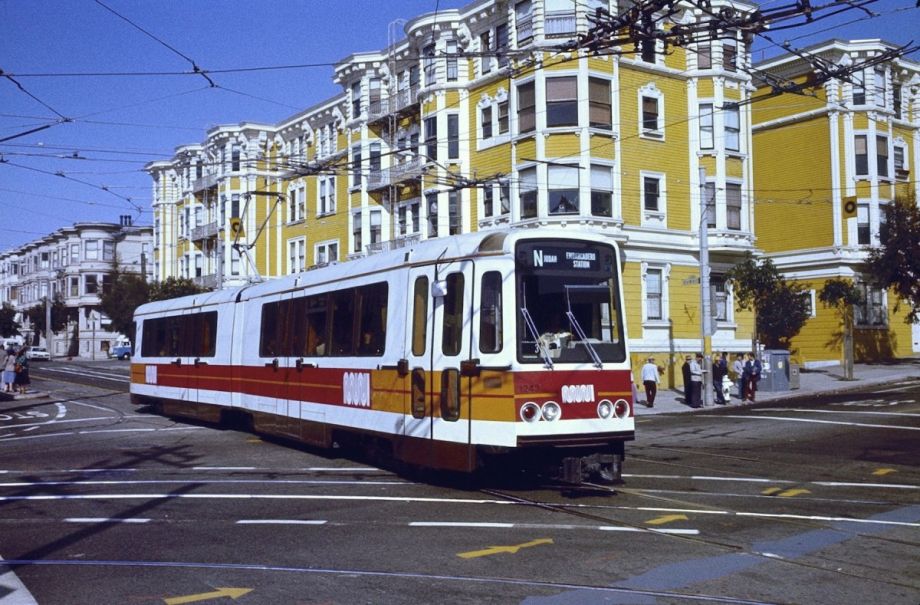 A San Francisco LRV, built in 1979 by Boeing, runs eastbound on Duboce Avenue at Church Street in 1980. (Photo by Steve Morgan)

A failed experiment in reviving the American streetcar industry in the 1970s will finally die not with a bang, but with a whimper, in the last U.S. city to sign onto it, San Francisco.

According to a San Francisco Examiner report, the city’s Municipal Transportation Agency will scrap its last two remaining Boeing Vertol LRVs this week.

The Boeing Vertol LRV was a federally-backed effort to develop a new standard light-rail vehicle for U.S. cities in the 1970s. Originally, seven cities that still had streetcar service were to buy the cars, but as the development of the vehicles proceeded down a glitch-filled path, all but two, Boston and San Francisco, backed out of their commitments.

The cars that were built proved to be lemons in both cities. Doors jammed regularly, their siding rusted and they broke down as often as they ran. “Muni management hated them for their unreliability,” said Rick Laubscher, head of the city’s Market Street Railway historic preservation group.

That organization has no interest in acquiring either car for operation on the F-Market historic streetcar line because, as an SFMTA official said, “the Boeings didn’t run particularly well when they were in regular service.”

Muni began retiring the clunkers in 1995, and the last one left service in 2001. Two of the Boeing LRVs reside in transit museums on the West Coast. The two being scrapped were also being held for museum acquisition, but no museum expressed interest. They could be saved at the last minute, though: The SFMTA is willing to give them away to anyone with a place to store them who’s willing to pay to have them hauled off the property.

The proposed modern streetcar line connecting Santa Ana and Garden Grove in Orange County, California, took a major step toward realization last week when the Orange County Transportation Authority’s board of directors approved a set of actions to advance the project. Railway Track & Structures reports that the major moves included:

The 4.1-mile line enjoys strong support from both local officials and the Feds, who have pledged to provide $125 million of its projected $289 million cost. Construction of the line should begin in late 2017; the line should open for service in 2020.

The city of Liège in Belgium’s French-speaking region of Wallonia is starting over with its effort to build a 12-km (7.45-mile) light-rail line from Sclessin to Bressoux via the city center by rebidding its concession to design, build, finance and maintain the line through a public-private partnership.

An article in Railway Gazette International explains that Société Régoinale Wallonne du Transport had awarded to MobiLiège, a consortium of Alstom, BAM PPP PGGM and DG Infra, in September 2014 to design, build and maintain the line, which would be operated by the regional bus and tram operator TEC. But work on the project was halted the following March after the European Union’s statistical office, Eurostat, ruled that the level of state participation in the DG Infra partnership made the entire €380 million ($430 million U.S.) package public financing that counted against the Wallonia regional government budget.

After Eurostat rejected a resubmitted proposal two more times, the Wallonian regional government analyzed the risks and financial impact to its budget of several scenarios before deciding to finally abandon the original contract and rebid the project. The rebid will delay its completion until at least 2022 and cost the SRWT at least an additional €1.6 million ($1.81 million U.S.) in cancelation fees beyond the €33 million ($37.3 million U.S.) already spent on preliminary work.

Know of a project that should be featured in this column? Send a Tweet to @MarketStEl using the hashtag #newstarts.