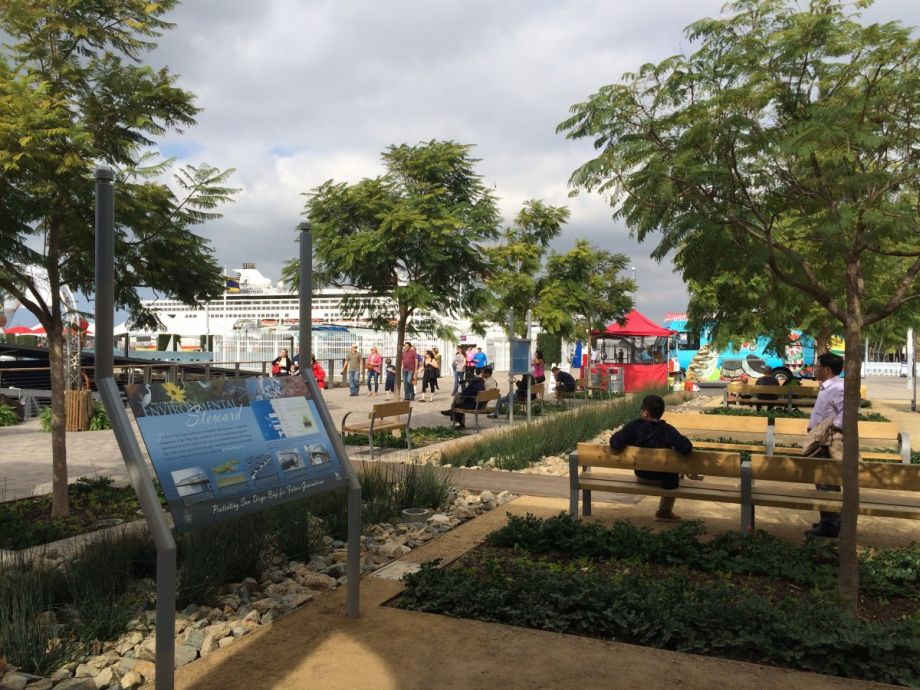 When San Diego laid out a vision for its waterfront in 1998, the North Embarcadero could have been any city’s under-utilized bayside space. Once a throughway for Navy and fishing traffic, it had been “cut off from downtown with large expanses of asphalt,” according to one document, including roads, large parking lots and superblocks that literally isolated the city from what had once been its front door.

Nearly 20 years later, parts of that original wish list are finally taking concrete form. A ribbon-cutting in mid-November revealed a waterfront very different from the one described in ’98, featuring a wide esplanade flanked by landscaped plazas and jacaranda trees that turn bright purple when they flower in spring. Contractors had removed parking spaces and even relocated a road to make room for the 1,000-foot walkway, which forms the backbone of the North Embarcadero Visionary Project’s $31 million “phase one.”

“It’s supposed to be a kind of hallway connecting the city to the water,” says Scott Jordan of Civitas, the urban design firm that shaped this transformation. This idea of reconnection is visible in every part of the new park’s design.

According to Jordan, not only did roads, parking lots and railroad tracks sever the city from its long-estranged waterfront, a number of odd design features had reinforced the notion of function (for cars and ships) over form. For example, one of the roads leading to the piers sloped oddly, which Jordan says probably had to do with flood protection at one point. But for visitors, it created a sensation of rising in elevation as they neared the water — taking them up and away instead of leading smoothly down to the bay-side edge.

The city’s original vision contained a number of ramps and stairs to accommodate slapped-together-over-the-years levels like these, but Civitas wanted the park and esplanade to be smooth, level and completely ADA compliant.

“We wanted it to be as usable as possible for everyone,” Jordan says.

Along with smoothing out the area around the massive walkway, Civitas designed the new embarcadero as a two-way connector. With cruise ships docking — “thousands of people embarking and disembarking on a given day,” Jordan explains — the space needed to invite foot traffic into the city, as well as toward the water. New pavilions and buildings will eventually house kiosks selling tickets for trolley and boat rides, cementing the area’s status as a literal border between land and water.

Though all sorts of barriers had been erected between the people and the waterfront over the years, nothing had historically kept stormwater from sweeping street-level pollutants straight into the bay. Now, an eight-foot “water quality band” purifies runoff from the nearby streets and walkways using soil, gravel and mulch.

But though phase one is finally the gateway city that port leaders envisioned all those years ago, the project faces financial uncertainty going forward. Redevelopment funds are responsible for around half of that $31 million, and when California Gov. Brown dissolved city redevelopment agencies to balance the Golden State budget in 2012, phases two through 10 (slated to cost around $200 million) began to look less like a reality and more like another ’98 wish list.

When redevelopment was terminated, San Diego’s various agencies active in the field merged to form Civic San Diego. Brad Richter, a representative for that organization, explains that it’s a kind of successor agency responsible for continuing several of the projects put into motion before 2012 — including the north embarcadero. But he says that no redevelopment funds are available beyond phase one.

Redevelopment’s demise “will definitely impact how we move the later phases,” he says.

But Richter has worked in San Diego redevelopment for around 16 years, so he’s seen phase one move slowly but steadily from wish list to reality.

“We’re hoping that now that phase one is completed, people will see what the waterfront can be and we can extend those improvements all along the bay front,” he says.