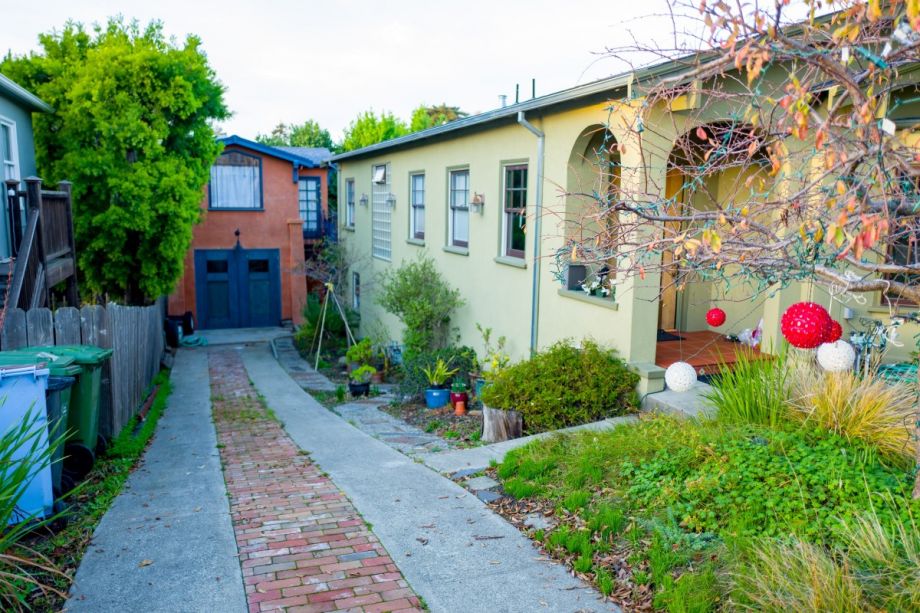 Caitlin Bigelow grew up in La Mesa, a San Diego suburb. “My parents were both journalists,” she said, until her mom quit her job to care for Bigelow and her brother. “Money was tight on one salary. They rented out the granny flat that was attached to the garage. It was teeny tiny, but they rented to a SDSU student and that was the difference that paid the mortgage.”

It’s this distant memory that fuels Bigelow’s passion for accessory dwelling units — small secondary units that share the property of a larger, more primary home. “I grew up seeing the benefits that these bring to families, not only economic stability but social stability. Grandparents can live on the property with you. There are so many wonderful things about these units,” she says. “When I saw [California’s] regulations passed in 2017 that allowed homeowners across the state to build these things, I thought ‘this is going to be a game-changer for families and for California,’ so I quit my job and started Maxable,” a company that offers ADU consulting and services to Californians.

As Next City previously reported, the regulations Bigelow refers to are a set of reforms passed in 2017. As of this year, additional state laws were put in place to further promote the development of ADUs, this time including “junior accessory dwelling units” which the state considers to be ADUs that total 500 square feet or less. The driving force behind these changes is a desire to build more ADUs as a response to the state’s growing housing crisis. In many California cities, vast expanses are dedicated to single family zoning, even as housing prices are out of reach for many. In San Diego, the housing crisis is especially dire—just 24 percent of households are able to afford the median home price in San Diego County: $655,000.

“San Diego is really limited in the amount of vacant land left to develop. A lot of that is due to its environmentally sensitive lands,” says Gary Geiler, the development services director for the City of San Diego. “We protect a lot of canyons and hillsides. Half of the floodplain area is beaches and bluffs, so the developable land is pretty much developed, so we’re looking at fill-in development to add housing.”

One of the strategies San Diego County deployed last fall to further support ADU development was offering free, pre-approved ADU floor plans and waiving $15,000 in permit and development fees to reduce the costs associated with construction.

“We’ve had companion unit regulations on the books since the 90s,” Geiler says, “but they were more design-oriented and required conditional use permits. We didn’t get a lot of applications, maybe 10 in a year.” These days, those numbers are way up. “In 2017… we got an increase of over 100 applications that first year, so we said, ‘OK, we’re onto something here.’” The city has since done away with even more fees. “The applications increased even further,” Geiler says. “We had probably over 300 applications in 2018 and over 600 in 2019. So far we have about 200 new units this year and about 1,000 units applied for.”

While Bigelow is quick to give the city and county credit for all they’ve done to promote ADUs, she sees room for improvement when it comes to the pre-approved plans. “What it means is that those plans have structural pre-approval. It doesn’t mean that you can go into the county office, choose a plan, and pull a permit,” she says. “You still have to hire an architect or a designer to draw up a plan to show how it will fit on the property to show that it’s still in compliance.”

She also just doesn’t like the pre-approved plans. “They’re not good,” she says. “The plans aren’t what people are looking for. They have a 650-square-foot studio which is a nice size large one-bedroom. It shouldn’t be a studio. The other is an 800-square-foot one bedroom and it should be a two-bedroom.”

Bigelow also says that while the pre-approved plans can save money on the design and planning side of things, the construction associated with them isn’t necessarily the cheapest.

She’d like to see San Diego take an approach more like San Jose’s where the city opened up the plan design process to local design professionals and created something of a library of plan choices that offer more variety to meet the needs of different homeowners. In San Jose, that library and its easing of zoning requirements has led to an increase from the city issuing 15 ADU permits in 2015 to 414 in 2019. Through July 2020, San Jose has issued 191 permits. She also sees the efforts of cities like Minneapolis which have done away with single family zoning entirely as another major step in the right direction for the proliferation of ADUs.

As the San Diego push for ADUs is meant to increase available housing stock, the city has restricted renting them out for terms less than 30 days, as an attempt to discourage short-term rentals on sites like Airbnb.There have been reports that homeowners aren’t complying, however. “[Short-term rentals] aren’t allowed because… [the program] is for our housing stock, it’s not for hotel or motel kind of uses,” Geiler says. “Most neighborhoods are happy we’re doing that and it’s not going to change anytime soon.”

Geiler and the city continue to improve the city’s ADU processes. He’s setting his sights on further improvements, like reducing parking requirements.