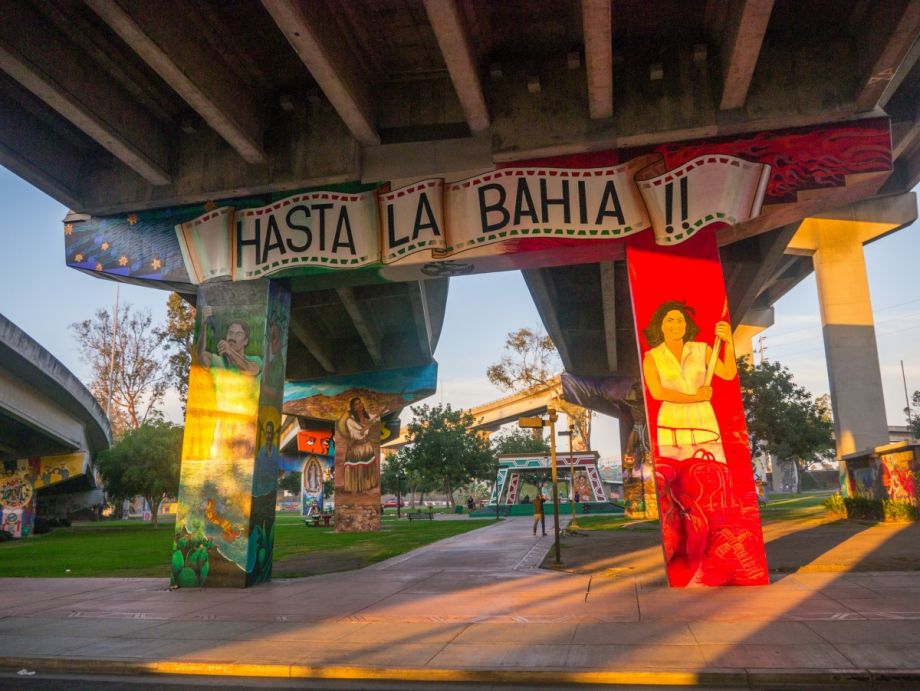 This Chicano Park mural has the phrase “Hasta La Bahia,” which translates as “to the bay,” and reflects community activists' original goal of extending the park all the way to the San Diego Bay. Neighborhood access was cut off by the highway and subsequent coastal development. (Photo by Jay Galvin/Flickr)

Josephine Talamantez, like many residents of San Diego’s Logan Heights, remembers April 22, 1970 as a turning point in relations between the neighborhood’s largely Chicano population and the city government. On what was, coincidentally, the first Earth Day, locals occupied a stretch of land beneath the Coronado Bay Bridge and Interstate 5, demanding that the city make good on a promise to turn the unused land into a public park. Thirty years later, with Chicano Park listed in the National Register of Historic Places and home to the largest collection of outdoor murals in the U.S., Talamantez and the Chicano Park Steering Committee want the city to fulfill one last promise, extracted over 40 years ago. They want San Diego to lease a city-owned building inside park boundaries to the group without opening it up to other bids — so that it can become the future home of the Chicano Park Museum and Cultural Center.

“I think it’s important that that building be returned to the community,” says Talamantez. “I think the city should reciprocate, after all the negotiations and the history that has gone on over the years.”

That history begins long before the creation of Chicano Park, with the segregation of Latino residents in Logan Heights, a neighborhood now more commonly known as Barrio Logan. At one point in its history, the neighborhood housed the second-largest community of Chicanos on the West Coast. Nearly 20,000 residents enjoyed waterfront access to San Diego Bay. But then after World War II, the neighborhood was rezoned industrial, allowing auto junkyards and other uses incompatible with residential life to move in. In 1963, I-5 was constructed straight through the heart of the neighborhood, cutting off beach access. In 1969 the Coronado Bay Bridge, linking I-5 with Coronado Island, was completed. The population dwindled to about 5,000 people. “We lost the bulk of our community to eminent domain,” says Talamantez.

All of this set the stage for the occupation of what would become Chicano Park. With the bridge that had wreaked such havoc on their neighborhood there to stay, residents began demanding a park between the pylons. The state agreed to lease a portion of the land to the city of San Diego and to prepare the site for public use, but when bulldozers arrived on April 22, 1970, residents realized they were not there to create a park, but to construct a California Highway Patrol station. Furious residents, feeling they’d been duped, began to descend upon the land. “We had our own little, what do you call it, ‘Chicano Paul Revere,’” says Talamantez, referencing resident Mario Solis, who went door to door telling neighbors what was going on. The bulldozers halted when residents formed a human chain around them. People began to plant cactuses and flowers; a Chicano flag was raised on a telephone pole.

As one of the co-founders of the park, Talamantez remembers the 12-day occupation vividly. “I think it was just a defining moment, like today they refer to a tipping point. We had just had it, being treated as second-class citizens, and just always disregarded, unheard,” she says. “We had contributed to the economic, political, social, cultural development of the city of San Diego and it wasn’t acknowledged, it wasn’t appreciated.”

Now she and the Chicano Park Steering Committee, which was established during the occupation, want that contribution acknowledged. An agreement to develop the park was formalized on July 1, 1970, after negotiations that, Talamantez says, included a verbal agreement that an adjacent city-owned building could be used for social services. For a time it was, but when the service providers moved out in 1979, the San Diego Community College District rented the space for adult education. The community understood that lease to be a short-term arrangement while the college built another space, says Talamantez, but a campus wasn’t completed until fall 2015. “We didn’t realize they were going to take 37 years to get out!” she says.

Now that the college is vacating, she wants the city not to put the building out for bid, but to allocate it directly to the Chicano Park Museum and Cultural Center, a power the city council is vested with. Council Member David Alvarez, who grew up in the neighborhood and represents the district, agrees there is a need. “There is no welcome center, there is no central location where the thousands of visitors who come to learn about the history and Chicano Park can learn a little more,” he says.

The murals that adorn nearly every pylon and bridge support, for example, could use some context. In 1969, artist Salvador Torres conceived of the Chicano Park Monumental Public Mural Program, which from 1973 until 1989 brought Chicano artists from San Diego, Sacramento, Los Angeles and farther afield to paint the park’s pylons with images of pre-Columbian, colonial, modern and contemporary Mexican history and culture. Murals are still being created, but it’s the art from this period, begun during the heart of the Chicano civil rights era, that’s recognized on the National Register of Historic Places.

“The murals and the park are an open-air museum, but we need also an information center,” says Talamantez. Steering committee chairwoman Tommie Camarillo has an extensive collection of records, photographs and ephemera related to the park history, which would be housed at the museum, along with oral histories of neighborhood residents. The museum would also focus on art and science — including the engineering of the bridge itself, and the biology of the nearby bay. Talamantez envisions community events that will foster the transmission of intergenerational knowledge, like alternative modes of healing and sustainable ways of living, like growing food at home.

From the city’s perspective, Alvarez says he doesn’t see why the building shouldn’t be turned back over to the community, and he’s supportive of supplying some municipal funds to prepare the building for use. Talamantez estimates the group needs about $8 million to upgrade the aging building and renovate it for use as a museum. A local architecture firm has already donated design work for the retrofit. Until the city decides whether to lease the building, Talamantez says the museum group will work on fundraising and creating a digital platform to make the oral histories and archival materials available to the public.