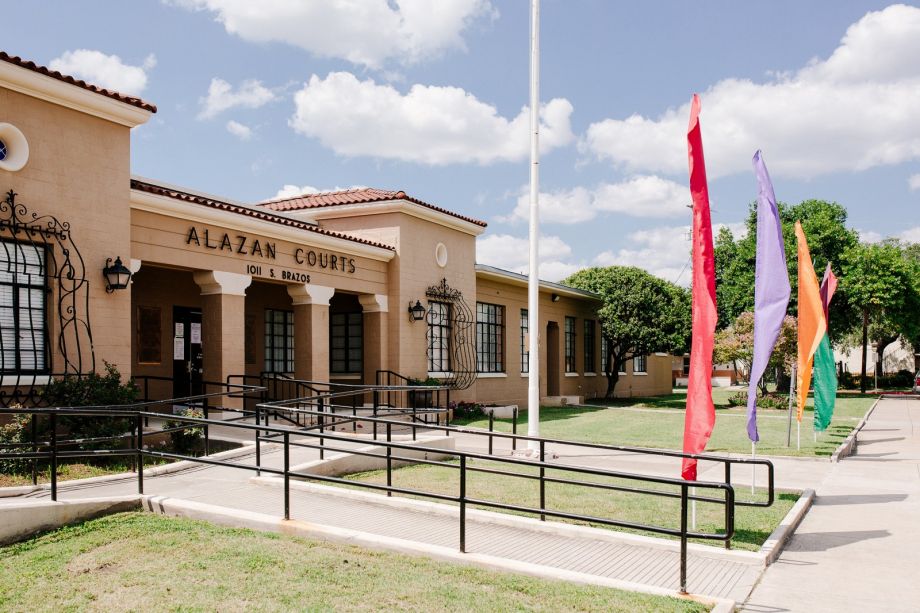 The San Antonio Housing Authority is backing away from a plan to demolish a large, historic public housing complex that was opposed by former and current residents, according to a report in the San Antonio Express-News. The complex, Alazán Courts, was listed on the National Trust for Historic Preservation’s “Most Endangered” list and scheduled to be demolished and replaced with mixed-income housing, as Next City previously reported. The Housing Authority’s board had recently voted to approve the plan.

“But under the direction of a new leader, the agency reversed course in January, pledging to rebuild public housing for the city’s most financially vulnerable residents,” the Express-News reported.

Instead of replacing the complex with mixed-income housing and offering rental-assistance vouchers to its residents, the Authority now plans to rebuild the complex and replace each unit of public housing “at a minimum” one-to-one ratio, according to the report. The new plan marks a stark departure from “a 30-year trend toward privatization” in public housing nationally, the report says. It’s not totally clear how the Authority will pay for the project, which could cost an estimated $50 million, according to the report. The Authority currently has an underfunded maintenance backlog, the story says. But the new plan is to demolish and replace some of the units in phases, rather than raze it all at once and displace everyone, according to the story.

“We became concerned that it was really going to become destructive to [residents’] lives,” Ed Hinojosa, the San Antonio Housing Authority’s interim president and CEO, told the paper.

California State Assemblymember Alex Lee has introduced a bill calling for a massive infusion of social housing in the state, according to a report in the San Jose Spotlight. The bill promotes social housing, owned and operated by the public and affordable to people at a wide range of incomes, as a solution to California’s long-simmering housing crisis. It cites successful examples of social housing in Vienna and Singapore, where majorities of residents live in apartments owned by the government, according to the report.

“Families are increasingly being priced out of the communities they’ve built and are leaving California for more affordable housing markets,” Lee said in a press release. “We have an opportunity to reshape how we view housing – not as a commodity, but as a fundamental human right. Social Housing is how we provide housing as a human right.”

The bill itself is a declaration of intent to build statewide social housing, rather than a mechanism to actually implement it. Lawmakers in New York recently called for a massive investment in social housing as well, as Next City reported. In all cases, social housing programs still require large infusions of new money from the government.

“I think it comes down to the investment,” Ray Bramson, the chief operating officer of Destination: Home, a public-private partnership that works to reduce homelessness in Santa Clara County, told the San Jose Spotlight. “This is a strategy that can and will produce large housing opportunities at scale, but it needs a deep financial investment and commitment from the state to make it feasible and a reality.”

In Hawaii, State Senator Stanley Chang has introduced a slate of bills aimed at addressing the state’s housing shortage, according to a report in Maui Now. The bills include a reintroduction of Chang’s ALOHA Homes proposal, which Next City has covered. The proposal, inspired by Singapore, would direct the state to build around 65,000 social housing units on state-owned land near transit stations. Another bill would create a system of “housing savings accounts,” calling on employers to let workers contribute to the accounts through payroll deductions, according to the report. In a separate op-ed, Chang wrote that Singapore’s residents use income withheld by the government to pay for housing. His proposal would allow Hawaii workers to create the accounts but would not require them to use the money for housing or any other purpose.

A third bill would declare all state-owned land within a mile of a rail station as “important state lands to promote the development of homes priced below market rates for Hawaii residents who are owner-occupants and own no other real property,” and require state and local tax and planning policies to promote their use for housing. The final bill would place the Hawaiʻi Community Development Authority, Hawaiʻi Housing Finance and Development Corporation, the State Office of Planning, and the Hawaii Public Housing Authority all under the direction of a new state Department of Housing.

“This COVID-19 pandemic has highlighted the critical need for government to take this housing crisis seriously,” Chang said, according to the report. “These bills provide innovative solutions to our housing crisis and I look forward to working with my colleagues as we tackle this issue in the months ahead.”