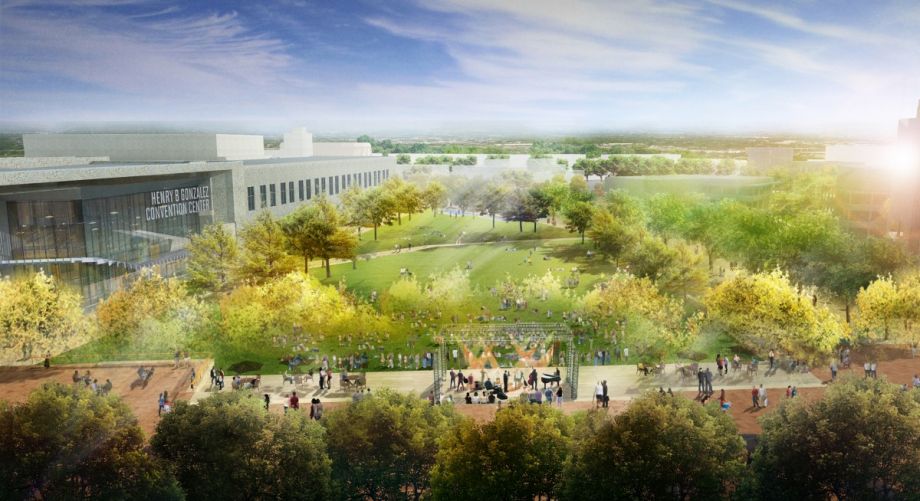 The 1968 World’s Fair brought 6.3 million visitors to San Antonio, kicking off the city’s hospitality industry — and leaving a 96-acre dead zone in its core. In the decades since, that site has continued to host conventions, museums and tourists, but despite the prime location and massive size, Hemisfair has sat largely underutilized. Now the area is being redeveloped into a place locals will want to visit too, a district featuring three parks, mixed-use retail, even housing. The first park, Yanaguana Garden, is already open and receiving high praise. The designers of its next phase, Civic Park, want to see the revamped Hemisfair do more than just provide green space; they want it to reconnect parts of the city that the 1968 development severed.

“When you look at urban parks or urban green spaces, it’d be hard to find another one as situated ideally as Hemisfair park, with the cultural and historical significance of the space,” says Robert Rivard, director of San Antonio publication the Rivard Report. Constructing Hemisfair required razing an entire 96-acre neighborhood, displacing its residents and disrupting the original street grid. The fair grounds were surrounded by a fence to keep the non-paying public out, so the design created a fairly impenetrable cul-de-sac that has separated surrounding neighborhoods and left a space that’s “neglected, inactive and unused, and right in the heart of the city,” says Rivard.

Over the decades, at least a dozen master plans have been developed, but none were brought to fruition. Andres Andujar, CEO of the Hemisfair Park Area Redevelopment Corporation (HPARC), which is overseeing the revitalization, jokes that’s because, contrary to the common saying, form doesn’t follow function, it follows funding. By the mid-2000s with the city growing, it became clear something had to be done with the site. Former Mayor Phil Hardberger backed the creation of a commission to study park redevelopment. The next mayor, current HUD Secretary Julián Castro, made sure $15 million in bond funding went to the project, which became a core element of his “Decade of Downtown” platform — a bid to bring San Antonians back to the urban core.

Yanaguana opened in October. In its first year, Andujar estimates that the all-ages play area — suited for “pre-K to gray” he says — will attract half a million visitors. At approximately 125,000 visitors per acre, that would make it not only the most highly visited park in San Antonio, but also possibly the highest use-per-acre park in Texas.

The designers of the next phase, Civic Park, are hoping to build off that success, creating a space for locals and recreating long-severed connections. “One of the big challenges for Civic Park and Hemisfair is this is a place that has been disconnected from downtown SA for quite a few years, since the time of the World’s Fair,” says David Malda, senior associate at landscape architecture firm Gustafson Guthrie Nichol (GGN).

“Subsequent projects of large-scale roads, freeways, all that, have kept it isolated from neighborhoods that are, today, growing rapidly. So we needed not only to create a new park to replace an old park, we needed to engage really a kind of urbanism that looked at how do you build more of the city, how do you connect vibrant parts of the city as much as possible.”

Civic Park occupies the northwest portion of the site, adjacent to the highest pedestrian density corner in the entire city. Whereas Yanaguana Garden is a very active space, with programmed play for children and adults, Civic Park combines areas for public gathering and celebration with more contemplative zones. To arrive at their design, GGN dug into the history of the city, starting with its natural geology, and held public meetings that ranged from small, focused sessions to large town halls with hundreds of participants.

“One of the key things that we repeatedly heard … was this was to be a park for San Antonio, for the residents of San Antonio, and not just another tourist destination. So for our process that was really important to know what that meant,” says Malda.

The firm researched how water has shaped the city, from the original acequias (or irrigation canals) built by the Spanish, to the way the San Antonio River, below street grade, creates a layered city. They were inspired by the natural limestone formations of the region, and the spring at the source of the San Antonio River. Using what they learned, GGN presented a story to residents — a vision of the park that was a vision of San Antonio, not just a laundry list of paving tile designs.

In return, they heard what residents wanted: a plaza for large celebrations, a great lawn, a water feature area, smaller courtyards, gardens and groves for shade. In the final design, the highly trafficked northwest corner forms the great entrance, with a fountain that pays homage to the source of the San Antonio River and space for the large gatherings for which the city is known. (“We as San Antonians, we have a city that knows how to party,” says Andujar.) From there, a wide, tree-lined promenade continues into the heart of the park, subtly recreating the street grid that was lost and providing a connection to Yanaguana Garden. A shallow ribbon of water follows the promenade as it skirts past the great lawn and ends at the Shallows, where pools of water fluctuate in response to its availability or scarcity. “That dynamic aspect of water — that it’s not just a given, but something to be aware of and attentive to — motivated that,” says Malda.

The design also features a stepped descent down to the San Antonio River, providing a connection to the RiverWalk. Stormwater will likely all be collected on site, potentially tied into the city’s purple pipe system, and possibly recycled for park features.

Land to the north and west of the park — not on parkland — is set aside for commercial development. HPARC has a long-term ground lease with the city that allows the nonprofit to contract with private sector developers for projects. By the time the entire project is complete, 1,500 to 2,000 residential units will be built on site. “How we bring the community back here is not only by having great events that attract the locals, but literally putting residents in the district,” says Andujar. Minimum 10 percent and maximum 50 percent of the units are required to be workforce housing, defined as affordable to those making between 50 and 110 percent of area median income.

Ground-level retail will be required to host “park-activating” uses: Bars need to have live music on Friday nights; a coffee shop might host Sunday morning yoga. By 2021 the rent paid to HPARC by these commercial developers — plus a few other income streams — should provide the income to maintain, operate and activate the park “forever,” says Andujar. He backtracks. “Forever is a long time, so I’d put an asterisk on the forever comment.”

Just as Yanaguana Garden received $8 million in bond funding in 2012, HPARC is also hoping the 2017 bond will include funding for the rest of the project, as much as $58 million. The rest Andujar hopes to raise through philanthropy.

HPARC is aiming to open Civic Park by 2020 — the end of the “Decade of Downtown.” The final phase, redeveloping the area around the Tower of the Americas — a vintage futuristic observation tower a la Seattle’s Space Needle — could be completed by 2022.