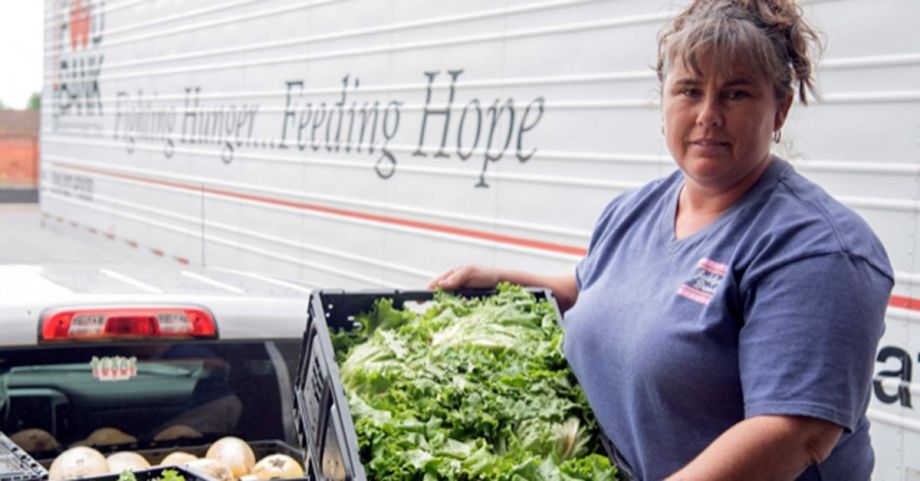 Sarah Baray, the CEO of Pre-K 4 SA, a city-funded early childhood education program, has been receiving photos of children opening boxes of food all week.

Over the past several days, the Pre-K 4 SA staff has partnered with the San Antonio Food Bank to hand out more than 1,000 grocery boxes to students and their families.

Some students have gotten to see their favorite teachers staffing drive-thru pick up lines. For others, Pre-K 4 SA has delivered meals to their doorstep.

Normally, Pre-K 4 SA works with the food bank to provide breakfast, lunch and snacks for their nearly 2,000 students. However, because the novel coronavirus outbreak has shut down much of the city and caused job loss or food insecurity for many, they have shifted to providing boxes of food for the entire family.

“It helps [families] and their children know they are not alone,” Baray says. “It helps them to know that we are in this together … and that we are going to figure things out and it’s going to get better.”

The partnership with Pre-K 4 SA is just one way the food bank has been getting extra help out to the community.

The San Antonio Food Bank quietly began handing out extra food in February. Grocery stores were still stocked, restaurants were open and most Central Texans were going about their normal lives, but Eric Cooper, the president and CEO of the food bank, was worried.

Since joining the food bank in 2001, he has overseen relief efforts for dozens of floods and hurricanes, including Hurricane Katrina. He knew the COVID-19 pandemic would be different.

“Obviously, like everyone, we were watching as things started to snowball,” Cooper says.

Cooper knew it would be hard for his clients to prepare. Food assistance programs, like SNAP and WIC, do not stretch to allow families to stockpile. Soon, grocery stores shelves would be emptied.

“Obviously, there’s some stress with that because, you know, the food in our inventory is limited and we wanted to start to give more people more food,” says Cooper. “It’s that leap of faith that the community would kind of backfill us and support this effort to try to make sure those that are most vulnerable were stocked and prepared.”

In early March, the food bank launched a month-long, $1.5-million Coronavirus Preparedness and Prevention campaign with the goal of giving 300,000 boxes of food and cleaning supplies to people in need. Meeting this goal would mean adding 15 million extra pounds of food to their distribution.

By mid-March, things had gotten worse. City leaders ordered restaurants to shut their doors until April 19, causing many workers across the city to lose hours or be laid off. Schools closed, leaving many families unsure of where to access free meals. Grocery stores continue to struggle to keep shelves full.

“Oftentimes, it doesn’t matter what you had, the situation will impact everyone,” Cooper says. “You may have never been hungry before and now, because of this event, you’re rendered in need. So food banks, I believe, should be responding to their entire community.”

The food bank faces additional challenges. Volunteer turnout is down as corporate groups began working from home. Normally, local stores donate food, like day-old bread, to the food bank, but there has not been much left on the shelves.

Cooper says the key to responding to the crises is being flexible and working with the community. The plan eveloves every day.

The food bank ramped up its home deliveries for seniors in need and started drive-thru distribution centers. It increased staffing for its call center and started preparing ready-made meals to strengthen local school districts’ food programs.

The food bank reached out to families and individuals to volunteer. Volunteers were checked at the door for fevers and the number of people each shift was reduced to match city gathering limits. On Monday, March 23, city and county officials announced a shelter-in-place order for the city.

The food bank is considered an essential business, thus volunteers and employees are allowed to continue working, but the food bank made the decision to suspend volunteer shifts until April 9.

The food bank said it will continue to provide its complete services through its employees and partners.

The contents of the food boxes have been changing, too. Ideally, the boxes contain a mixture of fresh food and nonperishables, along with cleaning supplies and pet food for those who need it.

Then the food bank ran out of hand sanitizer. Canned beans and chilli are hard to find.

“There’s times when, honestly, you miss the mark,” Cooper says. “You don’t have enough of the right item, but for the families that are receiving it, oftentimes they’re very grateful for just any help.”

“We are kind of a gap filler, but I don’t know that we could fill the gap that could be created by COVID-19,” Cooper says. “There definitely needs to be a public response.”

Despite the struggles, Cooper says the food bank has been successful getting a significant amount of food into the community.

“With social distancing my husband and I created a game plan … I would be the person in our household to leave for groceries. Some days I can find eggs, sometimes I’m able to find toilet paper. I feel like I’m my family's first responder,” says Karen Gomez, who picked up food from the San Antonio Food Bank last week. (Photo courtesy San Antonio Food Bank)

Feeding America, a nonprofit network of more than 200 food banks, says the San Antonio Food Bank has been a leader during this crisis.

Feeding America created a COVID-19 task force to address the pandemic and Cooper is one of the members.

“One of the reasons we selected San Antonio and Eric Cooper to be on the task force is because we know that they have an incredible amount of experience dealing with disasters,” says Zuani Villarreal, Feeding America’s director of communication.

Currently, the food bank has raised $208,050 through their public campaign. SeaWorld donated 6,000 pounds of food. USAA, H-E-B, the Tim Duncan Foundation and other local organizations have also stepped forward to provide support.

“Hands down, this is unprecedented,” Cooper says. “I mean … Katrina was huge. We had 25,000 evacuees that we were trying to provide breakfast, lunch and dinner. Potentially, COVID-19 could impact way more than 25,000 people. And I think right we’re not responding at that level, but I think in the back of our minds there’s some anxiety how far this will go.”

Cooper says they are focusing on helping seniors, children and recently unemployed individuals. They are depending on community support until there can be a large scale government response.

“We are going to give what we have until we don’t have any more,” Cooper says.

Darcy Sprague is a freelancer based in Austin, Texas. She writes about education, housing, politics and vulnerable communities.