20th-Century Land Use Policy Nearly Killed the Salton Sea. Could Today’s Urban Policy Save It? – Next City 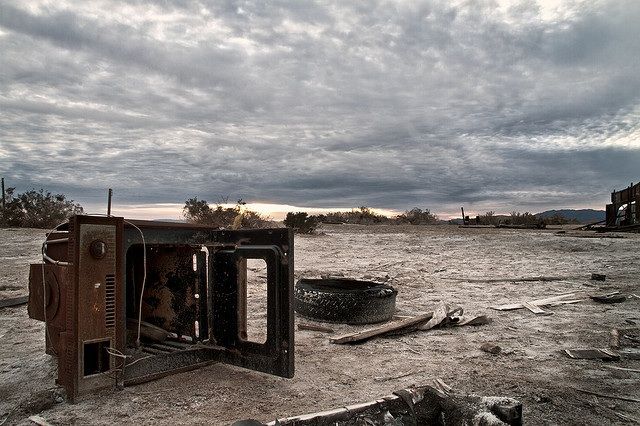 The Salton Sea, Southern California’s accidental oasis-turned-environmental tragedy, is the kind of disaster for which 20th-century U.S. policymakers only have themselves to thank.

Sitting 150 miles east of Los Angeles in the dry and hot Sonoran Desert, the Salton Sea is a 375-square-mile accident of nature, industry and real estate. It’s the largest inland body of water in California, but it’s saltier than the ocean, and the diversity of fish and wildlife it can support is diminishing. And below the surface is a seabed of contaminated soil that, once dried, turns to a toxic dust that is already posing public health risks.

Oh, and the sea is evaporating rapidly, which means more toxic dust being released into the air.

On the shore, decaying wooden bungalows developed during the area’s brief mid-century stint as a resort offer the illusion that the whole place could simply be an elaborate set for a dystopian horror movie made in the 1950s.

Each one of these problems remains unresolved, and scheduled changes to the sourcing and availability of the sea’s imported water promise to make each one worse.

The solutions are out there: Official warnings, proclamations and restoration plans have been made at the local, state and federal levels repeatedly since the 1960s. The only problem is that most of those proclamations and plans haven’t translated into much physical action to actually address the toxic soil, the evaporating water, the retracting utility as a migratory bird stopover, or the persistent Southern California question of where, exactly, to get the water needed to prevent an epic environmental cataclysm. State officials have estimated it would cost some $9 billion to fully restore the sea.

Hoping to edge that full-scale restoration toward implementation, President Obama’s proposed federal budget for fiscal year 2014 includes $200,000 targeted specifically at the Salton Sea. It’s the first time the White House has shown such directed interest in the sea and the money, included in the U.S. Army Corps of Engineers’ civic works budget, is a modest step toward restoring it.

But this could prove a crucial drop in that bucket. The Corps is expected to use the money to advance a state plan that would create a series of shallow ponds at the south end of the sea, forming a protected wetland area for migrating birds and, perhaps more importantly, a testing ground for trying out different approaches to dealing with the contaminated soil and salinated water.

“If we don’t act quickly, we will have a public health emergency, an economic and social injustice, a wildlife crisis, as well as a missed opportunity,” Sen. Barbara Boxer (D-Calif.) said in a December speech while visiting the sea with then-Interior Secretary Ken Salazar.

Before 1905, the Salton Sea was nothing but a literal low point in California. A breached canal off the Colorado River that year spilled water into the basin and didn’t stop until 1907. Empty land straddling Riverside and Imperial counties became the Salton Sea, and officials chose to look at it as an opportunity. Congress decided in the late 1920s to use the basin as a repository for agricultural runoff, adding more liquid to the water body and essentially solving one problem while creating a lake-like recreational asset. Officials stocked the sea with fish in the 1950s to lure more people. Soon enough its shores were crammed with beachgoers and its waters were almost overcrowded with boats and fishermen. It was one of the most popular tourist sites in California, rivaling even Yosemite National Park.

But agricultural runoff and the already salty soil in the area combined to create heavily saline waters. The fishing began to decline as fewer and fewer species could survive the salty and increasingly contaminated waters. By the 1980s, those fish that could survive started to become subject to massive die-offs as warm weather and wind periodically churned the sea’s settled nutrients, causing oxygen-depleting algal blooms. The stench of hundreds of thousands of dead fish can be overpowering, even when traveling more than 100 miles as it did during an especially potent die-of last September. Yacht clubs and shoreside housing developments faltered and eventually failed. Seaside subdivisions are still carved out of the desert, their decaying asphalt streets a ghostly grid of neighborhoods that never quite were.

Keeping the Salton Sea fed with water is now less of a recreational conceit than a public health imperative. The sea’s mud contains unsafe levels of selenium and arsenic, as well as high concentrations of chromium, zinc, lead and pesticides like DDT. If this mud dries out and turns to dust, it poses significant air pollution and health risks. Many suspect the Salton Sea’s drying shores are behind unusually high rates of childhood asthma and respiratory diseases in the Coachella Valley to the north and the Imperial Valley to the south. These problems are only expected to get worse.

Under a set of agreements signed in 2003, the Imperial Valley has gradually been reducing the amount of water it pumps into the Salton Sea, instead selling it to urban customers in growing San Diego County. This and other water transfer agreements are causing the Salton Sea’s elevation to steadily drop, exposing more and more acreage of its contaminated soil.

The problem is compounded by the fact that the areas surrounding the Salton Sea are growing. Between 2005 and 2012, the cities of the Coachella Valley grew by 10.5 percent to more than 350,000. Imperial County’s population is expected to double over the next 50 years. And when you add in the 700,000-and-growing just across the border in Mexicali, there are a lot of people within a 50-mile range of the Salton Sea. Expand that radius out a bit, and there are also the thick urban populations of the San Diego and Los Angeles metropolitan areas in the potential fallout zone.

While it seems unwise to allow or enable further growth in the area, it may be this 21st-century urban boom — in thirsty neighboring regions and in the immediate surrounding area — that becomes the best impetus for finally doing something about the Salton Sea. While urban areas far beyond the sea are taking away its water, the growing populations nearby are bolstering the need to find and implement some solution to not only get more water into the sea, but also try to clean up the water and soil that’s already there. Urban growth nearby is exposing more people to environmental and health hazards, but it’s also raising the stakes for why something has to be done.

It’s somewhat impolite to consider the urban growth in the Coachella and Imperial valleys as leverage, but these people may be the most effective tool to ensure that the long brewing plans for restoring the Salton Sea don’t get lost in the same bureaucratic channels that doomed it the first time.