Sacramento Lifts Its Lamp Beside the Golden Doors – Next City

Sacramento Lifts Its Lamp Beside the Golden Doors 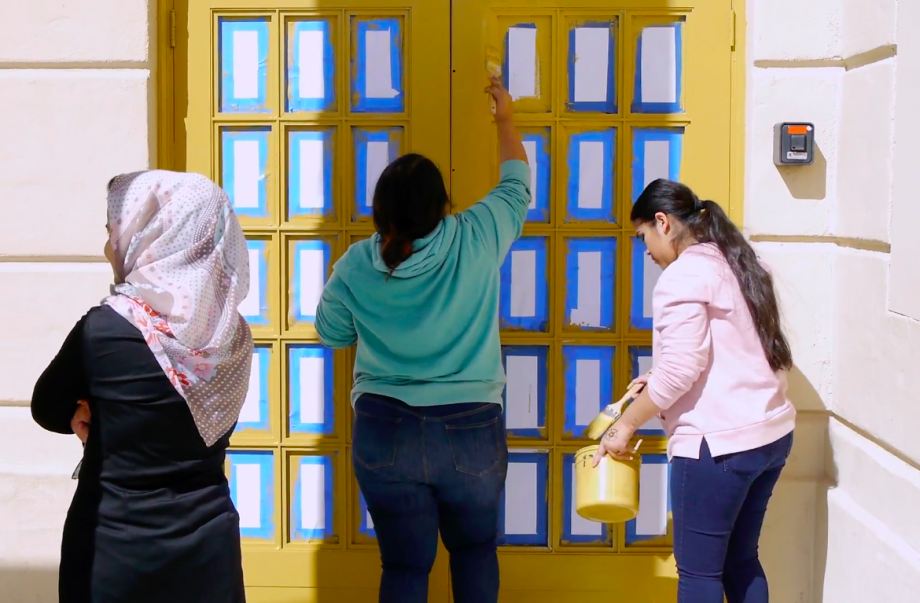 As part of the Golden Doors Project, students at Sacramento's C. K. McClatchy High School paint the school's entrance, to signify the space as a safe haven for immigrants.

“Give me your tired, your poor,
Your huddled masses yearning to breathe free,
The wretched refuse of your teeming shore.
Send these, the homeless, tempest-tost to me,
I lift my lamp beside the golden door!”

— From “The New Colossus,” by Emma Lazarus

When students at C.K. McClatchy High School returned from spring break on April 2, most of them came back to a surprise. With full support from the school district, some of their peers had painted the main doors of the school gold, as a symbol of solidarity with immigrants and a signal of commitment to defend immigrants from attack by supporting Sanctuary City policies, which limit local police cooperation with federal immigration authorities.

“It’s about opening the doors for people to know where there are safe havens, safe spaces for people to go for resources and to feel like they’re part of this community,” says Dreamer and seasoned human rights activist Irvis Orozco, who was at McClatchy to help paint the doors during the school’s spring break, and helped convince the local Telemundo affiliate to cover it. “We want to bring that message.”

McClatchy High School’s doors aren’t the only ones painted gold in Sacramento recently. These spontaneous paintings are part of the Golden Doors Project, a plan hatched by three locals during a drive from Los Angeles to Sacramento the night before Attorney General Jeff Sessions was scheduled to give a speech in Sacramento, in which he would blast California’s sanctuary laws and cities.

The three co-founders of the Golden Doors Project — Tre Borden, Connor Mickiewicz and Mat Cusick — all have creative and arts-based careers. On the drive back from L.A., the group heard from Kelly Rivas, chief of staff to Sacramento Mayor Darrell Steinberg. She urged them to devise a creative response to Sessions’ speech. They found inspiration from the other coast: Emma Lazarus’ poem, “The New Colossus,” immortalized on a bronze plaque mounted inside the base of the Statue of Liberty.

While the poem’s first two lines are most often quoted, it was the last line, and its hopeful tone, that landed just right for the crew.

“To put a Sacramento stamp on [resisting the Trump administration’s policies] … we were searching for some gestures to show allyship in a way that’s positive,” says Borden. “You can’t always stop the negative stuff from happening but you can create an environment that discourages dehumanizing people.”

During a rally at City Hall to protest the Sessions speech, Borden, Mickiewicz and Cusik ran into Daniel Zingale, senior vice president at the California Endowment. They shared their idea, and he arranged for the endowment to fund the Golden Doors Project.

After the rally, they quickly launched a website and reached out to their networks to see who might support them — including Orozco, whom they’ve known for years as one-time classmates at the University of California, Davis.

“We got some initial criticism [that] this isn’t going to save anyone,” Borden says. “The point is, this is not enough, but what it does do is give hope to people who are under threat, when they see people doing this who have no stake other than love of community.”

With that in mind, the crew thought about how to branch out beyond the expected places to bring new allies to the cause, or how to give existing allies a creative and somewhat lasting way to make alliance visible. They painted a dozen doors locally in the first few days, including a synagogue, an LGBT center, Evergreen Salon & Spa, Sol Collective, Mulvaney’s (the best restaurant in Sacramento, according to Borden) and even the doors of a few homeowners. Many of these appeared in the campaign’s launch video.

They’re up to approximately 75 doors, in Sacramento and elsewhere. Borden’s apartment is stacked full of boxes for the Golden Doors Ally kits — which, along with a can of gold spray paint, include the Golden Doors Pledges, a series of promises to be informed about the immigrant rights that Golden Door painters are committing to support.

The kits provide information about immigrants’ rights, and suggest ways for community members to get involved as allies. In addition, those who join the Golden Doors campaign are asked to stay informed about local or state sanctuary laws where applicable, to document and report immigration enforcement raids, to brush up on lawful search and seizure laws, to support immigrants on social media, and to offer in-person assistance to immigrants. Each kit links to resources helpful for meeting those expectations.

“If you’re starting the conversation, that’s a first step,” Orozco says. “This is about changing the cultural landscape of the country.”

Orozco sees a common thread running from something like the Golden Doors to other movements like Black Lives Matter, #MeToo, or the March for Our Lives. “These movements are ultimately interrelated,” he says. “They’re led by young people, they’re led by people affected the most by the issue.”

Jay Hansen sees the same thread, as a city of Sacramento school board member.

“McClatchy is the largest high school in the district, with 2,500 students, close to downtown, and most closely tied to the capital, with lots of kids of legislators and lobbyists all going there,” says Hansen. “When we recently had the gun violence walkout, over a thousand students at that school alone walked out.”

It was Hansen who invited Borden to give a presentation about the Golden Doors Project to a School Facilities Committee Meeting during spring break. The committee voted unanimously to give district schools permission to paint their doors gold, and permission to teachers to paint their classroom doors gold (or cover them in gold foil). Two days later, Hansen was out there painting the doors with around 15 McClatchy students (most of whom were also Dreamers, he says), Orozco and the Golden Doors Project founders.

“It was a great a visual combination of art and support for immigrants, old and new,” says Hansen. “We have a lot of teachers who are Dreamers in California, and obviously lots of students, so it’s something that resonates. I’m only second generation myself, my grandfather was born in Norway. I’m lucky I’m in this spot on the school board to direct policy for our school district.”

There are 81 schools in the Sacramento school district. Borden expects about half will participate.

“Dreamers are scared as hell that the government has their information,” Orozco says. “The Golden Doors signify a safe space.”