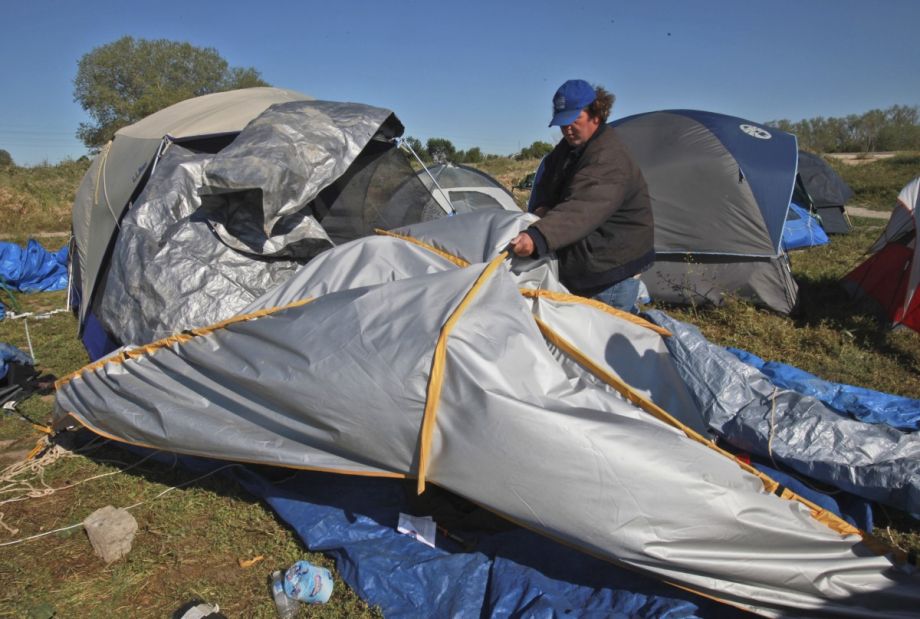 A man prepares to move from a Sacramento homeless encampment in 2009. (AP Photo/Rich Pedroncelli)

Their plan will give people who are homeless “preference on the first 600 vouchers for affordable housing in Sacramento,” according to the news source, as well as preference on “the first 200 units of public housing in the city of Sacramento.”

That preferential status will mean that people already on affordable housing wait lists — including the elderly, veterans and those who spend more than 50 percent of their income on housing — get bumped farther down. Thousands of people are already in line, CBS reports.

“There are times when you’re making tough choices to serve the most vulnerable and it may not be fair or feel fair,” Sacramento Housing Alliance’s Cathy Creswell said, according to CBS.

The number of homeless deaths in Sacramento has risen sharply over 14 years, as Josh Cohen reported for Next City last month. In December, the Sacramento Regional Coalition to End Homelessness released its annual Homeless Deaths Report, which found that the number of homeless people who died in 2015, 78, was more than half that same number from 2002, 32.

That increase doesn’t necessarily mean that things are getting worse for Sacramento’s homeless population, and could just reflect the rising number of homeless people in the region. Regardless, Bob Erlenbusch, the Coalition’s executive director, said there aren’t nearly enough shelters and services to address their needs — around 36 percent sleep outside.

“That’s about 1,000 people out on the street every night exposed to the elements, the risk of violence, citations for camping,” he said in January for the Next City article.