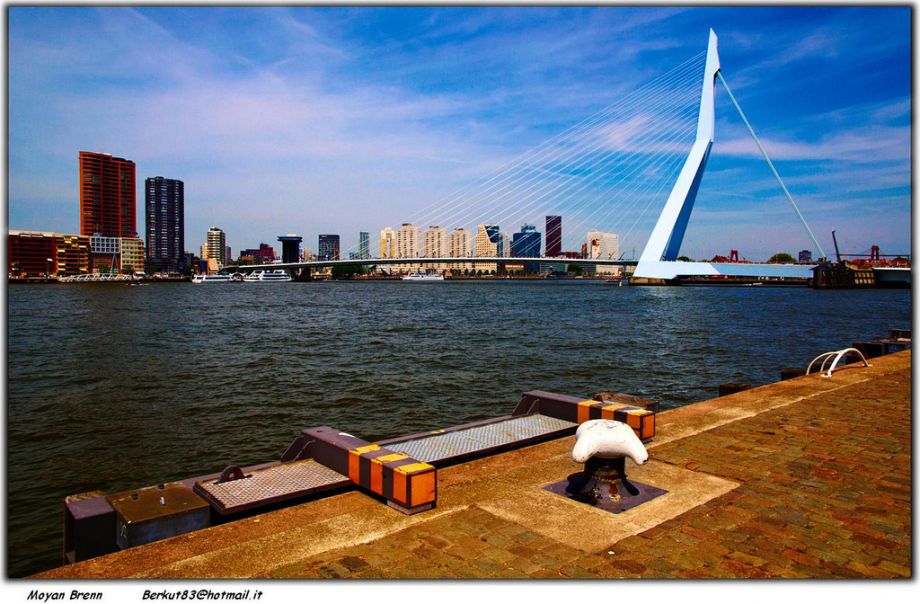 There is so much knowledge about climate change in Rotterdam that experts have begun focusing on ways to spread it to other cities. Photo credit: Moyan Brenn via Flickr

Rotterdam is widely considered a world leader in climate change resiliency. This reputation stems from centuries of successfully managing temperamental waters and finding a balance between heavy port industries and a bustling urban environment. It’s only recently, however, that Rotterdam has begun to focus on sharing that information with the rest of world. For many delta cities, finding the knowledge resources necessary to protect its citizens and ensure a sustainable future can be a more difficult task than securing the funds to implement these changes. By actively pursuing communication with other vulnerable cities, Rotterdam hopes to engage in a global conversation about climate change and compound the existing knowledge on best practices, successful policy strategies and financing adaptation.

As a member of the C40 Cities Climate Leadership Group, Rotterdam is well placed to exchange ideas with other proactive cities. The C40 is a global organization of 59 cities committed to reducing greenhouse gas emissions and climate risks. Based on the premise of mutual benefit, C40 provides a platform for direct peer-to-peer exchange and research. Under this large umbrella, Connecting Delta Cities is a smaller network of cities within C40’s Water & Adaptation Initiative.

The Connecting Delta Cities network was founded in Rotterdam in 2008 and now includes partner cities around the world. Rotterdam is currently pursuing direct collaborations with five of these members: Jakarta, Tokyo, New York, New Orleans and Ho Chi Minh City. In these cities, Dutch experts and politicians have teamed up with local consultants, advisors and knowledge institutions to implement change at urban and regional scales. Most recently, a Climate Adaptation Partnership between Rotterdam and Ho Chi Minh City has garnered international attention. In a recent article for The Guardian, Beth Gardiner writes: “After months spent researching the scope of Ho Chi Minh City’s challenges, the two cities signed a memorandum in 2011 appointing a consortium of public and private sector experts to begin work on the plan. Their efforts culminated in the delivery of a major adaptation strategy last year, laying out six broad goals such as increasing water storage and drainage capacity, and making sure flood risk informs development decisions. The Vietnamese then signed Rotterdam on for Phase 2 of the effort (now just beginning), in which the Dutch will help local planners apply the ideas more concretely.”

In addition to these direct exchanges, through the Connecting Delta Cities network Rotterdam experts have also contributed to a series of books for the general public. The first book detailed the challenges facing delta cities, while the second introduced several best practice examples. The third volume, Resilient Cities and Climate Adaptation Strategies was published in early 2014 and explores innovative, practical examples from the 13 members of the Connecting Delta Cities network. Free to download as an e-book, Resilient Cities and Climate Adaptation Strategies was initiated by Jeroen Aerts (VU University, Amsterdam), Piet Dircke (ARCADIS consultancy and engineering) and Arnoud Molenaar (City of Rotterdam). By highlighting these successful strategies, the book provides a valuable resource for policy-makers and specialists around the world.

In addition to exchanging information through government-to-government dialogues and free publications, in 2010, Rotterdam hosted the first ever “Deltas in Times of Climate Change,” an international conference that focused solely on challenges and opportunities specific to delta regions. Attended by almost 1,200 participants, the conference brought to light a number of urgent agendas, including the need for an integrated approach to climate change adaptation and the observation that more focus should be put on application rather than techniques.

Later this year, from September 24 – 26, the city will host a follow-up conference: “Deltas in Time of Climate Change II.” Jointly organized by the City of Rotterdam, the Dutch research program Knowledge for Climate, the Dutch Ministry of Infrastructure and Environment and the Dutch Ministry of Foreign Affairs, the conference theme is “Opportunities for people, science, cities and business.”

Taking its cues from the conclusions drawn at the previous conference, “Deltas in Time of Climate Change II” is divided into three conceptual approaches with complimentary roundtable discussions. “Deltas in depth” focuses on recent scientific findings related to delta management and discusses their practical relevance. There are eleven sessions, ranging from “Rural development and food security” to “Decision support tools and risk assessment.” “Deltas in Practice” is concerned with policy-making and on-the-ground experiences. This part of the conference offers eight sessions, including topics like “Awareness, capacity building and community resilience,” as well as “Governance and finance.” During the “Delta Sessions,” participants will discuss the challenges and opportunities specific to a number of delta regions around the world. These range from highly developed areas like the Mediterranean to emerging economies like Bangladesh, Mozambique and Myanmar. Many of these areas are also the Dutch government’s partners from Water International, and thus of political importance at the national scale.

According to Florrie de Pater, manager of Knowledge for Climate and chair of the conference organizing committee, there has been a global shift since the last conference. “In 2010, I led a roundtable discussion on financing adaptation strategies and almost no one came. This year, it’s one of our main priorities. Everyone has suddenly become interested in how to finance these plans. The EU is requiring all European countries to have a Climate Adaptation Strategy in place before 2017. Now they have to figure out how to pay for it.”

The conference gives specialists from around the world the opportunity exchange ideas and reflects on current practices and brings together the business, science and governmental communities. For de Pater and the other conference organizers, this interaction between research and society is key to establishing long-term change. That goal was the spark for the first conference in 2010, and continues to drive the special relationship between the City of Rotterdam and research institutes like Knowledge for Climate.

One of Rotterdam’s great strengths is its ability to communicate this expertise to a global audience. Not only by sharing information directly with other governments, but also through free publications and international conferences organized with the intention of bringing together cutting-edge science and policy-makers. For Rotterdam, having the information means very little without the ability to share it. By communicating its successes as well as continuing challenges, this city is insuring its future as one of the world’s safest delta cities. No one can say for sure what challenges delta cities will face in the future, and as Rotterdam alderwoman Alexandra van Huffelen pointed out to The Guardian in reference to Rotterdam’s collaboration with Vietnam, there is still much to be learned from traditional approaches. “They [the Vietnamese] come from a more natural way of protecting themselves; we come from a more infrastructural way. We’re meeting each other halfway. They’re learning from us about storm surge barriers and dikes and things like that, and we’re learning from them [that] you need to work with nature, and let nature help you protect the coastline.”