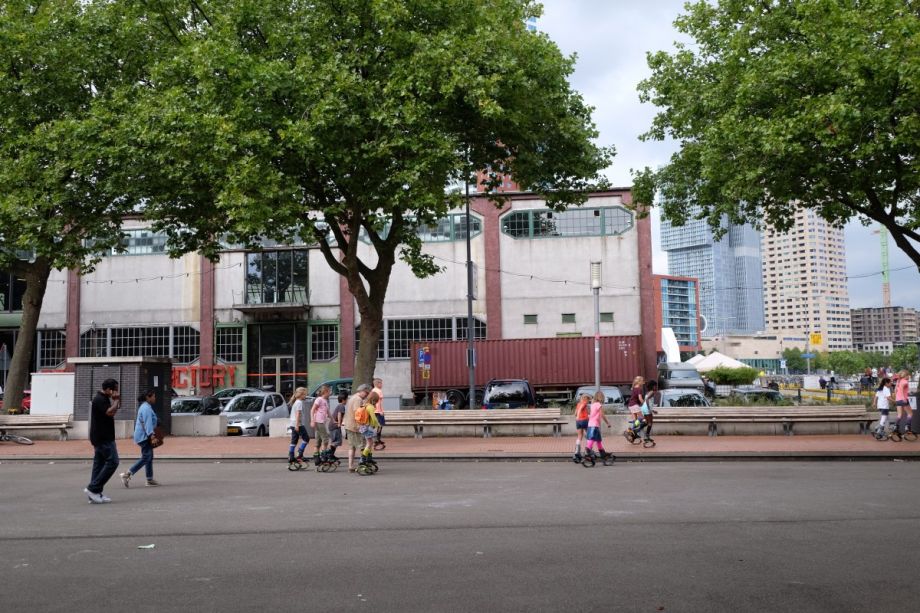 Vogue’s naming of Rotterdam as Europe’s “new capital of cool” in February is just the latest chapter in the Dutch city’s tale of growing popularity. But lifestyle lists don’t take into account how fancy furniture shops, destination restaurants and trendy hotels can complicate planning in a city with a longtime labor image.

The contrast is especially visible in Katendrecht, a neighborhood once known for its social housing for harbor workers. There’s still a preponderance of subsidized housing, but Katendrecht’s image is becoming decidedly hip. Deliplein, a public square that used to be thought of as a red light district, now sits adjacent to a craft brewery, and the city has lifted a 9 p.m. curfew previously imposed on children as young as 9 due to gang activity.

Katendrecht sits on a peninsula, surrounded by water on three sides, with the wealthy Kop van Zuid neighborhood to its north. Much of Katendrecht’s recent transformation can be attributed to a new footbridge connecting it to its rich neighbor, an area the city of Rotterdam has carefully shepherded into an attractive home for big business and high-income residents. With its tall buildings, Kop van Zuid resembles a miniature Manhattan overlooking a miniature Brooklyn.

But the comparisons to New York City end there. Rotterdam is still the poorest major city in the Netherlands, and while it has seen a surge in popularity, it’s still trying to lure investors and create jobs.

That’s part of the reason why the city is planning to demolish 20,000 dwellings currently affordable to poor residents and replace them with 36,000 houses aimed at those with middle and high incomes.

City officials say they hope this will help to create a stronger economy with a healthier mix of incomes, but others see it as a thinly veiled attempt to push poor people out.

As part of a larger strategy that tackles education reform, transportation, clean energy and, of course, jobs, Rotterdam’s planning department looked at the current housing stock and determined that it had a surplus of social housing, says Mattijs van Ruijven, head of planning.

The city’s official plan, Woonvisie Rotterdam 2030, targets 10,000 public properties and 10,000 private properties for demolition over the next 15 years. Rotterdam will in turn build 5,000 new social housing units elsewhere in the city. Those currently living in government-owned properties destined to be torn down will go to the top of the waiting list for a new unit. The 10,000 privately owned properties are houses with below-market value that the city will purchase. While owners will get the purchase price, anyone renting an apartment in a private property that’s on the demo list will also be offered 6,000 euros or another place to live. If renters have trouble relocating on that money, the city will work with the social housing association to help.

Van Ruijven says he is confident that everyone displaced by this project will have a new place to live before their house is demolished.

While destroying 20,000 affordable homes may seem startling to many across the world, Emile Klep, director of urban planning with the city of Rotterdam, says he is concerned about middle-income families. The national rules on qualifying for social housing units — most are reserved for households making less than 35,000 Euros per year — leave a large portion of middle-income families just above the cut-off without affordable rental options, says Klep.

“If those families could not live in this traditionally labor-class city, then we would really have a problem,” he says.

Querien Velter, a city councilor with the Socialist Party, says there is no such thing as a social housing surplus in Rotterdam. Indeed, there’s a waiting list, and the number of rent-burdened people in the city was found to be 17 percent in 2014. This shows that many people still need cheaper rents, she says.

Velter helped to organize a referendum in 2015 to challenge the city’s housing vision. Over 70 percent voted against it, but voter turnout overall for the referendum failed to meet the city’s required 30 percent, so it was considered null.

While Klep sees the low voter turnout as proof that Rotterdam residents aren’t concerned about the city’s plans, Velter sees it as a failure of the government to ask the right question. Instead of asking if people were in favor of demolishing 20,000 houses, the referendum asked if they were “in favor or against Rotterdam’s housing vision.”

Rotterdam’s newfound popularity isn’t necessarily a bad thing, says Brian Doucet, a senior lecturer at Erasmus University College in Rotterdam. “But it shouldn’t come at the expense of demolishing social housing and replacing it with more expensive housing for other people,” he says.

There is plenty of space in Rotterdam to build upward or use former harbor and industrial locations, he says. “It’s not as if the city is completely full.”

But the point isn’t to densify the city, it’s to make it more attractive. Michiel Koorenhof, communications manager with the city of Rotterdam, says it is simply replacing “obsolete housing blocks with … new and larger dwellings of higher quality.”

People in social housing can stay in the neighborhoods once they “get a job, earn a better income and start a family,” says Koorenhof. It also contributes to a more diverse neighborhood, he says.

Breaking up concentrations of poverty is a common feature of the Dutch social housing strategy and is generally considered beneficial. It is one of the main reasons the city of Rotterdam uses to back up its housing vision.

While Doucet agrees that the model has its benefits, he also sees Woonvisie Rotterdam 2030 as an active gentrification strategy on the part of the government. As the core of the city expands and becomes richer, poor people will be priced out of the downtown areas, says Doucet. “Not everyone is invited to benefit from the city’s success,” he says.

Doucet and Velter also see a racial element they both find troubling. Leefbaar Rotterdam (“livable Rotterdam,” in English), a local right-wing political party, created a video last year in favor of the housing strategy, showing a crumbling neighborhood with a mosque in the background and satellite dishes protruding from every balcony. The final scene shows an end result of families with one child, couples, and single people waving happily in front of their new, satellite dish-free homes.

“All this talk about families moving back into the city is very selective,” says Doucet. “It’s not talking about more space for larger families from non-Western backgrounds or working-class families living in social housing.”

He thinks the city’s attempt to appeal to the middle class comes at the expense of other residents.

Klep says the city’s housing strategy is consistent with its commitment to inclusivity, but acknowledges the disconnect between the city’s working-class roots and its new image as a destination for high-income people.

“We spent the last 20 years hearing … terrible things about our city, and now in the last two years, we can join the other cities on the playground,” says Klep.

In terms of telegraphing that Rotterdam is for everyone, Klep says, “We have to work on that narrative.” When asked what exactly he thinks the city will do to change that “narrative,” he could not offer specifics.

In the meantime, Velter and fellow housing advocates are focused on keeping the issue of affordable housing at the top of the political agenda going into next year’s local elections.

“With a different city council there is hope that a better housing vision will be formulated,” she says.

If that fails, she says there will be a protest at every demolition in Rotterdam between now and 2030.

Ashley Renders is a freelance journalist who covers under-reported stories around the world. She also keeps a close eye on oil, gas and mining companies.