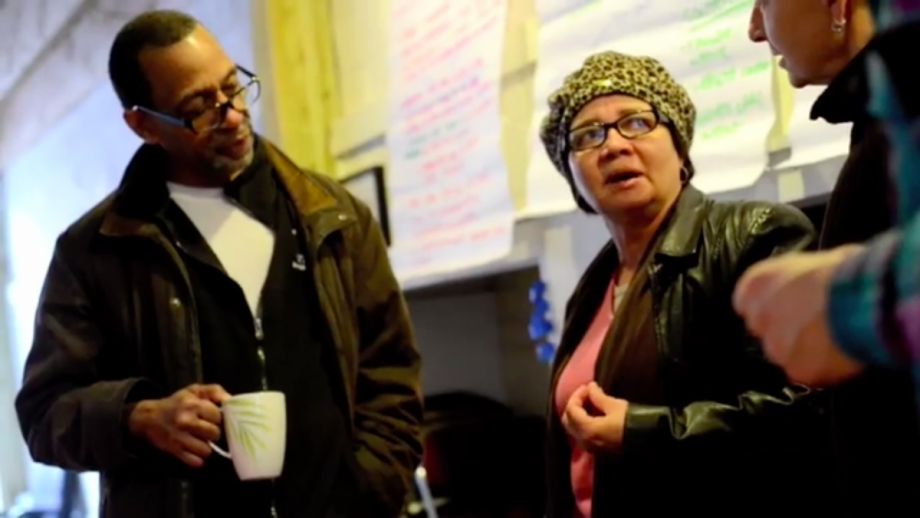 Survivors of solitary confinement taught Aaron Tanaka about the importance of political movements and organizing.

Tanaka was born and raised in the Bay Area. He still vividly remembers going from a predominantly white elementary school to middle school in Richmond, a racially diverse, working-class city north of Berkeley. It was the first time he had to walk through metal detectors into school, his first real exposure to a criminal justice system that has disproportionately targeted people of color in the U.S.

“My classmates were seen not really as investments, but more as threats,” Tanaka recalls.

Tanaka says he was the only kid from his grade who went to Boston for college; he attended Harvard. Freshman year, he tutored at a juvenile detention center. Something about the experience left him unsatisfied. He later interned with the American Friends Service Committee (AFSC), which advocates for prison reform, including an end to solitary confinement. There, he worked with Jamie Bisonnette Lewey and Kazi Toure, the latter of whom spent seven years in prison, four of them in solitary.

“Being at AFSC I began to understand how solitary confinement is essential in preventing prisoner organizing, and as a result acts as an essential linchpin in maintaining the broader criminal justice infrastructure,” Tanaka says. “I went from approaching economic and criminal justice inequality, from a service position, towards eventually thinking about it more structurally, from a political community organizing standpoint.”

Tanaka’s vision, as the founder of the new Center for Economic Democracy (CED): to build a model for supporting businesses rooted in community-based social justice movements of low-income people, especially people of color.

“I felt that there was a huge values alignment between progressive investors and the cooperative business sector with the grassroots organizing and movement-building sector, but the language and the theory of change were very different and these groups were fairly siloed,” says Tanaka.

Tanaka, who was recently named to the 2016 class of Echoing Green Fellows, has previously experienced the frustration of such silos, and what it’s like to break them down.

After graduating from Harvard in 2004, he went on to co-found the Boston Workers Alliance (BWA), a network of low-income people and people of color that was instrumental in getting Massachusetts to become the second state to “ban the box” in 2010, removing barriers to employment for people with a criminal record. Most employers still found ways to discriminate against many citizens returning from prison, however, so BWA eventually created its own temp agency to get some experience for workers and maybe convince some of their temporary employers that they were reliable enough to hire permanently. That proved not to be enough either.

Then, waiting in the airport on the way back to Boston from a conference in Memphis on race and environmental justice, Tanaka recalls he and several BWA members and organizers decided to start a worker-owned business. They went back to Boston, got started, made a lot of mistakes along the way (including a veggie oil truck spill), connected with a Latino workers’ group (BWA members are primarily black), and eventually formed CERO, a commercial composting company. Since its founding in 2012, CERO (which stands for Cooperative Energy, Recycling, and Organics) has diverted 1.3 million pounds of food waste from landfills, saving clients $84,425 in trash hauling fees and counting.

But, more importantly, Tanaka says, CERO is a business rooted in the two worker groups’ movements and their shared vision for the future. Those roots include CERO’s investors. Faced with few other options as a worker-owned business, CERO worked with financing advisory firm Cutting Edge Capital to issue a direct public offering (DPO), raising $340,000 in startup capital from their community and those they had worked with as a political movement.

“We were able to activate a network of people who don’t always think of themselves as investors or aren’t really in the sort of economic development space,” Tanaka says. “But because it was a grassroots effort that had won policy victories in the past, we had a level of credibility that they were able to lean on.”

The experience of CERO has shaped Tanaka’s vision for CED. But instead of trying to build just one more business rooted in a social justice movement, CED aims to equip a community with the tools to create as many movement-rooted businesses as it needs.

“What we’ve been doing over the last almost year is driving a community-based feasibility study to help launch what we’re calling the Ujima ecosystem,” says Tanaka. Ujima, one of the seven Kwanzaa principles, means collective work and responsibility.

CED hopes this Boston Ujima Project can become a model for others to adapt. It’s a search for a democratic third way between top-down state economic planning and purely capitalist, laissez-faire economics.

“The question became how do we start allowing communities to experience democratic planning at a local level, in a way that not only starts to build our democratic muscle memory, but is also directly benefiting communities from a position of job creation, ecological benefit, wealth development,” Tanaka says.

Their first step is incubating a democratically governed organization that is going to be rooted in or anchored by working-class people and low-income people who are already part of grassroots organizations and labor unions in the Boston neighborhoods of Roxbury, Dorchester, Jamaica Plain and Mattapan.

“We want to connect with folks who already … see themselves as activists,” Tanaka explains. “We’re also layering other types of members and including small businesses and cooperatives, nonprofit organizations and grassroots groups, funders and investors, and technical assistance providers, and that creates our core membership.”

The first task of the organization will be to build a democratic investment fund that will pool capital from individuals, including from the community, using tools like DPOs or online crowdfunding, along with capital from interested impact investors and institutional investors. They’re also exploring how to work with a local bank to create a certificate of deposit (CD) program in which the deposited savings would get pooled into the fund.

The CD program would be a tweak on a model from Equal Exchange, the worker-owned fair-trade company, which has such an arrangement with Boston-based Eastern Bank. “We’re kinda asking the question of could we create a similar product but instead of servicing one business, that actually could be a credit line that services a broader network of pre-qualified businesses from the neighborhoods,” Tanaka explains.

Tentatively titled the Ujima Community Capital Fund, the group plans to have investment decisions flow through a participatory budgeting process.

“Basically we said, well nobody is using participatory budgeting to think about how to do investment in our communities, but in fact that’s a major need, because we have a situation like many other places where you have many liquor stores and not enough grocery stores,” Tanaka says. “The process of democratizing the investment all of a sudden allows for folks who have very little control over where finances swing in their neighborhoods to now become agents in actually defining that.”

At every step of the way, CED will work with partners that have experience with the different parts of the ecosystem, like Cutting Edge Capital or the Participatory Budgeting Project. “Most of the things we’re trying to do, somebody has already done successfully,” Tanaka says. “Our role is to layer these or to structure these within a democratic infrastructure and then weave them together so that they’re mutually reinforcing.”

Tanaka anticipates the Boston Ujima Project will launch in earnest this fall.