Queens Community Designs Its Own Post-Hurricane Sandy Future – Next City 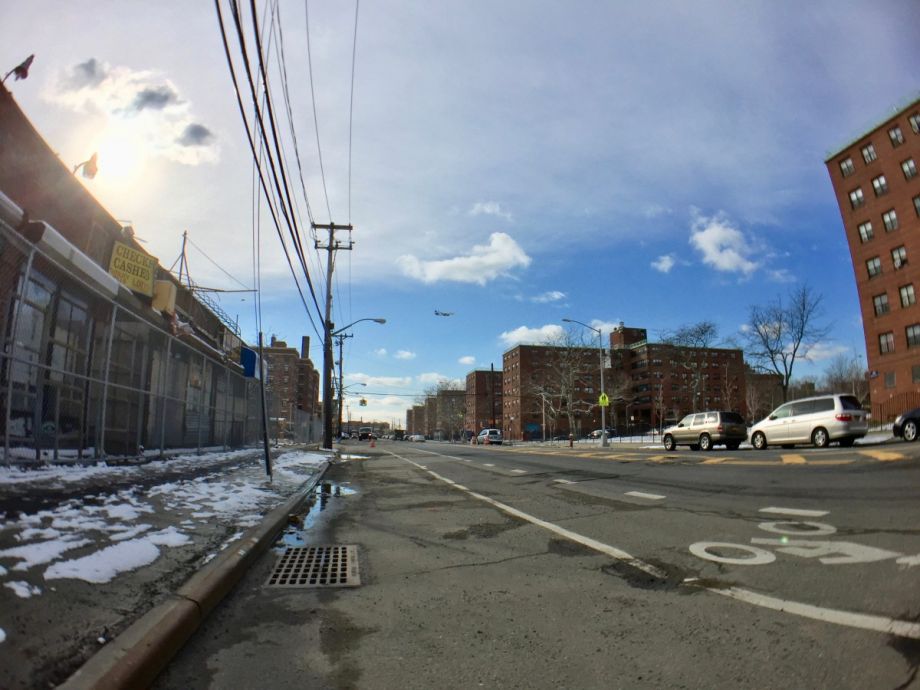 A neglected corner of the Rockaways, left, is currently slated for a new retail and community space development. (Photo by Oscar Perry Abello)

Located on a long, narrow peninsula between the Atlantic Ocean and Jamaica Bay, about an hour’s subway ride from Midtown Manhattan, the remoteness of New York’s Rockaways is part of its growing appeal to local staycationers, as well as a reason why its residents have had to survive decades of neglect.

“When she came out here that was one of the things that brought me out here,” McMickle says, explaining that her sister’s kids liked the schools, so she thought her kids would too. Two generations of her family have since grown up in the Rockaways. Her granddaughter is in the Air Force.

There’s one particularly neglected corner, right across the street from Ocean Bay Apartments, the 1,800-unit, 4,800-person public housing community where McMickle lives. A liquor store and a check cashing place are among the boarded up storefronts on the site. A fire damaged part of the site in 2014. The New York City Housing Authority (NYCHA) currently owns the land.

“I call it ‘the hang out’ for Rockaways. We would really like to see that fixed up. It’s really bad,” she says. “I know that a supermarket there would make life much easier for people. If we had a gym above the supermarket that would be nice. You’d see me up there.”

That supermarket has become a real possibility thanks to a partnership born out of Hurricane Sandy.

“It was almost a miracle, right at the time we were going through a long-term visioning process with the community, NYCHA put out an RFP for the site,” says Patricia Simon, executive director of Ocean Bay Community Development Corporation. NYCHA’s RFP had one big request: a grocery store, given the area’s status as a food desert. “The visioning process final report proposes a grocery store for the site.”

The visioning process and the proposal they submitted (which NYCHA ultimately chose to move forward this year) are part of an ongoing partnership between Ocean Bay CDC, Asian Americans for Equality (AAFE) and LISC NYC.

Also during the recovery, an informal group of homeowners, businesses, NYCHA residents (including McMickle) and other renters began to meet monthly. Even after attracting some attention and resources to their post-Sandy plight, they decided to keep meeting, and more frequently. They continue to meet every other week, still at the same place, Battalion Pentecostal Assembly Church. They call themselves Rockaway Call to Action, and continue to work closely with Ocean Bay CDC on a variety of issues. This year’s big focus is voter registration and civic engagement.

Rockaway Call to Action provided the perfect venue for the long-term visioning process. The final report covered a wide range of issues and properties all over the neighborhood, many of them vacant lots. LISC NYC also recruited Hester Street Collaborative, another NYC-based nonprofit, to facilitate the community visioning work.

“In NYC you have this rich ecosystem of different types of organizations that all bring different strengths to the table,” says Eva Alligood, deputy director at LISC NYC.

The vision for the neglected site across from Ocean Bay Apartments includes the grocery store, some kind of shared commercial space (as a platform for many of the home-based businesses operating in NYCHA housing), a new headquarters for Ocean Bay CDC that includes more training space for their various programs including workforce development (nearly 500 participants last year), and a space for a financial service provider.

LISC NYC also approved a low-interest $175,000 predevelopment loan to AAFE for predevelopment costs of the site. All three organizations will be working this year to shepherd the proposal through NYCHA’s final approval process to transfer ownership of the site to Ocean Bay CDC and AAFE (hopefully by December). LISC NYC will also support Ocean Bay CDC and AAFE to apply for federal new markets tax credit financing to seal the deal.

The proposed project, slated to be at least $10 million in acquisition and construction costs, will include 21,000 square feet of indoor space, as well as an outdoor plaza and seating area. It will be Ocean Bay CDC’s first real estate development project in its 15-plus-year history, and for that, AAFE’s decades of real estate development experience is essential. AAFE’s first affordable housing development project was in 1986, and they’ve since gained tremendous experience with mixed-use and commercial development.

“We’re the new kid on the block, so to have AAFE in there really solidified the proposal,” says Simon.

“Before we became a developer in our own right, we were a lot like Ocean Bay CDC, providing social services programs but without significant real estate assets or experience,” says Thomas Yu, AAFE’s point person for the Ocean Bay CDC partnership. “We originally had other partners who helped us get off the ground in real estate, so we’ve always remembered that and always thought we should do the same for other emerging nonprofits around the city.”

Ocean Bay CDC hopes to continue partnering with AAFE in the coming years as it begins to flesh out the rest of the community’s long-term vision for economic development and revitalization.

The relationship goes even deeper than real estate development. The financial services provider in the future site will be a joint operation between AAFE and Ocean Bay CDC. AAFE already operates two community development financial institutions on its own. If AAFE lives up to its own vision for mentoring other organizations, the joint financial services provider may eventually become a credit union owned and operated solely by Ocean Bay CDC.

“Going in, we never wanted to supplant what they’re doing,” says Yu. “They’re the people on the ground, it’s really about providing them technical assistance so they can really flourish.”