Cleveland Police Aren’t Stowing Their Bikes After the RNC 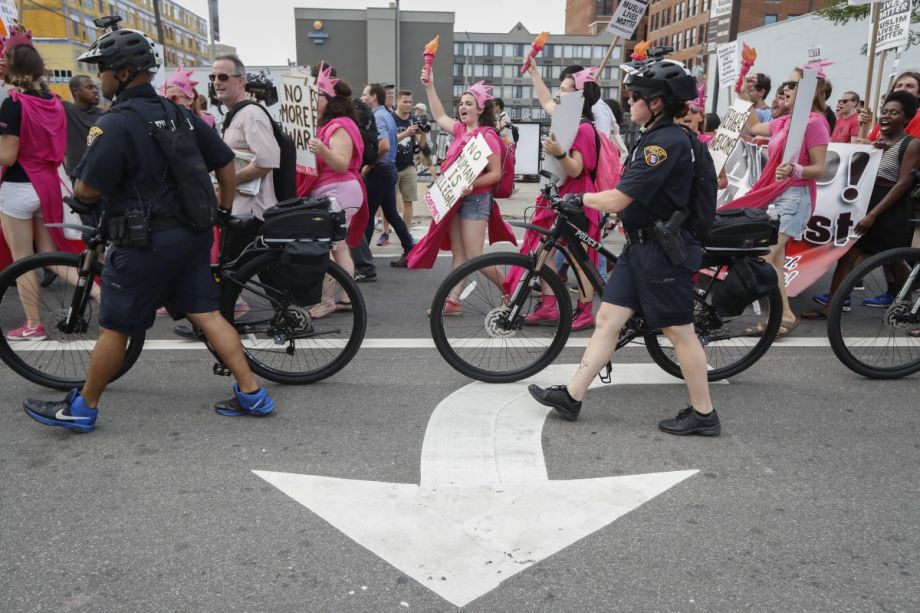 Demonstrators march past police during the Shut Down Trump & the RNC protest before the convention kicked off in Cleveland. (AP Photo/John Minchillo)

The Republican National Convention’s legacy in Cleveland is shaping up to be something Donald Trump never would have signed off on: more bikes on city streets.

The Republican candidate for president has said publicly that he would “never be in a bicycle race” and that he gave up on getting around on two (non-motorized) wheels when he was 8 or 9 years old. But while Trump — a collector of luxury cars — sees little value in bicycles, Cleveland officials have apparently come to a very different conclusion in the wake of the RNC. According to Cleveland Police Captain Thomas Mandzak, the city’s experience hosting the convention is leading the police department to increase the number of patrols done on bike.

“We also are seeing that the public responds differently to police officers on bikes instead of patrols cars in their neighborhoods,” Mandzak says. “Being on a bicycle makes you much more approachable, and citizens will ask questions and have no problems walking up to you. The police officers are seemingly less of a threat, and the interaction with the public is much more personable.”

As part of the preparation for the RNC, Cleveland used about $660,000 in federal funds earmarked for security to purchase 300 bicycles. Those bikes were seemingly everywhere during the event, often linking up in groups of 30 to 40 officers that provided crowd management in ways that mounted police on horseback or officers in patrols cars or on foot couldn’t. At times, police used bikes as buffering devices to create dividing lines between antagonistic protest groups without involving riot gear. In general, the cycling cops moved more easily and less disruptively through crowds.

The department decided to implement bike patrols during the RNC after observing the way other city police forces patrolled neighborhoods.

“In our preparation for the convention, when we went to observe other departments in Seattle and Charlotte and found that these police departments using more bike patrols give officers an advantage you don’t get with officers patrolling in cars,” says Mandzak, who oversaw Cleveland’s convention patrols and will help implement increased use of bicycles in neighborhood patrols.

Over the next few months, they will be piloting the new bike patrol routes in certain neighborhoods and experimenting with groups of two to four officers working together on bikes in teams.

The move is one small part of a much larger U.S. Department of Justice-mandated reform program that has community policing at its center.

After the 2014 deadly police shooting of 12-year-old Tamir Rice, who was playing with a toy gun in a park, the DOJ released a report finding that Cleveland had a host of systemic problems with its police force, including a tendency toward excessive force, insufficient accountability, inadequate training, ineffective policies and a lack of engagement with neighborhoods.

No one expects more cops on bikes to solve all of the many challenges the department faces, but community organizers see it as a good starting point. “Bike units riding through the neighborhoods, and the familiarity that the neighborhood residents get with the officers, can be a good thing and a part of the larger puzzle,” says Rhonda Y. Williams, a professor of history at Case Western Reserve University in Cleveland, and founder of the school’s Social Justice Institute.

Williams also co-chairs the Cleveland Community Police Commission, which has been appointed to monitor the city’s efforts to comply with the federal consent decree initiated by the DOJ in response to the report’s findings. “How the police department acted during the RNC could be a signal on how they might act in the future,” Williams says. “The word we have gotten on how [the Cleveland Police Department] performed was that they were very professional and friendly and deescalated violence instead of adding to it.”

“But we have to realize that police on bicycles is a tool that can be used well or poorly,” she says. “Not having a big metal shield around you that the police car provides does make the police officers more open and engaging with the community, and does implement a very different dynamic. But at the end of the day, police have to listen to the community and realize protecting people as well as property is part of that dynamic.”

Mandzak agrees wholeheartedly with those assertions, and he says that more police officers on bikes can be an important part of a total package of police reforms. He also says that the rank-and-file officers are eager to shed their cars and move on to bikes.

“When we first started out, some officers were wary of getting out of their patrol cars,” he says. “But we now have officers lined up to be part of these bike patrols. They like the fact that they can be out of the car and get good exercise. But they also realize that being on a bicycle can be a big improvement from both tactical and community engagement perspectives.”