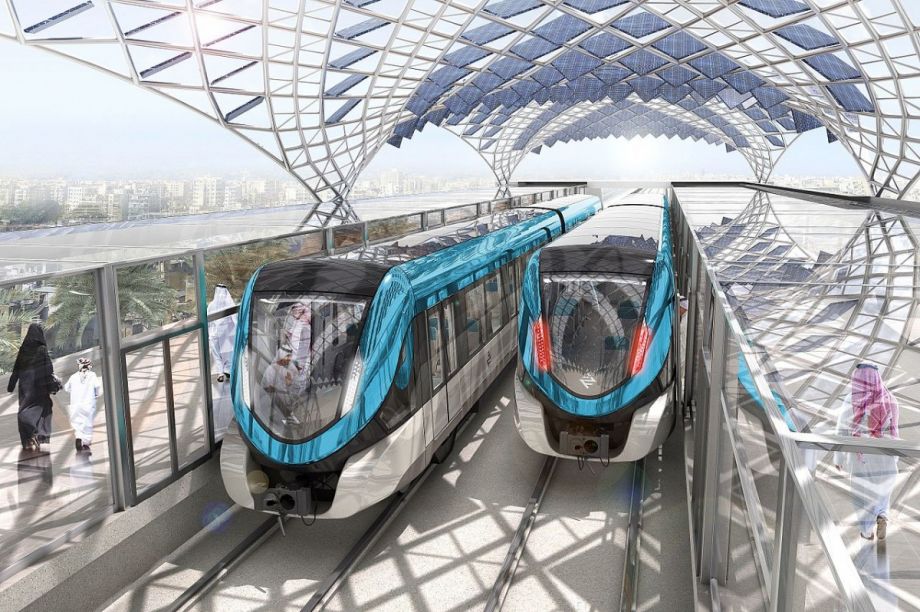 Riyadh Goes from Zero Transit to a Full-Blown System

One of the largest cities in the world without a mass transit system is one year away from opening the world’s largest driverless metro system, six years after breaking ground.

The Saudi Arabian capital of Riyadh is home to 6.9 million residents, a figure that is growing at a pace of 3.5 percent a year, faster than the world population growth average of 2.5 percent a year. And as of now, just about none of them can navigate the city without a car. Taxis are the only form of public transportation available, and most city streets lack sidewalks or other safe places to walk. As a result, 80 percent of the 10 million trips Riyadh residents take each day are made by car, while only 2 percent of the people use public transport.

By this time next year, that should change dramatically as the final elements of the ambitious six-year project to build a comprehensive bus and rail transit system for Riyadh fall into place.

An in-depth report in the International Railway Journal describes how the Riyadh Development Authority (RDA) is delivering a six-line metro system plus bus rapid transit lines all at once. The work is being completed on time and within budget, according to the RDA.

The six-line metro construction project is the largest single rail transit construction project outside China. The fully automated metro system will have 85 stations and 176 km (109.4 miles) of routes. The system is projected to carry 1.4 million passengers per day at the outset. The first three lines to open will begin revenue service in mid-2020, while the other three will open by the end of the year.

Ahead of these transit improvements comes a network of 80 bus routes scheduled to open by the end of this year. Two of the routes will be bus rapid transit lines that operate north-south through the city; the rest will be either community bus routes or feeders to the BRT lines. In total, the bus system will have 1,900 km (1,180.6 miles) of routes and some 8,000 bus stops.

The mobility of Saudi women has been severely restricted, by both a ban on women driving and a lack of transportation options. The kingdom lifted the driving ban in the summer of 2018. (In June, the New York Times outlined how that change fits into an ongoing fight for women’s independence.) The arrival of the metro and bus systems could further the ability for some women to travel without male accompaniment. Riyadh metro trains will have three classes of cars: first, family and single. Unaccompanied women will be able to travel in the family-class cars.

International Railway Journal describes the challenges the RDA faced in planning and building the system, such as dealing with car traffic while building six metro lines above and beneath city streets all at once, and how planners and the three consortia building the metro and bus lines addressed community and environmental concerns.

And even though the metro has yet to open, Riyadh officials are making plans for its expansion. “We are already getting requests to extend the network to other parts of the city, and we are studying a three-phase expansion program,” Alwalid Alekrish, the RDA’s deputy CEO for programs and projects, told IRJ. “The first phase will probably add around 50 km [31.1 miles] of extensions to the existing network and possibly a new line as well. We could move to phase one very soon.”

The Philadelphia street and transit maps that the Southeastern Pennsylvania Transportation Authority produced before everyone got smartphones used to contain this undisputable statement: “If you want to move quickly about the city, you must stay out of traffic.”

Buses operating in mixed traffic on city streets only underscore this point. On 14th Street in lower Manhattan in New York, for instance, buses on the M14 crosstown bus route traveled at just 3.8 miles an hour on average, barely faster than walking.

The transformation of 14th Street into a bus-only thoroughfare between Third and Ninth avenues at the beginning of this month has improved the performance of the M14 dramatically. Advance reports stated that New York transportation officials anticipated that buses on the M14 would move 25 percent faster with the busway. On-the-street comparisons bear out the advance projections: A New York Times reporter noted that M14 buses now completed the trip from First to Eighth avenues in 14 to 17 minutes, while M42 buses making the same trip along 42nd Street took more than twice as long, 31 to 36 minutes.

The performance of this and similar dedicated busways in other cities has led a writer for Curbed to issue a rallying cry for dedicated bus lanes.

The traffic nightmare opponents predicted would emerge on adjacent streets failed to materialize, Alissa Walker notes in her essay. Meanwhile, travel times have been slashed dramatically for M14 riders. If New York’s 18-month pilot on 14th Street replicates the performance of dedicated bus lanes opened in other U.S. cities recently, the downward trend in ridership on the M14 should also reverse.

So, Walker asks, “What if we do this everywhere in the U.S., starting next week? What if we woke up next Monday morning and every bus being slowed down by cars was freed from traffic?”

Ben Fried, communications director for TransitCenter, told Walker that “the impact would be stupendous. It wouldn’t solve every problem American bus systems are facing, but one of the biggest problems for transit in major cities is slow, unreliable bus service, and this would do a lot to address those problems.”

Giving every bus that needed it its own dedicated lane would not only lure more riders, it would help cut down on carbon emissions by moving more people through a transportation corridor. The article includes a video posted to Twitter by the Los Angeles County Metropolitan Transportation Authority that shows that, in a period of 20 seconds, the dedicated bus lane on Flower Street downtown moved 210 people through it, while an adjacent lane for cars moved only seven. Seventy buses per hour flow through the Flower Street bus lane at peak hours.

Meanwhile, in Minneapolis, transportation officials there say that a doubling of bus ridership would reduce greenhouse gas emissions by 30 percent. That city also plans to make dedicated bus lanes part of its transit improvement strategy.

With these stats arguing in favor of giving buses priority over cars on city streets, Walker’s concluding exhortation makes sense: “Let’s free the buses — and see where they take us.”