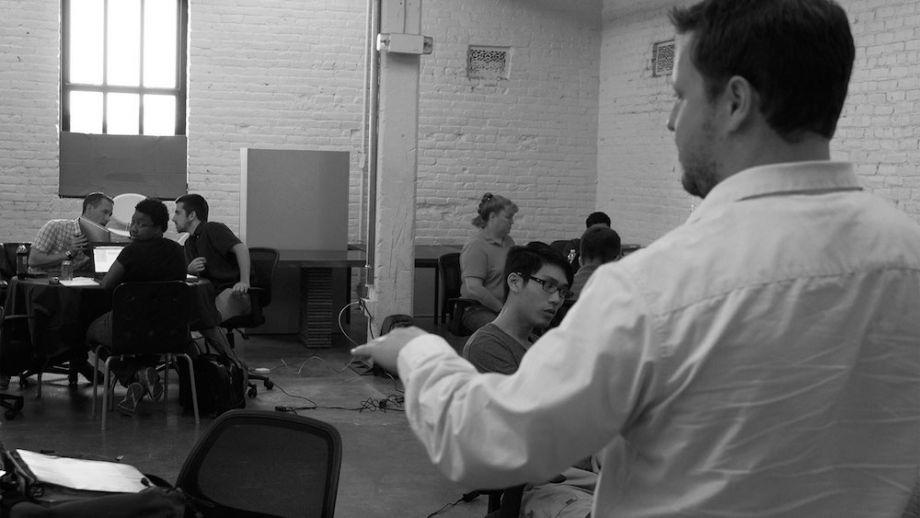 Nearly four years ago Doug Hocker gave up his dream of making it in the tech world. He’d spent a few thousand dollars on a for-profit college that provided little to no career guidance outside of a one-week stint delivering computers to classrooms (they didn’t even get to set them up). He resolved to earn money any way that he could, whether as a stock worker in the evenings at Walmart or cleaning up buildings as a janitor. But last February he lost his job, and after he spent eight months looking for work, a friend of his encouraged him to get back into the technology industry.

Now, a full year later, he’s more than tripled his salary and works for a Fortune 100 company as a network security developer thanks to a Richmond, Virginia, apprenticeship with Maxx Potential. The IT company hires and trains people by having them work on real projects with real clients — with the idea that they may even leave Maxx to go on to other opportunities after the experience.

Hocker’s friend suggested he check out a Maxx Potential one-day boot camp, just 24 hours before the event. He packed his bags and made the trip from his native Philadelphia to Richmond and never looked back.

Maxx Potential Founder and CEO Kim Mahan brought the apprenticeship idea to life after working 12 years at General Electric, where she led large IT teams managing developers from India to China to Mexico. All the while her concern was growing for the vast number of jobs being sent overseas when training people right at home was being overlooked. Mahan, who was once herself an unemployed, 25-year-old single mother juggling three kids, had an inkling about who was looking for work.

“I was trying to put food on the table so I built websites on the side to help make ends meet,” recalls Mahan, who has a master’s in computer systems management. “GE hired me not because of my college experience, but because I had a portfolio of work I was able to show that demonstrated my skills.”

That’s why she wanted to explore an apprenticeship program at Maxx Potential. Based on client workload, the company trains between 35 and 45 apprentices on average. According to Mahan, roughly 20 have been hired within a year directly by the corporate clients for which they were providing tech services. Most are with the program for a minimum of one to three years.

In the training-to-job pipeline, crash courses in coding are often criticized for requiring a large upfront investment without guaranteed job placement. Apprentices at Maxx Potential don’t take on any debt to participate, meaning for those who have decided the program wasn’t for them, there’s no added expense for pivoting.

“We try to be a bridge between knowledge and skill. Most of today’s tech knowledge is readily available for free if you know where to find it,” Mahan says. “Places like Udacity, EDx, Coursera [which offer free online courses] and others are built by some of the best minds working hard to make the content available. Maxx Potential exists to help guide people through content and to help those who can’t afford traditional degree programs or certification courses a chance to get into tech.” Through a partnership with the Virginia Department of Labor and Industry, Maxx trainees also have the option to obtain a formal credential as computer programmers, graphic designers and more.

Nearly half the people that show up to a Maxx Potential career lab have degrees in other disciplines. Those knocking on the front door have varying experience, from GEDs to PhDs and now want to work in tech. Some, like Hocker, had resolved to work in service jobs and try to teach themselves programming languages on the side. Mahan says that her program flips this practice.

The IT apprenticeship starts at $10 per hour with pay raises as skills increase across a four-level system. Some who reach level four are asked to become advisers to help teach incoming apprentices.

Mahan serves as the company’s only salesperson because it’s still a small operation but work steadily flows in through referrals from customers looking for back office IT support. Clients include small businesses, nonprofits and Fortune 500 companies looking to fill positions in everything from mobile app development to quality assurance testing.

The company took a small round of seed investment in 2013 but hasn’t raised any additional funding. Instead, Mahan aims for organic growth and hopes to expand into Norfolk and eventually to other U.S. cities.

Recalling his first few days at Maxx Potential, Hocker says that he was surprised to see so many people of different walks of life looking to get into tech, like truckers or teachers or students with psychology degrees.

“I’ve wanted to work on computers since I was 20 years old. Everywhere I went I couldn’t find a job, and I didn’t have enough experience to even land an entry-level position. Most of the time, I’d never hear back,” explains Hocker. “I’m forever indebted to Kim and Maxx Potential because there was no way I could get into the industry without the help and experience.”

Editor’s Note: This article has been updated to correct the figures about apprentice placements in outside firms.