A Tale of Two Disaster Command Centers: One Rich, One Poor – Next City

A Tale of Two Disaster Command Centers: One Rich, One Poor 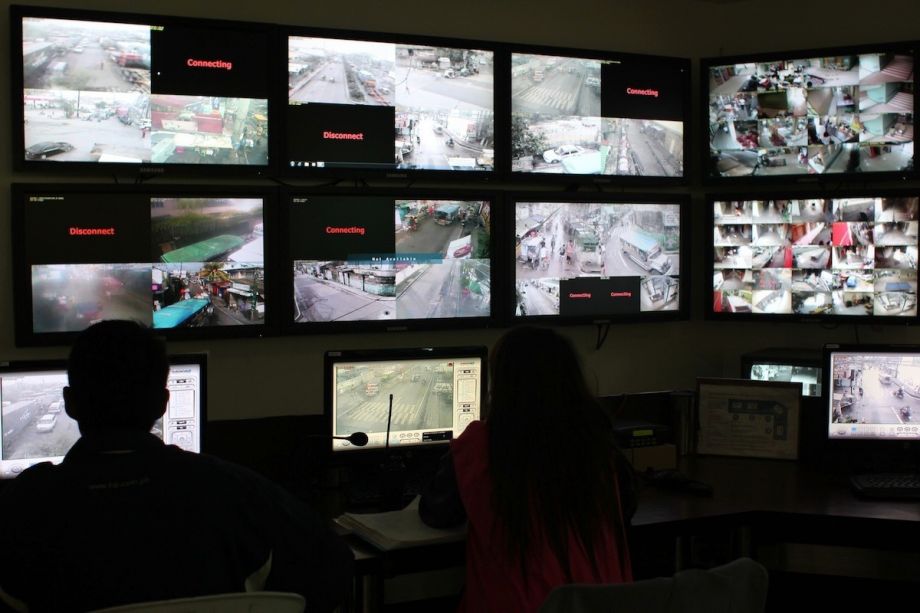 Employees monitor streets for emergencies via CCTV at Navotas’ disaster command center, which has 37 CCTV cameras, though only 27 are functioning.

On July 16, Typhoon Glenda (internationally called Rammasun) roared through the Philippines, shattering windows, uprooting trees and plunging large sections of the city into darkness. With 127-mile-per-hour winds – the equivalent of a category-three hurricane – Glenda was the first typhoon to make landfall in the country since last year’s Supertyphoon Haiyan cut a path of unimaginable destruction through the central islands.

Like New York City, Metro Manila is a collection of more-or-less administratively autonomous cities. Of these, Pasig is one of the richest. Across town, on the other hand, the city of Navotas is a city of shabby slums where driftwood homes balanced on spindly stilts. Pasig is known for it’s bustling business district and multinational corporations; Navotas, for it’s pungent fish sauce and homegrown shrimp-paste industry.

But though these two cities reside on opposite sides of the tracks, they both have one thing in common. Pasig is extremely prone to flooding, bordered on three sides by clogged rivers and Manila’s main floodway, which overflowed to flood the city to the rooftops for days during a 2009 typhoon. Navotas doesn’t fare any better – it hugs the gray waters of Manila Bay and lies partially below sea level, making it the most flood-prone city in Metro Manila.

Because of their perilous locations, both Pasig and Navotas have worked to increase their disaster-mitigation infrastructure. They have sea walls, water pumps, flood gates, dyke networks, storm signal systems and dedicated evacuation centers. And to manage the unexpected in the middle of a disaster – essentially, to pick up where mitigation and preparation leave off – both cities have set up disaster command centers. Once a storm is on top of the city, command centers are the last line of defense.

Command centers started cropping up in Manila in 2010. Before they proliferated, cities monitored damage, flooding and rescue needs by telephone. Neighborhood watch officers would call in to report if their streets were filling up with water, or if a family needed to be rescued. The system was constrained by human limitations — individuals can only assess so much damage at one time — as well as communications failures. Landlines and cell service often go down right when they’re needed most.

At 2 a.m. on July 16, as the outer bands of Typhoon Glenda started to batter Manila, Ritchie Van Angeles, head disaster officer for Pasig, had all hands on deck. The Pasig command center has 230 CCTV cameras covering 70 to 80 percent of the city. These were monitored by up to 50 employees on wall-to-wall panels of flat-screen TVs. Satellite imagery tracked the movement of the storm, and digital water-level sensors kept an eye on the likelihood of the rivers overflowing. At a staging ground not far from the command center, rescue and medical teams were ready to be deployed in the event of an emergency. When the electricity cut out, generators kicked in.

Van Angeles explains that the command center allows them to anticipate emergencies better. If flooding is imminent, they can save more people before the rivers overflow. The CCTV cameras allow them to see the extent of the damage across Pasig, so resources aren’t concentrated in one area, while, for example, another neighborhood is completely flooded a few kilometers away with no way of calling for help.

“If you have no information, then you can’t do anything,” Van Angeles says.

The command center in Navotas is decidedly more modest. They have 27 functioning CCTV cameras to Pasig’s 230. “We’re planning to add more,” says Nani Calayag, head of the Action and Command Center, “but CCTVs are very expensive and we have only a limited budget.”

During Typhoon Glenda, the energy company cut electricity in Navotas, including at the command center, to keep people from getting electrocuted in the event of a flood. The command center had a battery pack that kept the monitors going for two more hours, but after that, for the remainder of the storm, they were offline.

Ritchie Van Angeles, head disaster officer for the city of Pasig, meets with his team as Typhoon Glenda batters the Philippines in the early hours of July 16, 2014.

Calayag and his team sat in the dark, responding to incidents by cell phone until those, too, ran out of juice. For one of the most vulnerable areas of Manila, this situation is not ideal. Calayag’s wish list for the Navotas command center runs long, and it is tempting to see it as a list of protections Navotas is not yet able to provide.

At the moment, his 27 functioning cameras (and 10 under repair) are enough to monitor only the main roads of Navotas, not the coastal areas that were crushed by a storm surge in 2011, nor the villages so low-lying that even a garden-variety high tide can flood them. Right now, Calayag has a staff of 16 to run the command center, but he hopes to one day have an operator for every monitoring panel. He’d like high-tech communication equipment, because when typhoons bring down network providers it becomes difficult to get flood information from the neighborhood watch officers.

“We could not contact each other yesterday,” Calayag said. While the most essential rescue teams have two-way radios, rarely do neighborhood officials, who are responsible for reporting floods and rescue needs.

In the end, Typhoon Glenda spared Manila. The eye of the storm veered south, and the fast-moving winds meant less rainfall. There was no storm surge and flooding was minimal. Still, the fact that both Navotas and Pasig were able to take a serious blow from a major typhoon with no casualties, is notable.

Pasig proves that money can buy disaster resilience. But Navotas shows that it’s not the only way. At least for this storm.