This Revenue Stream is Working Wonders for Community Health, But Some States Want to Take it Away – Next City

This Revenue Stream is Working Wonders for Community Health, But Some States Want to Take it Away 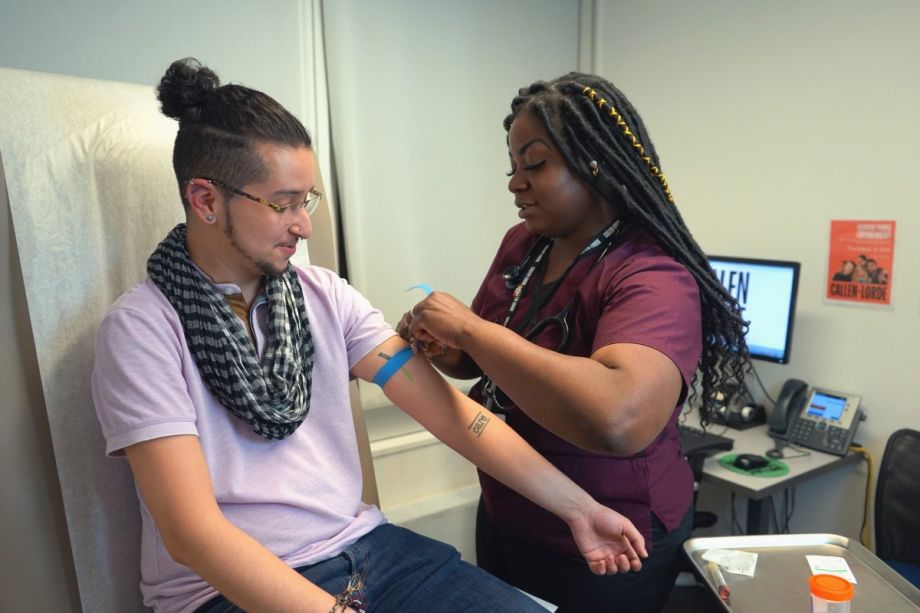 If you’re a patient of Callen-Lorde Community Health Center — a primary-care center that serves the LGBTQ community with its main clinic in midtown Manhattan — and you’re experiencing an unexpected medical issue, you can call the center and speak with a registered nurse who can help figure out whether you need the emergency room or a quick trip to a drugstore. It’s called nurse triage. Callen-Lorde has been providing this service for 15 years, and it had 30,000 nurse triage interactions in 2020 — a 20 percent increase over 2019.

Nurse triage helps save patients from a trip to the ER, not to mention saving the whole health system the cost of an ER visit that wasn’t necessary. Callen-Lorde doesn’t charge its patients for nurse triage — but unlike a typical patient visit, it can’t bill Medicaid, Medicare, or insurance companies for the service.

In 2019, Callen-Lorde provided 91,887 free tests for sexually-transmitted infections, with access to rapid results and presumptive treatment. Those STI tests and treatments aren’t billable to any insurance. In 2020, a lot of those STI testing staff and funding pivoted straight into COVID-19 testing, then pivoted again in 2021 to supporting COVID vaccinations. Nobody is fully funding or reimbursing Callen-Lorde for COVID-19 testing, outreach or counseling for vaccinations.

The funding to support this work at Callen-Lorde all comes from the same source — the 340B drug discount program, an idiosyncratic feature of the insurance-driven health care system we have in the United States. Since gaining access to revenue streams from the 340B program in the 1990s, community health centers like Callen-Lorde across the country have used that revenue to support a continually evolving array of health care programs and services that communities need but insurance companies, federal grants, or private philanthropy can’t or won’t fund.

But now, states including New York have been looking to take away community health centers’ access to 340B revenue streams. If the New York State legislature doesn’t repeal or delay changes passed in last year’s state budget — intended to help close an $8 billion budget gap — Callen-Lorde and more than 70 other community health centers across New York State will lose 340B revenue streams overnight on May 1 of this year. At Callen-Lorde, 340B revenues represent $12 million a year, or 14 percent of the organization’s annual budget.

“Our organization really changed course as a result of these revenues,” says Wendy Stark, CEO at Callen-Lorde. “Prior to 340B revenues being part of how we paid for our services, our service delivery model was much poorer. We didn’t have the kinds of clinical support teams that we do now. We didn’t have the kind of infrastructure for patient care that we do know. These revenues have been a critical part of building up our programs and services, improving our patients’ health outcomes and doing things like making a dent in the HIV epidemic in New York State.”

The 340B drug discount program is a feature of a health care system that depends on private or public insurance and private pharmaceutical companies to function.

In 1990, Congress passed legislation requiring pharmaceutical companies to provide deep discounts for medications covered under Medicaid and Medicare Part B. (Prior to 1990, drug companies usually negotiated with organizations directly, and soon after the new legislation passed, the companies started taking away the earlier separate discount agreements.)

So in 1992, Congress passed more legislation that created the 340B drug discount program, requiring pharmaceutical companies to provide up-front discount pricing on certain medications to qualified private entities in exchange for having their drugs be eligible for coverage under Medicaid and Medicare Part B. The companies don’t want to be excluded from such large consumer segments.

Under 340B, the qualified private entities include certain hospitals serving historically underserved or low-to-moderate-income communities and federally qualified health centers, like Callen-Lorde in New York City or Philadelphia’s Covenant House or D.C.’s Whitman-Walker. The federal government’s database of registered 340B entities has around 35,000 registered active sites, 15,000 of which are community health centers and other sites outside of hospitals.

The 340B-eligible entity acquires the medication at a deeply discounted price and sells it to patients at cost, or for free if patients can’t afford it. But if patients have insurance, including Medicaid, 340B-eligible entities can bill the insurance company or Medicaid plan a much higher negotiated rate for the drugs — and that’s where the revenue from 340B comes from. By paying $7 for, say, one month’s supply of Estradiol, a hormone therapy for trans people, a 340B site can dispense it to an uninsured patient for $7, or bill a patient’s insurance up to $106.40, generating revenue for the clinic to subsidize medication for uninsured patients or pay for other programs.

Crucially, 340B revenues come with very few strings attached. Community health centers are legally bound to use those revenues to fund basically anything that expands access to health care for their patients, so in addition to subsidizing the cost of medications for uninsured patients, these centers can spend 340B revenues on other programs. They don’t need to seek approval for spending the money, nor do they have to provide extensive grant reports documenting exactly how each of those dollars get spent. (There have been reports of hospitals using the 340B program to generate excess profits, but community health centers aren’t permitted to do that.)

“It’s been a foundation of community health centers for decades now,” says Colleen Meiman, who spent years at the National Association of Community Health Centers helping members understand how to maximize the impact of the 340B program. “This has been wonderful not because it’s a slush fund but because it can fund the things we find most important but we can’t find somebody else to fund. Three years ago you saw it starting to fund a lot of opioid treatment programs.”

Over the past few years, however, Meiman says around 35 states have been looking into taking away 340B revenues from eligible entities and retaining those revenues for themselves. Essentially, states would get rebates from pharmaceutical companies for 340B medications dispensed to patients on Medicaid. Community health centers would pay the higher negotiated price up-front for these drugs and seek reimbursement through Medicaid; states would then obtain a rebate from the drug maker. Essentially, it diverts revenues from the 340B drug discount program away from groups like Callen-Lorde and into state coffers.

States say the “carve-out” would make the program more transparent and that they can try to negotiate even deeper discounts from pharmaceutical companies.

Last year the Cuomo Administration in New York made this change to the state Medicaid program as part of a raft of changes intended to help fill an $8 billion overall budget hole for the state. The change was set to go into effect on April 1, at the beginning of the state’s fiscal year, but community health advocates already won a delay for the change to May 1.

In an FAQ published by the NY State Department of Health, the state says it believes it can save $87.2 million annually.

Meiman says that isn’t quite the case because of how Medicaid funding works nationwide. Every dollar states spend on their Medicaid program overall, they get 50 to 90 cents in automatic federal match dollars. So if New York spends $87.2 million less as a result of this change, it also loses at least $43.6 million in federal match dollars. Meiman says other states that have looked into the change that New York wants to make have realized the federal dollars they’d lose and have mostly backed off.

The NY State Department of Health FAQ on the change also says the department “recognizes that 340B revenue associated with Medicaid Managed Care claims is used to provide support services to vulnerable populations and therefore, has committed a multi-year reinvestment to 340B Covered Entities, which includes $102 million [for the upcoming fiscal year].”

But that $102 million would be split among 340B-eligible hospitals, community health centers like Callen-Lorde, and other eligible entities. Overall, 340B entities in New York take in an estimated $250 million a year statewide from the program, $100 million of which goes to community health centers, according to the Community Health Care Association of NY State. The association says 32 out of more than 700 community health clinic sites statewide would be forced to close their doors entirely. The FAQ also notes the change would be implemented overnight on May 1, without saying anything about a timeline to implement and disburse the $102 million.

In California, the motivations are less about budget holes and more about using the negotiating power of the most populous state in the country to get even deeper discounts from the pharmaceutical industry. The original date for the change to the 340B program in California was January 1 this year, and it was already delayed to April 1 because of concerns raised by the community health sector. An alliance of community health clinics in California filed a lawsuit in November 2020 to reverse the change.

Despite the fact that community health centers and other 340B providers have talked down many other states from making this change over the past few years, New York and California are bellwether states that could re-start the conversation, with huge ramifications for the vulnerable populations that community health clinics like Callen-Lorde serve.

Not to mention this is all about to happen in California and New York during what is still a pandemic.

In New York, as part of the annual budget negotiations that usually conclude at the end of March, the state senate has moved already to undo the change, and the state assembly has moved to delay it three years, so the ball is in the governor’s court to decide which of those options is acceptable. It’s possible that state budget aid coming from the most recent COVID-19 stimulus package will help reduce pressure to fill the state’s budget hole, but budget negotiations are coming down to the wire.

Stark says she has been preparing her staff for making massive changes starting May 1, but hasn’t had to consider cutting any jobs just yet as a result of this imminent change. She does note that some of her counterparts at other community health centers have already started cutting staff in anticipation of the loss in revenue.

“Some of the things paid for by 340B are so core to what we do, it would actually be all of our 18,000 patients who would be impacted,” says Stark.