Retrofitting, From the Suburb On Out – Next City

Retrofitting, From the Suburb On Out 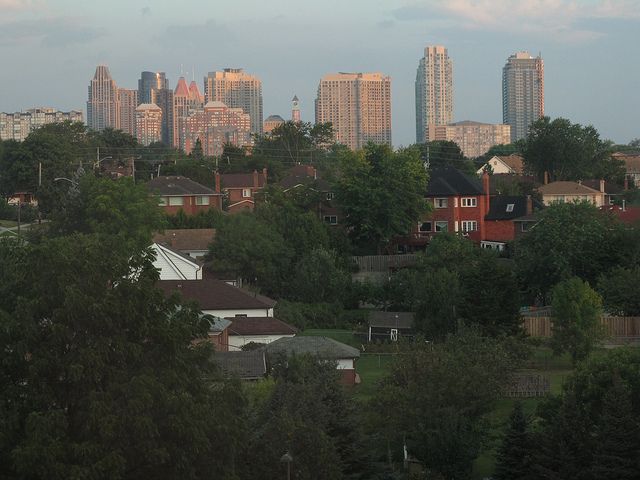 In Any Suburb, U.S.A., box stores usually line wide streets and empty parking lots frame strip malls. But as many residents begin to pack up and move to the city, suburbs are increasingly looking for ways to create distinctive, vibrant cores within the sprawl.

In Toronto, planners are resisting the traditional model of urban growth — from the urban core, outwards — in favor of a different strategy: Building mixed-used, walkable cores within the surrounding municipalities, according to the Globe and Mail.

Though the plan to build thriving mini-downtowns within the suburbs may rely on familiar tactics — street-level and transit-oriented development and tighter street networks — the strategy has not yet been used on such a large scale in North America. While the plan has its critics, some municipalities argue that building these developments is a necessity.

From a distance, Mississauga’s high-rise-dotted skyline evokes the appearance of a thriving downtown. In reality, wide gaps separate the Toronto suburb’s tall buildings, and big-box stores stud vacant sidewalks. With little land left to grow outward, Mississauga is looking to densify. In 2010, the suburb adopted a plan to concentrate development on a new main street, creating a pedestrian-oriented streetscape with street-level retail, smaller blocks and a new light-rail line to service the area. The renovated plaza in front of Mississauga’s city hall, complete with wading pool, stage and Jumbotrons, has received about a million visitors since it opened last summer.

Though this sort of development has little precedent in North America, a similar strategy — planning satellite cities — has been used by such cities as Tokyo, Stockholm and Singapore as a way to combat sprawl. Though satellite cities are not identical to suburbs (what with distinct local governments and large employment bases to support the resident population), they may serve as a model to Toronto and elsewhere.

On a smaller scale, suburbs in the U.S. are being retrofitted through mixed-use development and the creation of pedestrian-friendly commercial cores. The Seattle suburb of Bellevue is at work on an urban greenway, a new light-rail line and zoning codes for mixed-use development. Across the country, a neighborhood of Charlotte, N.C. that was built on a suburban model is using mixed-use development to invigorate the area. After Arlington County, Va. allowed the extension of the D.C. Metro to run through their dilapidated downtown, development in the area exploded and real estate prices soared. The demolishment of the Dallas Cowboys’ former stadium and extension of the Dallas Area Rapid Transit line may pave the way for similar transit-oriented development in Irving, Texas.

It’s been confirmed that U.S. cities are indeed growing faster than their suburbs. Though American sprawl may not fill up with mini-downtowns any time soon, the options to densify, and avoid going the way of big-box ghost towns, are increasing.