Retired Streetcar Makes a Comeback in El Paso – Next City 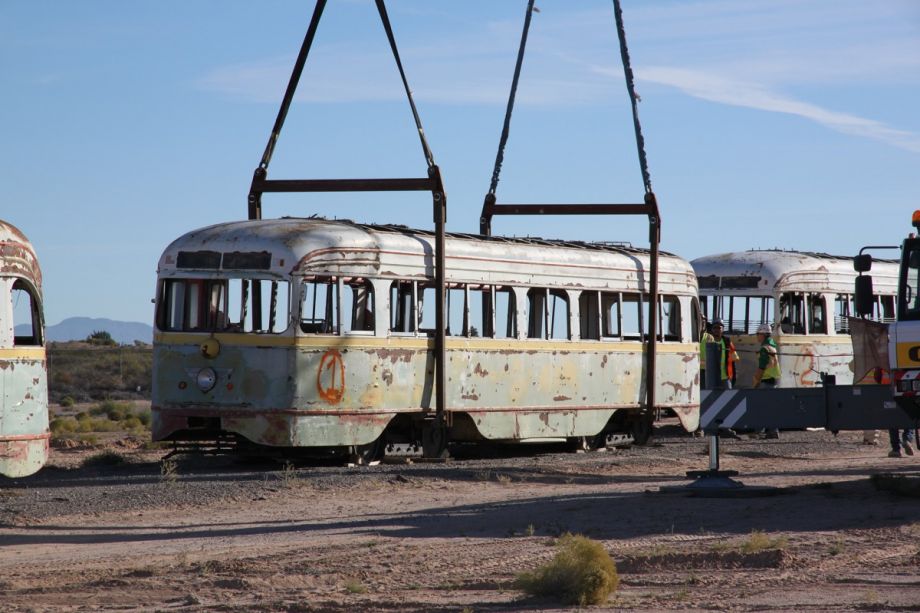 Retired Streetcar Makes a Comeback in El Paso
The Presidents’ Conference Committee (PCC) streetcars that worked the only international trolley line in North America have been rusting quietly ever since service on that line was suspended in 1974. Global Rail News reported last week that the first of six refurbished El Paso PCCs has arrived in the West Texas city, where they will re-enter service on a new trolley line that will stay on the American side of the Rio Grande.

The cars, which entered service in 1937, are being rebuilt by Brookville Equipment Corporation, which got into the railcar building business when it rebuilt a similar number of PCCs for the Southeastern Pennsylvania Transportation Authority to use on a revived North Philadelphia streetcar line. Brookville won the contract to restore these cars in 2015.

The rebuild gave the cars all-new electrical and propulsion systems, repaired and replaced structural components, redid their interiors and upgraded their door controls. In addition, the cars now have modern heating, ventilation and air conditioning, and pantographs have replaced trolley poles.

The cars will be painted in three different color schemes used on El Paso trolleys from the 1950s through the end of service. The remaining five rebuilt cars will be delivered over the course of this year. They will undergo testing onsite before returning to service. The line they will run on is now close to completion.

Charlotte Will Continue Commuter Rail Study, With or Without Tracks
Plans to launch a commuter rail line connecting Charlotte with the Lake Norman area have been in limbo since 2012, when the Norfolk Southern Railway (NS) threw a monkey wrench into planning for the “Red Line” by saying it would not allow the service to use its tracks.

But Charlotte’s Metropolitan Transit Commission (MTC) hasn’t given up on the idea. According to a news report in the Mooresville Tribune, the MTC voted on March 28 to continue with the $2.3 million Lynx Red Line/North Corridor feasibility study, which is being funded by the Charlotte Area Transit System (CATS).

The study began with a series of meetings last year intended to get feedback from corridor residents about what sort of service potential users would like to see. Huntersville Mayor John Aneralla, a member of the MTC board, pushed for a halt to the study because he feels that running the line on anything other than the existing NS tracks would be too disruptive to the development of the towns along the route.

Aneralla favors renegotiating with NS, but another commission member noted that the railroad shows no greater interest in allowing passenger service on its tracks now than it did when new leadership walked away from the idea in 2012. Davidson Mayor Rusty Knox told the Tribune that he voted to continue the study because he thinks it will provide other options for implementing service. “That doesn’t cancel or negate that we would like to use the existing rail, but what if we never get to utilize the tracks that Norfolk Southern owns?” he said. “That possibility is there, and I want all the options on the table.”

The 12.2-km (7.58-mile) line begins at a connection with Line 12-Sapphire at Engineer Goulart station and serves two stations in the suburb of Guarulhos, where the airport is located: Guarulhos-Cecap and Airport-Guarulhos. The line, the first to be built from the ground up by CPTM, cost 1.2 billion Brazilian reals ($362.4 million U.S.) to build.

Regular service will begin in the third month. Hours of operation will expand to 4 a.m. to midnight, and a new Connect service will operate between the airport and Brás station, the in-city end of Line 12, during peak hours. Connect trains will make all local stops between Brás and the airport without requiring passengers to change at Engineer Goulart. From the third month on, the metropolitan rail fare of 4 reals ($1.20 U.S.) will apply.

The airport express service will begin in the fourth month. This train will run nonstop between the airport and Luz station in the city center, allowing interchange with CPTM lines 7-Ruby and 11-Coral as well as lines 1-Blue and 4-Yellow of the São Paulo metro and other local transportation. Four trains per hour will make the run between the two end points. The fare for this service has yet to be set.