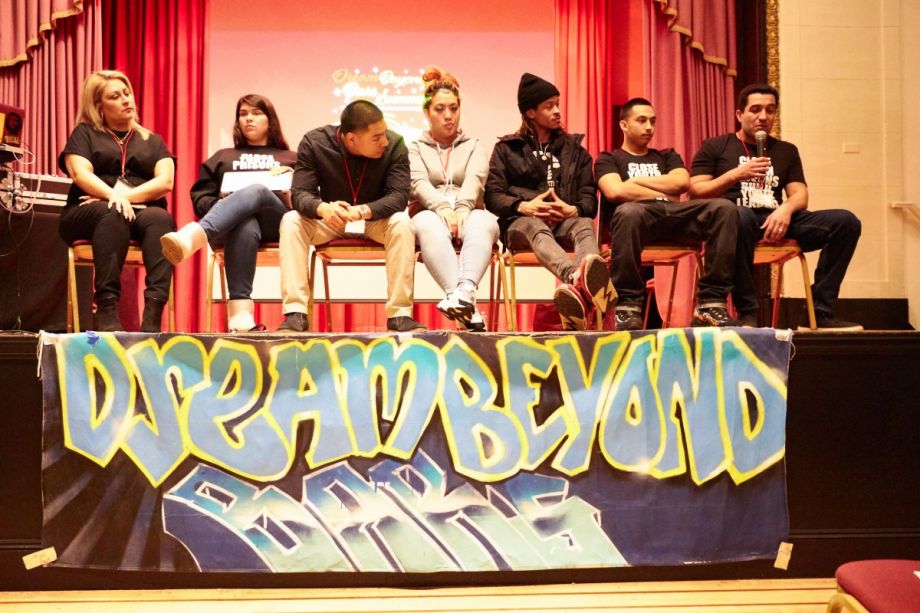 The Dream Beyond Bars Fellows program invited formerly incarcerated youth to be part of a participatory action research project. (Photo by Robert Brown)

One year ago, 19-year-old Xochtil Larios was incarcerated at Alameda County Juvenile Hall, a sprawling facility located atop a winding drive in San Leandro, California, about 10 miles south of Oakland. Larios had been in government systems, whether foster care or juvenile detention, since the age of 12, but this time would be different — thanks to Communities United for Restorative Youth Justice (or CURYJ, pronounced like “courage”).

“I got removed from my community,” Larios says. “When CURYJ came in, talked to me, and recognized my leadership roles and my enthusiasm, they gave me an opportunity.”

She was invited to join a participatory action research project led by formerly incarcerated young leaders. CURYJ, along with Oakland-based Urban Peace Movement, wanted them to find solutions to youth incarceration and build their leadership skills. The research project was grounded in the belief that formerly incarcerated young people should draw on their lived experiences with incarceration, and acknowledged they aren’t “subjects to be researched by others” but instead are experts on their own lives. (CURYJ, based in East Oakland, was co-founded by George Galvis, who was incarcerated as a teen.)

“We just had to direct their passions to the right area and the right tables,” he says. “Young people just didn’t know there was a table for them to sit at, speak their minds and speak their truth.”

The fellows carried out a three-pronged research process. First, they reviewed public information like budget reports, incarceration rates, and local and statewide criminal justice reports. Then they held focus groups with formerly incarcerated young people, as well as family and friends impacted by youth incarceration. Finally, they gathered data through a town hall survey.

In February, after 18 months conducting outreach and research, Larios helped organize a summit to present their report, which includes policy suggestions. They found that on the busiest days, Alameda County Juvenile Hall stands at 21 percent capacity. Most inhabitants are young people of color: Within the county, according to the report, Latino youth are 2.3 times more likely to be arrested for a felony than white youth; that figure is 10.6 for black youth.

The report (which will be released to the public later this month) outlines major themes that emerged from the focus groups and survey. One finding stresses that once youth enter the system it becomes difficult for them to find a way out, because government institutions aren’t reaching root problems.

Marginalized youth need money, guidance and support, the report says, while youth also revealed that alternatives to incarceration — particularly ankle monitors and group homes — can be as traumatizing as incarceration itself.

One important theme the fellow’s research revealed: Youth impacted by the system had experienced significant trauma at a young age, prior to incarceration. Some focus group participants described using marijuana and other substances to cope with traumatic experiences. Eventually, some experienced so much trauma that it became normalized and learned behavior.

“It goes to show we’re not addressing this with a solutions-based approach,” Mendoza says. “Hurt people hurt people.”

A finding that “healing community-based alternatives are more popular than incarceration” informs the solutions-based element of the report. “We know if you send a young person to a [community-based] organization, they’re better off than being in the system,” says Mendoza, who was incarcerated prior to joining CURYJ.

In the report, the youth define community-based solutions as “solutions that address the harm caused to and by youth so that healing can take place outside of confinement, as well as address and create solutions to the circumstances that caused the individual to get arrested or detained.”

The report compares the cost of incarcerating a youth in Alameda County, at $240 a day, to community programming, which average $75 a day. It highlighted organizations throughout California, like Youth Justice Coalition and Young Women Freedom Center, for their community work.

The release of the report is a first step. Mendoza says the fellows will next apply their new skills in meetings with community leaders and elected officials where they will present their findings and make policy recommendations to address youth incarceration in Alameda County. These include eliminating probation, ankle monitors, group homes and juvenile detention for minor offenses, as well as investing in community-based solutions and organizations.

“The nature of this work is that you never take a break,” Mendoza says. “Now, with the findings out, the real work begins.”