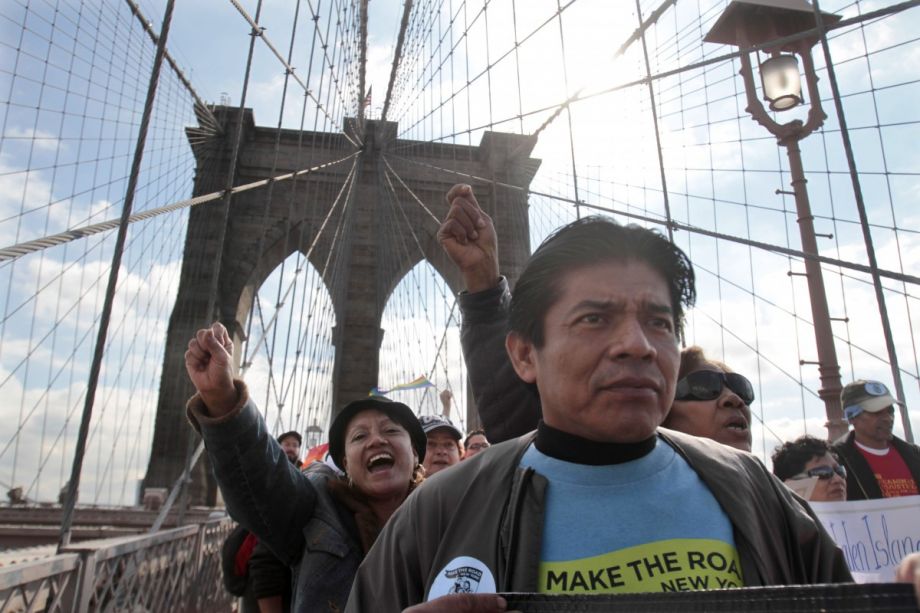 Communities have been organizing for years to put and end to cooperation between federal immigration enforcement and local law enforcement. This is a 2010 photo of a coalition of Latino workers, clergy and civic leaders march over New York's Brooklyn Bridge against the Department of Corrections policy to “funnel” illegal immigrants into the Immigration and Customs Enforcement (ICE) detention and deportation program. (AP Photo/Bebeto Matthews)

Court officers in New York state have, in some instances, actively cooperated with Immigration and Customs Enforcement to alert ICE officers when immigrants arrive for court cases, documents obtained by Documented NY show.

ICE arrests of undocumented immigrants at courthouses have risen in recent years, a NY Daily News report found. Often, officers wait outside for targets to exit, then swoop in. According to the Immigrant Defense Project, which counted 127 arrests at courthouses in the five boroughs of New York in 2018, the officers operate in plainclothes, and often “swoop in and throw their target in an unmarked vehicle without identifying themselves as ICE agents, showing badges or explaining why the person is being arrested, according to the report” as reported by the Daily News.

But more chilling are the reports — six in all, Documented NY says — that show that court officers or clerks helped ICE make their arrests.

In this handful of cases, Documented NY says, officers asked court officials to alert them when a certain individual appeared for his court date, then arrested him in the parking lot or in the hallways of the court.

Lucian Chalfen, spokesman for the Office of Court Administration confirmed four incidents. “Two occurred just as we began to track ICE interactions in our courts and before we issued a new policy, in April 2017, specifically brought about by ICE appearances at court buildings. The latter two were simple requests for publicly available information, contained on eCourts, regarding a future court date and whether an individual was on trial,” he said.

Both prosecutors and public defenders have denounced the practice of immigration officers arresting individuals in and around courthouses, Documented NY said. If a defendant in a criminal case is taken into immigration custody, he often misses criminal court dates. Then, ICE attorneys can use the unresolved criminal court charges in immigration court to argue against a detainees’ release on bond or parole.

This can have a chilling effect on the criminal court system, with immigrants afraid to even go to their court dates, testify, or seek justice if they are the victim of a crime.

A report from the ACLU found that a survey found that about a fifth of police officers said that immigrants were less likely in 2017 than 2016 to make police reports or work with prosecutors.

“We’re all safer when everyone can feel comfortable participating in the justice system, regardless of their immigration status,” state Sen. Brad Hoylman (D-Manhattan) told the Daily News. Hoylman introduced a bill earlier this month that would prohibit ICE from arresting people at a courthouse without a warrant.

New York Chief Judge Janet DiFiore has said she lacks the authority to ban ICE agents from conducting arrests in courthouses, since they are public buildings, Documented NY reports.

Dennis Quirk, the president of the New York Supreme Court Officers Association, told Documented NY that in each of the incidents involving court officers, ICE had had a warrant. Documented NY asked “if these were regular judicial warrants or ICE administrative warrants — which ICE can issue itself, without the need for a judge to sign off, and which are not generally considered legally binding,” and Quirk told the outlet he didn’t know. “We’re not lawyers that determine what kind of a warrant somebody has, if they have a piece of paper that says it’s a warrant, a warrant for somebody, that’s it,” he said.

ICE courthouse arrests are certainly not an isolated New York City or state phenomenon. While the Immigrant Defense Project has found a 1700 percent increase in ICE arrests and attempted arrests across New York State, courthouse arrests have occurred in dozens of states, NPR reported. ICE has blamed sanctuary city policies for the increase: “the increasing unwillingness of some jurisdictions to cooperate with ICE in the safe and orderly transfer of targeted aliens inside their prisons and jails has necessitated additional at-large arrests,” the agency wrote.