Report: Unsubsidized Solar Power to Compete With Natural Gas by 2025 – Next City

Report: Unsubsidized Solar Power to Compete With Natural Gas by 2025 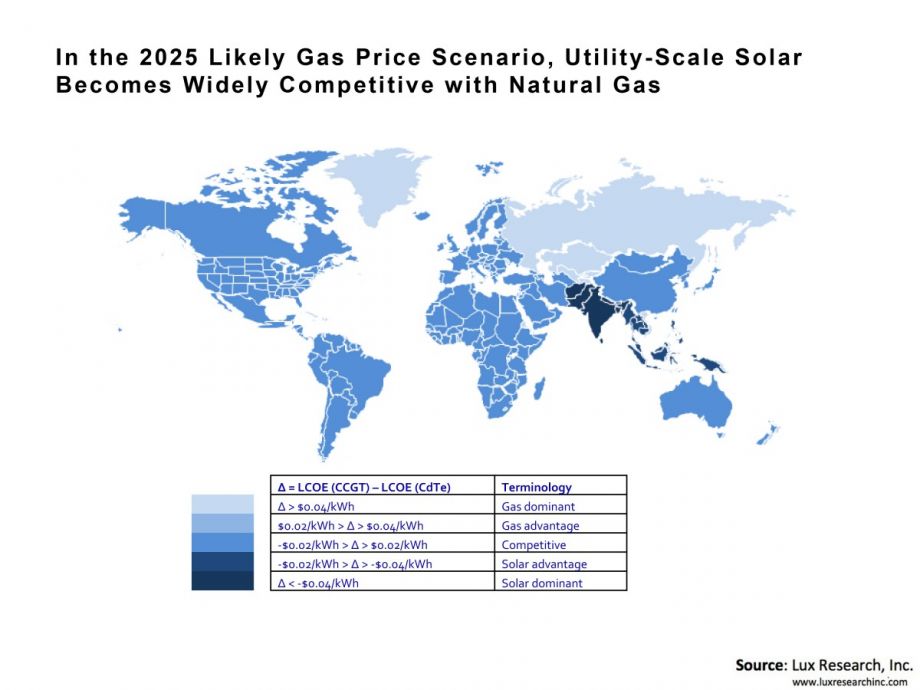 With the recent uptick in hydraulic fracturing, or “fracking,” for shale gas in the U.S. and abroad, some renewable energy advocates have worried that cheaper natural gas could harm solar’s competitiveness. Not so, says a widely cited report out by Lux Research, a multinational research firm focusing on emerging technologies.

According to the report, unsubsidized solar power could compete with natural gas worldwide as soon as 2020, and become competitive in all 10 global regions examined in the report by 2025.

“While solar is far from competitive with natural gas today,” the authors write, “government subsidies insulate solar from direct competition.” But legislators in Europe have already signaled a pull back from the old, subsidy-heavy solar model. Spain, a major solar power producer that put the brakes on solar subsidies following its economic crash, is a prime example. For solar to succeed, it will eventually need to stand on its own two feet, without the help of government subsidies.

Fortunately for solar boosters, the Lux Research study concludes that utility-scale solar production costs — that is, large solar farms directly owned by power companies, as opposed to small-scale, distributed rooftop systems on individual homes and businesses — will fall 39 percent by 2030. This will dovetail with a number of upward pressures on prices for fracked natural gas, from government policies limiting the practice in Europe; to the high cost of capital and equipment in South America; to increased domestic demand, presumably for heating, in North Asia and North America; to “fewer-than-expected economically recoverable shale reserves” in North America, the Middle East and Oceania. Altogether this could boost solar’s competitiveness vis-à-vis fracked gas.

And Lux isn’t the only one predicting solar will become competitive without subsidies in the near future. A July report by Deutsche Bank found that “the underlying economics of the sector have improved significantly and we may be just at the beginning of the grid parity era.”

“Low natural gas prices may make large utility scale solar deployments in the US less attractive for now,” wrote study author Vishal Shah, “but we remain bullish about rapid development of utility scale solar in several international markets over the next 3-5 years.” He continued, “Solar appears to be in the beginning stages of transitioning between ‘alternative energy’ and a truly cost competitive source of energy that may help both producers and consumers hedge against rising electricity rates and fuel costs.”