Report: NYC to See Spike in Low-Skill Jobs – Next City 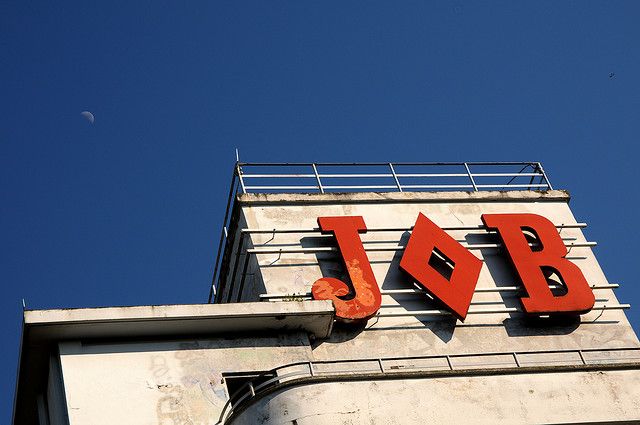 While the national unemployment rate remained relatively consistent last month, New York City may see an ample 26,000 jobs open annually over the next decade, according to a report released today by the Center for an Urban Future.

The Manhattan-based think tank has identified 26 occupations, most of them entry-level, that could potentially provide opportunities for younger New Yorkers with limited education and experience: The people who have traditionally had the hardest time finding employment.

You won’t find the most glamorous jobs in the world listed in the report — meter reader, bank teller and bill collector are all included — but in an economy where competition can be so fierce that college graduates often need three interviews to get hired as a barista, this small profusion of openings in certain fields could provide a breath of fresh air for job seekers. 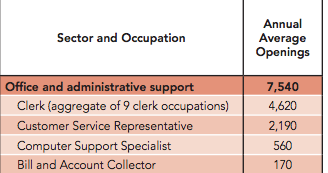 Example of predicted annual openings in office and administrative work. Credit: Center for an Urban Future

For instance, retail sales and cashiers jobs are predicted to soon account for over new 6,000 hires every year. The customer service industry should soon need over 2,000 representative annually, and nearly 900 nurse assistants and patient care technicians may soon join the workforce.

However, with some jobs offering meager starting salaries — quite a few average below $20,000, which many would argue is not a realistic wage to live on in New York — the news might not be so promising for those who can only find work as janitors or bellhops.

That said, some jobs on the list, particularly in those in telecommunications and utilities, have median starting salaries that are — at least to this blogger — downright enviable.

One factor contributing to this modest job growth is an aging population. As the number of New Yorkers aged 65 and over nears 35 percent, there’s been more turnover in more low- and mid-level positions (A higher number of elderly people has also led to increased demand for specific workers, such as paratransit drivers.)

The report finds that access is one of the more prohibitive barriers preventing younger New Yorkers from finding and keeping jobs, and suggests that the city enact workforce development programs specifically geared toward young adults. Many cities and metropolitan areas are scrambling to retain college graduates, but when even prosperous New York has an unemployment rate hovering around 9 percent, policymakers shouldn’t forget about younger people without degrees.