Matthew Desmond’s 2016 book Evicted shone a spotlight on the burden and trauma evictions place on poor families — and on the lack of data about evictions nationwide. There’s currently no national database on evictions, though the U.S. Census plans to start tracking them in 2017. A new study by real estate website Redfin, however, estimates that 2.7 million renters faced eviction in the U.S. last year, and that those numbers will continue to rise as long as housing prices do.

Not surprisingly, neighborhoods with the highest median rent-to-income ratios had much higher eviction rates than neighborhoods where residents were able to spend less of their income in rent. Over half of all U.S. renters spent at least 30 percent of their income on rent in 2015, due in part to an insufficient supply of affordable housing coupled with stagnant or falling household incomes, and between 2011 and 2014, the median rent-to-household income ration grew more than 2 percent in most metro areas.

By analyzing more than six million eviction records across 19 states where data was available, Redfin found that the 15 metros with the biggest increases in portion of income spent on rent also experienced an increase in the number of evicted families. Those metros — which were topped by Allentown, Pennsylvania; Jacksonville, Florida; Los Angeles; and Newark, New Jersey — experienced an average increase in the rent-to-income ratio of 5.8 percent between 2011 and 2014, and an increase in the number of evicted families of 3.8 percent in 2014. The other 56 metro areas experienced an average decline in evictions of 1.4 percent.

The proportion of residents who are cost-burdened was not the only predictor of eviction rates, however. The report notes that the ratio is fairly low in Las Vegas, but one of every 12 rental households there are evicted each year.

“Evictions are a silent threat to America’s cities,” said Redfin chief economist Nela Richardson in a statement. “As alarming as Redfin’s finding on evictions is, it likely undercounts the true number of families forced out of their homes each year since many evictions happen outside the court system.” 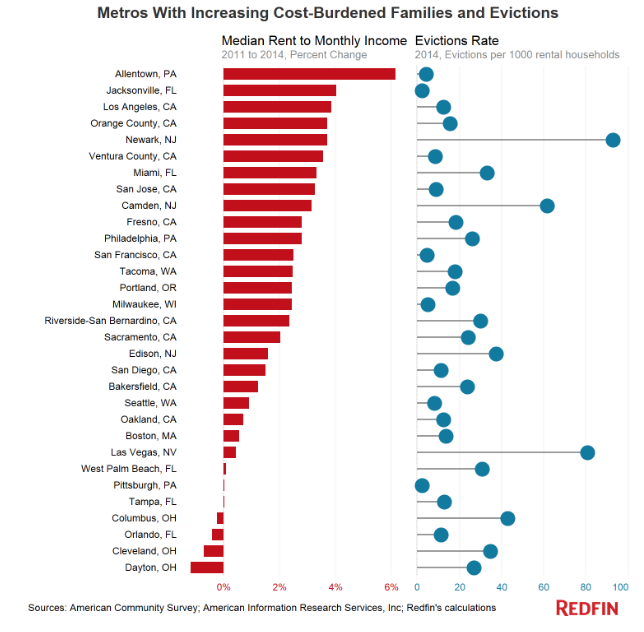 Drawing on data from the American Community Survey, the study also found that evictions are most common in areas with higher numbers of foreign-born residents. The top 10 percent of neighborhoods by eviction rate had rates of foreign-born residents higher than 11 percent. The neighborhoods at the bottom 10 percent of evictions had foreign-born populations of less than 8 percent. In Northern Virginia, the Washington Post has reported on landlords targeting renters based on immigration status by requiring Social Security Numbers.

The study also points to some local interventions. New York Mayor Bill de Blasio has expanded spending on legal services for low-income tenants facing eviction. Three years ago, according to the city, only one in 100 tenants in housing court had legal representation. This year, more than one in four did. As a result, evictions have declined by 24 percent since 2013. D.C. is now looking to replicate the program.

Redfin also suggests that in denser coastal cities, more housing supply is necessary to stem the affordability crisis and hence the eviction crisis. In Rust Belt cities, where there is ample housing supply and lower housing costs but stagnant wage growth, Redfin suggests an expansion of the Section 8 voucher program. Currently, only about a quarter of eligible renters receive any assistance.