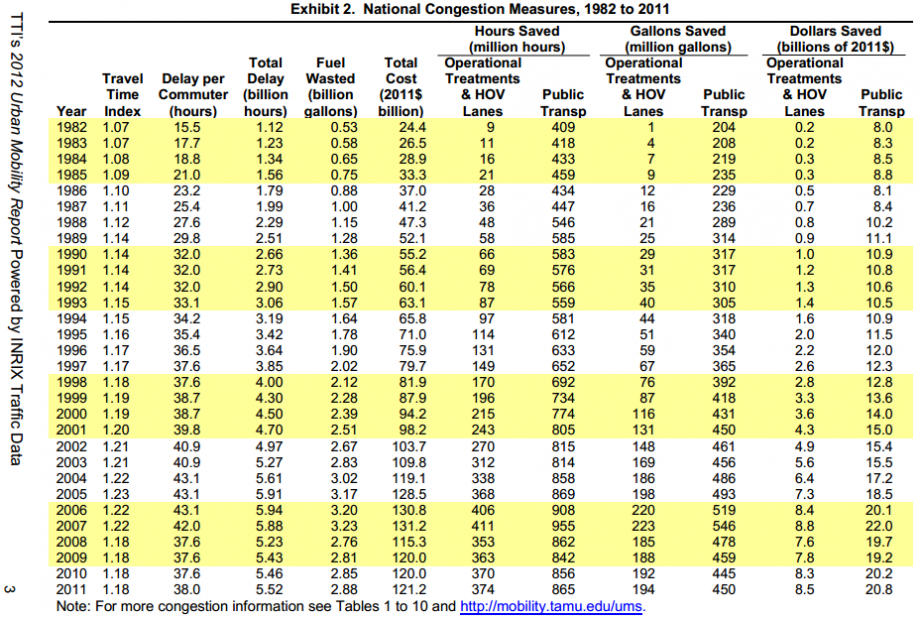 If traffic jams make you grit your teeth, just wait until you hear what they do to your wallet.

The total cost of traffic congestion in urban areas around the country has grown by about $27 billion since 2000, according to the Texas A&M Transportation Institute’s 2012 Annual Urban Mobility Report.

Taking into account fuel use and extra time lost, the report finds that congestion in nearly 500 U.S. metropolitan areas rose in total cost from $94 billion in 2000 to $121 billion in 2011, the last year for which data is available.

Beyond money, drivers spent an extra 38 hours each — and about 5.5 billion hours collectively — traveling in 2011 thanks to congestion, according to the report. During this time, their vehicles sent 56 billion additional pounds of carbon dioxide into the atmosphere. Individually, average drivers each lost about a week’s worth of gasoline in 2011 thanks to all that time spent stuck in traffic.

Thirty years ago, car commuters suffered only half the amount of wasted time (in 1982, about 15.5 hours each) that drivers today deal with due to congestion. However, that number has grown steadily every year and shows no sign of dropping off or — forgive the pun — slowing down.

On the flip side, the amount of time, money and gas saved by taking public transportation has only increased over the last three decades. Since the early ’80s, the total money saved nationwide due to public transit use has more than doubled, going from $8 billion in 1982 to $20.8 billion in 2011. (Again, we’re talking in terms of both fuel and precious time that hasn’t gone to waste.) Productivity-wise, that’s more than 450 million collective hours put toward something other than sitting behind the wheel of a car.

It’s much more than HOV lanes, which two years ago saved buddy-upped drivers only $8.5 billion and 374 hours altogether, can show for.

To get traffic and congestion data broken down by city, check out this page on the Transportation Institute’s website.

Finally, cyclists will notice one glaring omission: The report does include a couple of general policy recommendations about bike lanes, but beyond that doesn’t give any hard figures on the time and money that cycling has saved commuters. Perhaps something to include next year?