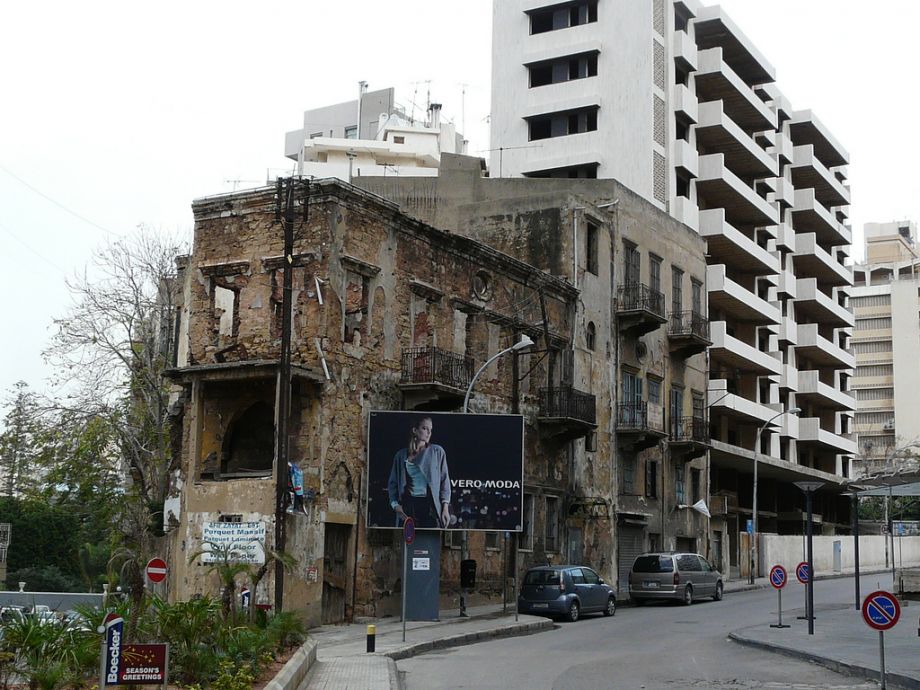 Due to “old rent” laws, it’s not uncommon to see decrepit buildings standing next to luxury high-rises in some of Beirut’s richest neighborhoods. Photo credit: Varun Shiv Kapur via Flickr

Every evening for the last three months, water has cascaded down the front of a seven-story apartment block in the central Beirut neighborhood of Hikmat, gushing from an overflowing tank on the rooftop, straight down into the street drains below, water-logging and probably destabilizing the buildings’ foundations along the way.

Why nobody has fixed this wasteful, noisy and dangerous problem elicits a range of explanations from residents, but one answer appears to have consensus: there is neither money nor motivation to maintain the building, because the majority of tenants are what is called “old rent.”

Lebanon’s old rent law is bizarre. It essentially froze all existing rents in the city in 1992. Some people with frozen rents have paid as little as $200 a year ever since. But the era of old rent may soon come to an end. A new law drafted to replace the original passed in parliament this month. The law is based on a complicated incremental increase of rents that will see tenants pay a 15 percent increase for the first four years, and a further 20 percent increase on the next two. After that, they can pay the market value of the property, or leave. This month, the new law was held up by the president, who asked the Constitutional Council to look into the constitutionality of it, saying: “Any law that does not grant social justice will be unfair against a certain segment of the people.”

He’s referring to the wave of extreme gentrification that many fear will wash through the capital with the new law, emptying it of low-income and vulnerable residents. This month, rival protests took place as both landlords and tenants took to the streets to protest the old law and its repeal, respectively.

Lebanon’s rent-control law was first enacted after World War 2. In 1992, the law controlling rental prices was extended, after a period of hyper-inflation during the second part of the Lebanese Civil War (1975 – 1990). When the Lebanese Lira dropped from peak exchange rates in 1993, the values of rental contracts signed on the basis of the pre-inflation economy were reduced to a fraction of what they were worth originally, and there they stayed.

Unlike, say, New York, where the number of rent controlled apartments has dwindled to a negligible number, old rent apartments make up a big chuck of Beirut’s real estate. While there is no reliable data available, Kamal Hamdan, an economist and managing director at the Consultation and Research Institute (CRI), a consultancy that focuses on social and economic development issues, estimates that approximately 150,000 of the 877,000 principal rental dwellings are old rents. The vast majority of these are in inner-city Beirut, on prime real estate and surrounded by luxury properties, where two-bedroom apartments, sometimes on the same block, attract upwards of $12,000 a year in rent.

Landlords stuck with old rent apartments complain that their properties are essentially being occupied, and that they’re carrying the state’s obligation to provide low-cost housing for the poor. Even worse, not all old rent tenants are poor — there are many cases in which old rent tenants have additional sources of income and investment, and are profiting off a law meant to keep poor people from being thrown out on the street. Without the rental income to maintain the buildings — and because old rents remain inheritable — landlords say they have no option but to wait until the buildings collapse, or the tenants, along with their families, migrate or die.

Joseph Zoghraib, president of the Syndicate of Property Owners and Rented Buildings, has boycotted paying taxes for 20 years over old rent — “When I get my rights, I will pay them again,” he says — and estimates that the laws have resulted in a loss of $400,000 in taxable revenue on each apartment over 40 years, based on crude calculations on the current average property valuations.

“If the government thinks they need to subsidize housing, then let them go ahead and do so, at their own expense,” says Zoghraib, “but I am the one paying this burden.”

Where the low-income people who subsist on old rent would go is unclear, however, because for all the problems inherent in this system, Beirut has a massive shortage of low-cost housing. Development is booming, but it caters to the high-end buyers’ market. Members of the Lebanese diaspora, with money made offshore, are snapping up luxury properties as investments, while the average salary in Lebanon remains about $500 per month, placing such properties well out of reach for the average Lebanese.

“Without preparing a national housing policy we can’t, as a parliament, take this decision,” says Hamdan.

Former Labor Minister Charbel Nahas agrees, predicting the new law will lead to a social and economic disaster. “It’s a major jump towards gentrification,” he told Next City.