A Remote Courthouse Leaves Many Chicagoans Far From Justice – Next City

A Remote Courthouse Leaves Many Chicagoans Far From Justice 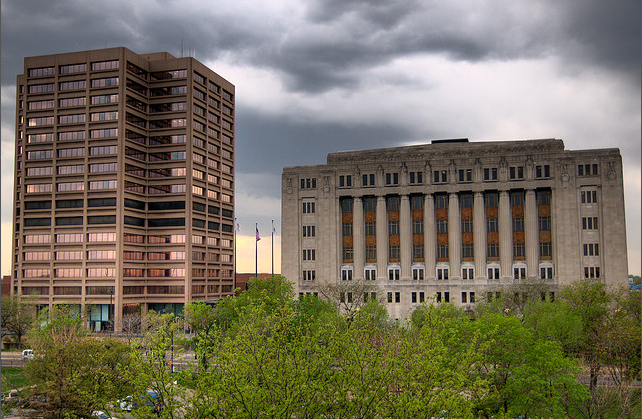 Last year, Chicago saw 506 homicides, 1,383 sexual assaults and more than 13,000 robberies. Along with tens of thousands of other felony cases, these crimes were all adjudicated at the George N. Leighton Criminal Court Building on the city’s Southwest Side. It is the nation’s busiest courthouse, consolidating all Chicago felony cases in one inconvenient location.

And it may be a culprit in Chicago’s struggle to involve communities in courts.

Several ideas with similar-sounding names are gaining momentum within the justice policy community. Restorative justice, a philosophy profiled in the New York Times Magazine last month, aims for offenders to redress harms to victims and communities. It borrows from conflict resolution, mediation and deterrence. Meanwhile, social impact financing uses the tools of investment banking and behavioral economics to seek justice through more efficient governance. The cost-benefit approach mines data for answers while a medical model gleans insights from randomized trials. The list goes on.

Access to justice is perhaps the most basic of these. Fueled by the idea that a justice system with high levels of community participation will be more effective, this concept strives to break down barriers to justice. Most of these barriers are figurative — including class, poverty, education and procedural delays — but others are quite literal, such as the distance between communities and their courts.

But in 1925, when Cook County’s criminal court location was selected, access to justice was not top on a planning committee’s priorities. Journalist Steve Bogira gives a history of the building in his book, Courtroom 302: A Year Behind the Scenes in an American Criminal Courthouse:

The first sites considered were all downtown, out of regard for the convenience of those who would use the courthouse. But then a committee member proposed a large parcel of land at 26th & California… Because the land was owned by the city, it could be obtained cheaply through a city-county swap. Committee members allowed that the location was far less accessible than the downtown sites being considered, but argued that accessibility had its drawbacks. A downtown jail hurt a city’s spirit, committee members maintained, as well as the values of nearby businesses.

And so the committee settled on 26th and California. Politics may have also influenced the decision. Most of the committee members owed their allegiance to county board president Anton Cermak, in whose ward the chosen site happened to be. So what if for decades judges lawyers, jurors, witnesses, and relatives and friends of defendants would have to struggle to reach the remote location; the important thing was that members of Cermak’s ward organization, to whom the count board president could dole out courthouse and jail jobs, would have a pleasantly short commute. And if a host of lawyers did indeed establish offices up 26th Street and down California, it wouldn’t hurt Cermak’s real estate holdings in the area.

But lawyers did not establish offices up 26th Street and down California. The location is so bereft of hospitality — the nearest place to get coffee, a Dunkin Donuts, is three barren blocks away — that people, including defendants and their attorneys, regularly meet just outside courtrooms or on the courthouse steps.

I cannot find any published studies arguing for or against this point about courthouse proximity. But the American Bar Association, the largest professional society for attorneys, made the point last year in their Access to Justice Assessment Tool:

Putting a court in an undesirable and hard-to-reach location is bound to affect participation of not only defendants, but also victims, witnesses, jurors, advocates and others.

As Ryan Lugalia-Hollon pointed out this week, many of Chicago’s witnesses to and victims of violent crimes are extremely reluctant to testify in court. Without this community cooperation, violent crimes are nearly impossible to prosecute. As a result, last year, “gunmen who shot and wounded someone got away without criminal charges 94 percent of the time,” according to a DNAinfo.com Chicago report.

Jurors from communities plagued by violence often do not make it to court either. A recent study of citizen responses to jury summons found cultural differences and limited discretionary time to be the leading causes for America’s extremely low jury participation. In cities, as many as 80 percent of citizens decline to participate in this expression of civic power. Locating the courthouse in a distant, unfamiliar and unsafe neighborhood likely only compounds these issues.

As an advocate working for a small non-profit, every trip to the courthouse raises a dilemma: Forfeit an hour’s wage to a taxi, or lose an hour of time to the bus? Students at any of Chicago’s six law schools are less likely to take an interest in criminal law when the civil courts are so much more conveniently located in the Loop. When time is at a premium, location matters.

Of course, just as with any organization, centralizing has its advantages. It yields huge economies of scale from shared infrastructure and staffing. And the Cook County Criminal Court administration building shares a lobby with the courthouse, saving overworked prosecutors and public defenders considerable time shuttling between their offices and the court.

The Criminal Court Building is also adjacent to Cook County’s only jail — again, the largest in the United States, detaining between 9,000 and 10,000 men and women at any given time. Nine-tenths of the jail population is awaiting the resolution of their case, a process that takes between four and six months for a typical felony other than murder. So while defendants who are released before trial must travel to the court every few weeks, the defendants in Cook County Jail are simply led through the tunnel connecting the jail and the courthouse.

But many cities, including New York and Minneapolis, are finding that community-based justice makes up for upfront costs through more efficient case processing, improved defendant compliance and, critically, greater perceptions of fairness.

In the grand scheme of justice, it’s fair to shrug at the question of a courthouse’s location. But to the extent that a thoughtful location can empower communities to participate in the justice process, this detail is essential. As Chicago looks for ways to restore peace in the streets, we might consider bringing courts back to the community.

Katy Welter is a law and policy analyst for the Chicago Appleseed Fund for Justice, where she advocates for fair and efficient criminal justice policies. The views expressed here are her own and do not necessarily reflect those of her employer.