Remaking the “People’s Playground” – Next City 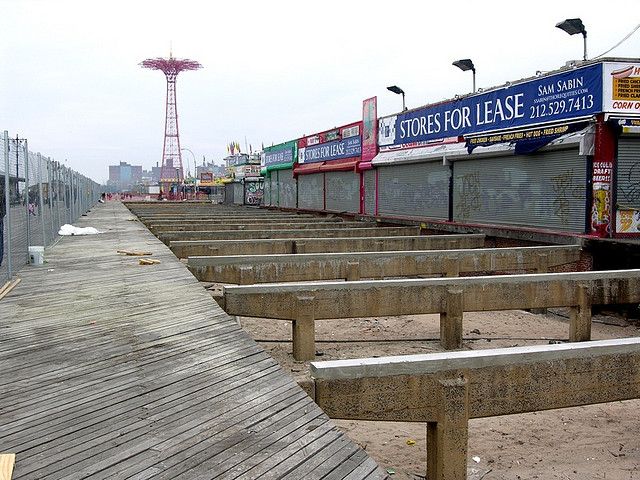 A “new” Coney Island exists — if only on paper, in developers’ colorful renderings of bustling boulevards and in lengthy rezoning plans, The Brooklyn Bureau reports.

In 2003, New York City rolled out a 30-year plan to remake the once-grand beachfront on the southwestern tip of Brooklyn.

From the early 1800s through the early 20th century, Coney Island was widely regarded as the world’s greatest urban amusement park. Though Coney Island’s amusement zone has shrunk with every passing decade since the Great Depression, the area remains a relatively popular destination — nostalgic, easily accessible and cheap.

The revitalization plan largely focuses on efforts to rezone and redevelop the vacant lots that sprinkle Surf Avenue, west of Coney Island’s amusement zone. The Coney Island Development Corporation — the group designated by the city to oversee the plan — envisions that the introduction of mixed-use housing and retail will bring in new residents and give locals access to year-round jobs.

It all sounds great; If only it the ambitious projects were based on real-life developers with real-life dollars.

Though the rezoning plans were officially approved by the City Council three years ago, little construction has taken place since, with even fewer projects actually completed. Setbacks have included delays in financing and community disagreements, not to mention the collapse of the housing bubble.

Locals want to see the redevelopment plans succeed for reasons beyond the promise of flashy retail and freshly landscaped streets — namely, job creation. Coney Island CLEAR, a coalition of local union leaders and residents, some of whom pledge to represent residents of the the neighborhood’s large public housing development, lobbied for job guarantees for locals as a component of the plan’s rezoning. Yet with little progress since the plans were approved, the residents’ hope for job creation is still just that: a hope.

Though the futures of the slated projects remain unclear, city officials are already thinking about how Coney Island could handle a sudden influx of new residents. Put simply, Coney Island lacks the adequate infrastructure — including stormwater lines and sewage lines — to support the flood of residents expected to arrive once plans for Coney Island’s revitalization make headway. According to the city’s Independent Budget Office, the price tag for repairing Coney Island’s infrastructure would be costly — an estimated $417 million in total.

Earlier this month, New York City Mayor Michael Bloomberg unveiled a $68.5 billion budget for the year 2013. Though Bloomberg has shown commitment toward revitalizing the city’s public recreation spaces and to Coney Island’s redevelopment, it is unclear whether the budget can accommodate the needs of Coney Island’s infrastructure overhaul.

A state away, another stretch of sandy, vacant lots exists: Atlantic City. Though New York City has been trying to remake Coney Island for nearly 10 years, the tale of Atlantic City’s efforts at revival spans decades.

In the 1970s, casinos were introduced to Atlantic City as a means to revitalize a town that had been plagued by poverty and crime since its renaissance earlier in the century. A decade later, the state created the Casino Reinvestment Development Authority (CRDA) as a means to skim the top off the booming casinos’ profits for reinvestment in the still-troubled neighborhoods that surrounded — and still surround — the boardwalk gambling haven.

But as gaming becomes legalized in nearby states, casino profits in Atlantic City continue to erode. Ironically, at the same time as other states legalize gambling with visions of hitting jackpot on an economic development windfall, Atlantic City has seen job numbers decline and crime rates rise. The statistics are sobering: In 2009, Atlantic City’s crime rate was higher than the national violent crime rate average by 388.9 percent.

As recently as this spring, Atlantic City saw a sharp decline in gambling revenue, despite the arrival of Revel casino — a project the state contributed $261 million in tax credits toward for its completion.

Earlier this year, Atlantic City released plans for the transformation of the city’s Tourism District — including the downtown and boardwalk areas. Similar to the plans for Coney Island, included are suggestions for zoning changes, new land-use laws and projects such as the mixed-use development of a 142-acre former municipal airport.

City officials hope the revamping of the district will be a step in the right direction for the city.

On paper, the plans for the new Atlantic City and Coney Island seem promising — and certainly, city officials are betting tax dollars on their success. Whether or nor the dice will fall in their favor? Well, that may just be a question for the crystal ball, that age-old economic forecasting tool of boardwalks worldwide.