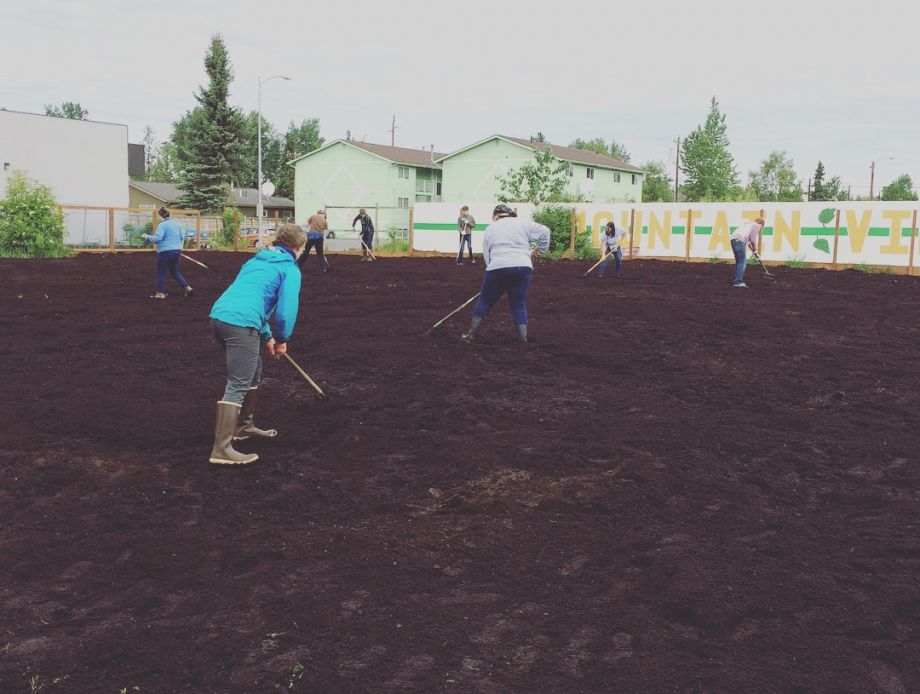 Mahdi Akal is a refugee from Somalia who arrived in Anchorage, Ala., four years ago with his family. The relocation from East Africa to North America was overwhelming, to say the least, from the language to the climate to the culture. But Akal moved into a home across the street from a plot of land that felt familiar — a two-acre lot now being transformed into a farm.

The Akals had a long history of farming in Somalia. Here in Alaska, he found, his family’s skills are paving the way for economic opportunity at the plot across the street.

Akal lives in Mountain View, a neighborhood of northeast Anchorage. The area has suffered from disinvestment and high unemployment, and as a result, transient and short-term tenancy, according to the Anchorage Community Land Trust, which has focused on the area. Mountain View is also considered a “point of entry” for refugees coming into Alaska from places like the Democratic Republic of Congo, Somalia, Cuba, Iran, and Bhutan, due to affordable home prices and proximity to refugee services. Of all incoming refugees to Alaska, says the land trust, over 90 percent live in Mountain View first.

Local organizations working to revitalize the area have made sure to include refugees in the process, providing the framework in which they could build their new lives in Mountain View. These organizations, like the Anchorage Community Land Trust and Catholic Social Services, have found long-term tenancy has increased in Mountain View, which was once ranked the most diverse census tract in America.

One example of revitalization is Grow North Farm, in the plot across from Akal’s home. The land held an RV park before it was acquired by Anchorage Community Land Trust over a decade ago.

“We got the land up to speed, then spent a lot of time listening to what residents wanted, and needed, from the space,” says Emily Cohn, director of communications and development at the land trust.

Three summers ago, Anchorage Community Land Trust opened a seasonal food and craft market on part of the plot, with many stalls operated by refugees. The land trust is now planting the seeds — literally — that will transform the plot into a year-round farm where refugees, working alongside other Mountain View residents, can gain an income, practice English and make community connections.

The market effort was a partnership with Refugee Assistance and Immigration Services of Catholic Social Services, also known as RAIS.

Alaska’s only refugee resettlement agency, RAIS also runs a social enterprise program known as Fresh International Gardens, which provides opportunities for recently-resettled refugees to rebuild their lives by learning small business skills and selling vegetables they grow at local farmers’ markets. Since 2007, 110 gardeners from 11 countries have graduated the program.

“At RAIS, our number one objective is self-sufficiency,” says Issa Spatrisano, incoming program director. “For many of our families, we hear about agriculture skills — many of our clients come from refugee camps, where they may have been running their own market stand for many years. They have innate business skills, and we look for ways to put it into practice.”

RAIS was getting demand for more space to grow and set up market stands from clients of Fresh International Gardens, leading to the partnership with Anchorage Community Land Trust to form Grow North Farms. The organizations held a successful “farm-raiser” earlier this year to support the effort.

Akal’s mother, a farmer in Somalia, participated in the Fresh International Gardens program and sold her produce at the market that preceded Grow North Farm. (She will also plant and sell through Grow North Farm.) Last season, Akal was hired as the market manager; he’s now developing on-the-job training partnerships and expanding job-training programming for RAIS.

“It’s obviously a blessing to have a farm here in Alaska,” Akal says. As market manager, he was integral to ensuring EBT/SNAP benefits could be offered at the market and spread the word to local residents. The effort increased sales at the market by 300 percent, according to Anchorage Community Land Trust.

All the money earned from the garden, market and the occasional pop-up restaurant goes to clients, says Jesse Richardville, the refugee agricultural partnership program coordinator for Catholic Social Services. Over the summer of 2017, 26 clients from seven countries earned more than $13,000 — the program’s largest take yet — while logging approximately 1,660 hours. It works out to a pay rate of about $8 per hour today, almost double what clients used to earn when the program launched.

As farming continues through the summer, vendors sell vegetables and produce at a weekly market still at the site. They’re offering something of a rarity for Alaskans: fresh, locally-grown food. “Around 95 percent of our food in Alaska is imported,” says Richardville. “It’s ever-more important to support local food and grow as much as we can organically, here in the community.”

“We know that if clients have economic stability, and they’re connected to their communities, a lot of the other wellbeing and mental health issues come together,” says Spatrisano. “If they’re economically stable, we see our clients are successful in lots of other ways.”