Closing the Funding Gap for Worker Cooperatives – Next City 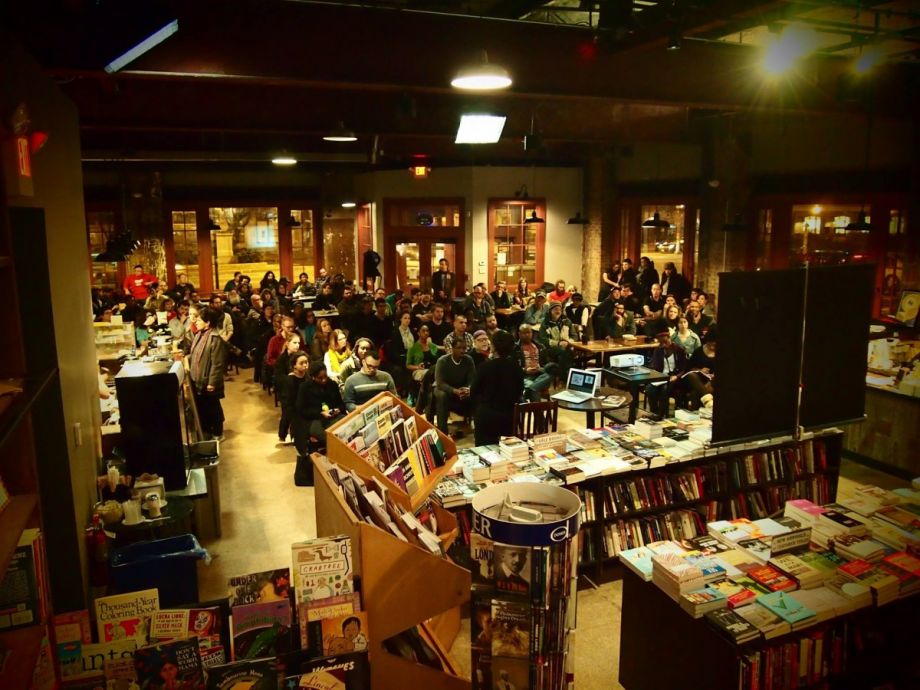 In 2012, Red Emma’s Bookstore Coffeehouse decided it was time to move to another, larger location in Baltimore. Business was good, and growing. They’d seen nearly a decade of modestly positive cash flow. There were twice the number of people working at Red Emma’s since it opened. There could have been more if not for the small space. They needed $200,000 to finance the expansion into a new space.

The only problem, according to lenders? Red Emma’s is a worker cooperative, meaning that each worker-owner has an equal ownership stake in the business, and they also share responsibility for business decisions.

“One of the things that has always been the hardest about financing cooperatives is finding lenders or finding investors that understand the uniqueness of the structure,” says Kate Khatib, one of the seven founding worker-owners of Red Emma’s.

Cities around the country (see Cleveland, Madison, Rochester and NYC) are betting resources on the idea that worker cooperatives can foster a more democratic, inclusive economic future, but the financial system remains stuck in the past.

Red Emma’s approached a lot of local lenders, to no avail, Khatib says. They went to banks where they had relationships as business customers for 10 years, and requested loans for $50,000 or so, hoping to diffuse perceived risk across multiple lenders. Bank staff would suggest why don’t they just take those three or four with the best credit scores and apply for loans individually. That wasn’t an option. “We’re a worker cooperative. It’s all or nothing,” Khatib says. “We’re not going to introduce a kind of hierarchy into our project.”

It was frustrating, but they eventually cobbled together the financing and moved into the new space. The cooperative now has 21 worker-owners and four apprentices. Before the move, they could only support part-time employment, which limited who could be a part of the business. Today, with economies of scale from the larger location, three quarters of them work full-time with a living wage plus healthcare benefits. Half the worker-ownership are now people of color, a big change from before and very intentionally so, Khatib says (they’re also 75 percent women or queer).

“A big the impetus for our move was trying to figure out how to address some of those limitations of who could afford to be involved with the project,” Khatib says. “There are folks at Red Emma’s who have finished college and have graduate degrees, but there are also people who didn’t finish high school and now are business owners.”

The ripples of this particular expansion have gone beyond the newer worker-owners of Red Emma’s, their families, their communities, even beyond Baltimore. This one episode inspired The Working World, which provided a small piece of the financing for Red Emma’s expansion, to come back to Red Emma’s and others to begin developing a shared vision for a national financial cooperative, an ecosystem to support the democratic and worker-led deployment of locally-controlled capital.

“The genesis of this is, as we started getting applications for loans that were at a distance, we realized the only ones we can give it to are the groups that already have all the training they need, and it’s like, well, in what way is that radically inclusive,” says Brendan Martin, executive director of The Working World, a NYC-based nonprofit that specializes in providing capital and technical assistance to worker cooperatives.

In The Working World’s standard lending model, they work super-intimately with clients to guide them through cooperative formation or conversion and operation. As you might imagine, cooperative business is a new concept for many, and it takes time to settle in. The Working World has a huge stake in the success of each cooperative moving forward, because it gets paid back as a percentage of profits. If the cooperative doesn’t make a profit that month, The Working World doesn’t get paid. They call it “non-extractive finance,” and it makes the high-touch support essential to The Working World’s long-term sustainability. Red Emma’s was a rare example of a cooperative that didn’t need that much training, Martin says.

“If [Red Emma’s] is good enough to not need training, that means they also could be good enough to give training. So when the application came in from Taharka Brothers, we were like why don’t we connect them to Kate and Red Emma’s, who have all this experience, and they can bring that to bear, and that’s exactly what happened,” Martin says. Taharka Brothers is a black youth-owned, worker cooperative ice cream chain in Baltimore.

The whole thing is being built on the fly.

The membership of the financial cooperative consists of local organizations committed to incubating and providing technical assistance to worker cooperatives, just as The Working World has done for its borrower cooperatives primarily in NYC. In Baltimore, Red Emma’s got together with a few other cooperatives in the city to create the Baltimore Roundtable for Economic Democracy, or BRED. Other founding members (so far) include the Southern Reparations Loan Fund and the LA Co-Op Lab.

“BRED is basically a network table, it brings together worker-owners from the big cooperatives in Baltimore, one person from DAWN, which is the Democracy at Work Network, and then we have a couple solidarity economy lawyers who are involved, because obviously legal counsel is really useful at this particular moment in building cooperatives,” Khatib explains.

Member organizations go through an apprenticeship phase, in which they get a small allocation of capital from the central pool, up to $50,000 in the current vision of the financial cooperative. The local organization’s first loan must have joint approval from the local group’s credit committee and the financial cooperative’s national solvency committee, which will be elected annually from the membership.

As the loans get paid back, the local groups get full control of the capital to reinvest as they see fit, without needing to go up to the national level for approval. The financial cooperative has even agreed to match initial loan repayments dollar for dollar as they come in. So when BRED receives that first repayment of around a thousand dollars, it instantly becomes two thousand dollars that they can hold onto or re-lend to someone immediately. Each local group will make loans using the same model as The Working World — so they only get paid back when cooperatives do well enough to earn a profit.

“The principles of non-extractive lending, of democratic finance, are at the heart of what we’re trying to do,” says Khatib.

Meanwhile, the financial cooperative raises capital centrally for the entire membership. Raising capital as a group is more efficient than as individual loan funds, city-by-city. In the future, hypothetically, if there were five local cooperative incubators operating independently of each other in different cities and they each had a million dollar fund, it would be very difficult to find an investor to make a $500,000 investment in just one of the million-dollar loan funds.

“It’s not diversified, so there’s a lot of risk,” Khatib explains. “Our theory is that if we can have these five funds or 10 funds or 15 funds all across the country, that are working locally, working regionally but are aggregating their needs for debt capital and for grant capital, then we’re able to go after much larger investments, we’re able to go after institutional investments.”

If things are going smoothly, then chances are most of each local group’s loan fund is out circulating in the community. If a loan application for $200,000 comes in, and they don’t have that on hand but they want to make the loan, then the local cooperative incubator could appeal to the financial cooperative’s central pool for additional lending capital.

“We hope that local groups, once they do a couple of trial loans of $10,000 or $15,000, they might come back and do larger loans. We want to encourage that,” says Martin, who re-emphasizes that when the larger loans get paid back, that capital also remains under local control.

Each group will eventually have the flexibility to make loans to other kinds of organizations, such as community land trusts or nonprofit real estate developers, so long as the project fits in with the principles of radical inclusiveness and democratic control. The financial cooperative will also annually elect a values committee that will provide oversight to ensure adherence to the principles.

“The more local, the more relationship-based, people-based that finance and capital can be, the more subordinate to people, the more it can be in service to communities,” Martin says.

“The idea is that over time what will happen is that The Working World will become a regional peer the same way that BRED is a regional peer within the national financial cooperative, DC will have a peer organization, and so on,” says Khatib. “I really think that’s going to help us to find ways to access some of the capital that is even right here in Baltimore, but has always been denied to our kinds of businesses.”