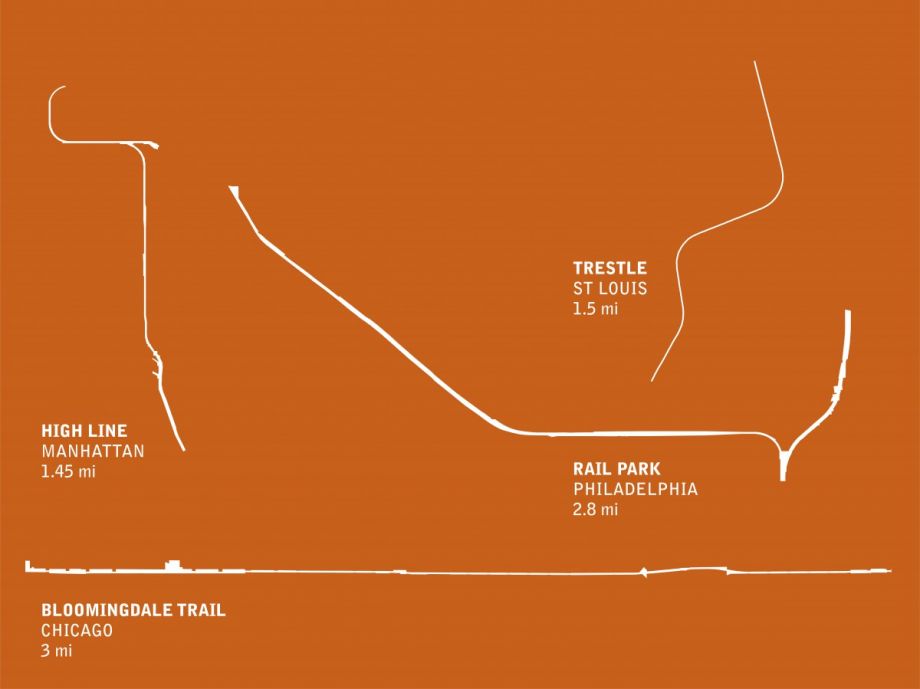 Hosted by Next City and The Academy of Natural Sciences, “From Tracks to Parks: The Next Generation of Urban Green” featured four urban rails-to-trails projects in various stages of realization, represented here at the same scale for comparison.

“This is a very exciting time to be working and living in cities. There’s a lot of innovation, repurposing of our built environment. It’s not surprising that cities have also discovered that it’s really important to provide parks, trails and public spaces — and city leaders are recognizing that parks are good for their economies. They’re no longer just a nice thing to have but a must,” opened Beth White, moderator of the panel and The Trust for Public Land’s Chicago Region Director.

Through presentation, moderated discussion and audience Q&A, representatives of Chicago’s Bloomingdale Trail, New York’s High Line, Philadelphia’s Reading Viaduct and City Branch, and St. Louis’ Trestle answered the question we at Next City posed: how do we adapt the aging infrastructure of our industrial past to create parks for future?

Panelists discussed the importance of leadership and the role of elected officials in realizing these projects (Mayor Emanuel pledged completion of The Bloomingdale Trail within his first term); compared notes on negotiating conflicting interests and aspirations; and touched on the challenge of designing a public space that simultaneously serves the local community, attracts tourists, and inspires funders. Though the local context makes for distinct differences, there are common factors integral to the success of “tracks to parks” projects across the country — a commitment to collaboration and public engagement at the top of the list — and similar hurdles and road blocks.

The story continues in the slideshow below — scroll down for photos, a video of the entire event, and a Storify of live-tweets. For the in-depth story on the Bloomingdale Trail, check out Next City’s recent Forefront story here.

Watch a video of the entire panel

Flip through a Storify of live-tweets

Next City is grateful to OLIN and the William Penn Foundation for their generous support, The Academy of Natural Sciences of Drexel University for hosting an inspiring event, our moderator Beth White, Chicago Region Director of The Trust for Public Land for leading an engaging and inspiring discussion, and to the panelists for joining us in Philadelphia to share their story. Learn more about the moderator and panelists, and keep tabs on these projects as they move forward by following the links below: