Rebuilding the Neighborhood Without Leaving Out Neighbors 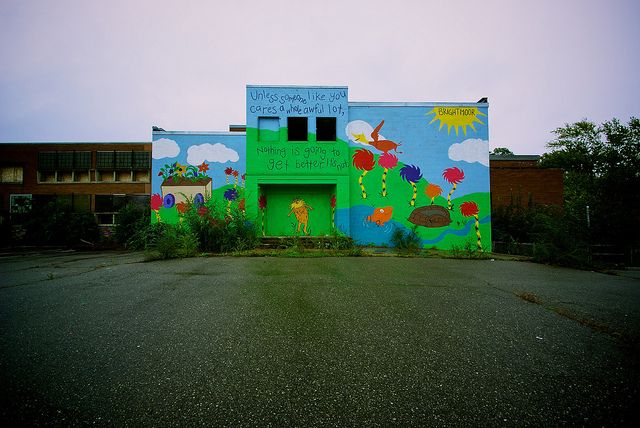 The following is a dispatch from the 2013 Bruner Loeb Forum, now ongoing in Detroit

It’s easy to cast Brightmoor, one of the youngest of Detroit’s oldest neighborhoods and filled with empty, clapboard bungalows, into the abyss as the rest of the city struggles to rebuild itself. But strong grassroots activism, coupled with resources from local task forces, are helping to establish a future here.

City officials and residents alike envision demolishing rundown homes, many of which are marked with blue plywood that covers doors and windows, and creating green space used for parks, urban foresting or farming. The trick, however, is to do so while respecting longtime neighbors who have stuck with Brightmoor since the beginning.

Brightmoor, a section of Detroit’s Cody-Rouge area, is anchored by a 55-year-old community center across the street from an elementary school. Programs at both places speak to the ways these institutions serve the neighborhood: The school serves locally grown food for lunch while, among other things, seniors convene at the community center for meals.

A storm of economic decline, neglectful land use and ineffective long-term housing has left much of Brightmoor blighted, but the turnaround in place lies largely in the hands of not only residents but also Detroit Future City, a “strategic framework” group that acts as a middleman between residents, private organizations, businesses and the city.

“There’s a plan for everybody in the city that doesn’t look the same,” says Kirk Mayes, executive director of the Brightmoor Alliance. That could mean blue-green infrastructure in some areas and, in others, simply improving what’s already there.

Detroit Future City establishes steering committees made up of residents, and takes their input back to the city to best initiate a plan going forward. Such back-and-forth meetings can take between six and nine months. Ideas produced therein must also align with the city’s Master Plan, outlined by outgoing Mayor Dave Bing and a team of urban planners and other city executives.

“This is really a process,” says Sarida Scott, executive director of Community Development Advocates of Detroit. “You have to imagine it. Your neighborhood may not look the same as it did 20 years ago.”

The city’s bankruptcy has not slowed down Detroit Future City or the revitalization of Brightmoor and other neighborhoods, but observers acknowledge much of this its future will hinge on outside investment from businesses before potential newcomers consider taking up residency.

But it’s clear that existing residents will not be left out. “The lifestyle of things that people want to see that grow into policy recommendations that go into the master plan,” Scott says.