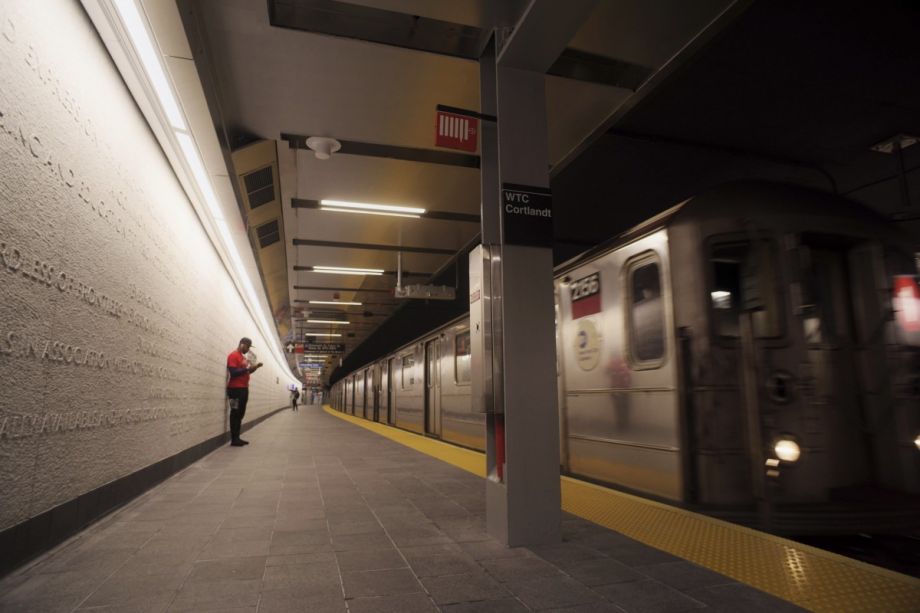 A downtown 1 train pulls into the newly-opened WTC Cortlandt subway station in New York on Saturday evening, Sept. 8, 2018. The old Cortlandt Street station on the subway system's No. 1 line was buried under the rubble of the World Trade Center's twin towers on Sept. 11, 2001. Construction of the new station was delayed until the rebuilding of the surrounding towers was well under way. (AP Photo/Patrick Sison)

Just in time for the 17th anniversary of the attack that destroyed it, the New York subway station directly beneath the Twin Towers reopened for service Sept. 8.

Known then simply as Cortlandt Street, the new station is named WTC Cortlandt to commemorate the site and connect the station to its restoration.

The new station, which was constructed in a shell finished for the purpose when the MTA rebuilt the No. 1 subway line tunnel that passes through it, is decorated with passages from the Declaration of Independence and other celebrated documents that, when read vertically, reveal words emphasizing human rights and dignity.

The New York Times reported on the artwork when station reconstruction began in 2015. Its report on the reopening itself included some commentary on how infrastructure projects in New York can get hamstrung by the demands of multiple overlapping agencies. Even though the MTA reopened the subway tunnel in fairly short order, it could not begin rebuilding the station itself until the Port Authority of New York and New Jersey, which owns the World Trade Center, finished work around the station site in 2015.

The metro systems in the Chinese cities of Shanghai and Suzhou will become one sometime around the start of 2024, when a new 41.3-kilometer (25.7-mile) subway line connecting the two opens.

Metro Report International reports that China’s National Development and Reform Commission gave the go-ahead for the line’s construction Sept. 6, after the city of Suzhou signed off on it Aug. 28. The line, dubbed Line S1, will have 28 stations, five of them interchanges, all of them underground. It will run from the eastern end of Suzhou’s under-construction Line 3 at Weiting southeast to the western terminus of Line 11 of the Shanghai metro at Huaqiao.

Construction will begin late this year, with a projected completion date of late 2023 or early 2024. The project’s total estimated cost is 27.4 billion yuan (US$3.99 billion).

Railway Track & Structures reports that officials in the city of Ottawa say they won’t be able to open the new Confederation Line light rail route on Nov. 30 as originally scheduled. At a Nov. 10 meeting of the city’s Finance and Economic Development Committee, staff announced that the line will most likely open in early 2019.

The delay comes at the request of the Rideau Transit Group, which is building the line. The company asked for carveouts in the agreement that called for the Nov. 30 completion date. The largest one concerns the underground Rideau Station, near the line’s midpoint. City staff told the committee that the station still needed significant construction and mechanical work.

Work on the rest of the 7.7-mile, 13-station light rail line is progressing as planned, according to the report. The delay will also allow for operational testing of the entire route.