Reborn from a Trash Heap, With Women at the Helm – Next City

Reborn from a Trash Heap, With Women at the Helm 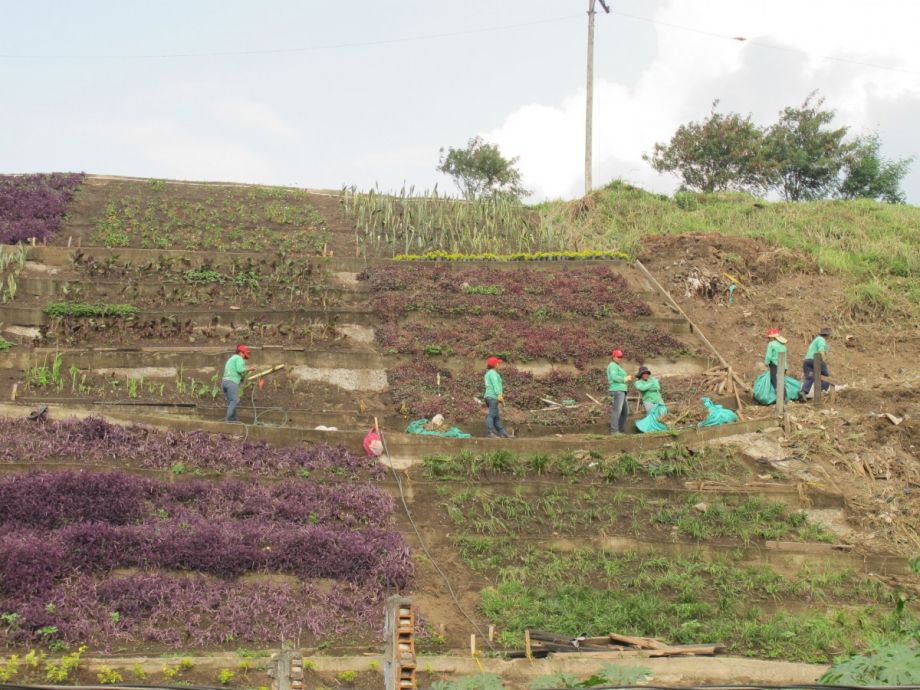 The former trash heap known as El Morro, which is now a community garden.

“I lost my husband and all three brothers to the violence, but this is my neighborhood and I refused to leave,” says Gloria Elena Ospina, a decades-long resident of Moravia.

It’s a statement that sums up the pain and perseverance that color this impoverished neighborhood in north-central Medellin – the most densely populated slice of land in Colombia – where the people have battled years of violence to turn a mountain of literal garbage into one of the most dynamic zones in the city.

Beginning in 1977, Moravia became Medellin’s rubbish dump. The city’s trash was carted and left here – thousands of tons of it every year. “All this was just flat land, originally intended for an extension of Parque Norte (an adjacent amusement park),” says Juan Cano, a community organizer and youth worker who is privately contracted by the mayor’s office to support community organizations in Moravia. “But then the city needed to deposit its rubbish somewhere, and this became the place until a more permanent arrangement could be made.”

The use of the area as a municipal disposal point also brought with it a rush of trash prospectors, known as basureros, who sift through the debris to pick out anything that could be recycled, sold, or salvaged. With its abundance of informal employment, Moravia became a mecca for the scores of displaced people arriving in the city to escape rural violence, and the basureros built their homes from the materials they found around them.

By the time the city’s waste was redirected elsewhere in 1984, this sector of Moravia, known as “El Morro,” was a huge mountain of rubbish rising from the middle of the neighborhood. At its peak, El Morro was home to up to 17,000 people living in 1,800 dwellings. Today, as a result of a government relocation scheme, there are just 145 homes left on or around the trash mound, as the last remaining residents negotiate the terms of their departure. The decades of refuse make the ground unfit for cultivating consumables or rearing animals to eat, but people still do it. Though the mound remains, it now hosts a community gardening initiative, training 35 local residents to cultivate and tend plants. While nothing can be grown to eat on the mound, the flora masks the vast pile of debris. Meanwhile, workers pick up a livable salary slightly over minimum wage while gaining transferable skills, with four former participants now working at the nearby Medellin Botanical Garden.

Many of those who were relocated moved to high-rises way out on the city’s northwest fringes, just barely visible from the top of the El Morro mound. But others remained in this neighborhood, which totals 50,000 people, and have helped institute a transformation that is ongoing today.

Moravia is not crime-free, but it’s come a long way from the bloodshed of previous decades, when successions of non-state armed actors – street gangs, the Medellin Cartel, guerrilla militias and paramilitaries – competed for control, with many residents caught in the crossfire. Today a single armed group controls the neighborhood, something many residents say contributes to the current stability. But a web of community organizations has battled through decades of persecution to implement social programs that are key stabilizers, with women famously taking a central role.

“In 1999, we formed a group called Promotores de Desarollo de Moravia (Promoters for Moravia’s Development). There were 70 of us, more than half women. Around 10 have been assassinated since then,” says Judy Elena Echavarria, a long-term resident and community leader who, along with the other leaders in the group, was elected by a popular vote by the sector of the neighborhood where she lives. “We wanted to change the image of Moravia because there had been too much violence.”

According to Echevarria, the group was fortunate to encounter a city mayor receptive to their request for assistance in actioning the plans they developed, with assistance also coming from the National University in Medellin. The group also engaged in an unsavory but necessary process of negotiation with the illegal armed actors of the time, in order to allow them to focus on social development in the community. “I stayed away from that,” says Echeverria, “but we pushed for an agreement that we would dedicate ourselves to social work and would not touch on security.” While the deaths among the group are testament to the difficulties inherent in that process, the perseverance and determination of community leaders bore fruit.

Much of the infrastructure found in Moravia today was suggested by the group and came following the election of Mayor Sergio Fajardo, a pioneer of social urbanism who took power in December 2003. While Fajardo did not oversee many of the plans, his proactive approach to social connectivity catalyzed their implementation.

Until recently, Moravia was rife with violence and crime. Today, its public spaces have been transformed.

Of the programs and facilities suggested by the group, the jewel in the crown is arguably the six-year-old Moravia Cultural Development Center, a multi-purpose facility serving the 15 neighborhoods, including Moravia, that make up the district of Aranjuez. The center, designed by award-winning Colombian architect Rogelio Salmona, provides free educational and cultural programs for Aranjuez residents, as well as a space for community events. The courses are so popular that staff members at the center say people will wait all night before registration day to book themselves a place, and the effects are palpable.

“Before a lot of young people were getting involved in delinquency,” says Jhonatan Andres Viveros, a 17-year-old participant in several of the programs who says that, while youth delinquency has not ended, many who found themselves involved in it through boredom or social pressure now have an escape route. “This center has changed a lot, now there are more opportunities.”

As well as the center, Moravia boasts a range of other facilities, including venues for community education schemes, paved roads and two kindergartens, the first of which was named after Maria Lucila “Mama Chila” Perez, a 78-year-old resident and community leader who is proud of the transformation she has helped enact during 49 years in the neighborhood.

“It was a disaster,” she says of Moravia in the early decades. “There was every kind of delinquent here robbing and killing…They killed one of my sons during the time of Pablo Escobar.”

According to Perez, the troubled and disparate histories of the many displaced people who came to form the community provided the endurance to reach the point the community is at today.

“We are more organized and we have adults and children coming together,” she says. “We still have a lot more to do, but we have achieved so much.”

Like Perez, many of the women who strove through the most difficult times continue to be active in the community, and the legend of Moravia’s women as agents of change is spoken of throughout the city.

“Women have always been key to the changes here in Moravia – cultural, educational and environmental – because there has always been a lot of female heads of families,” says community leader Orley Mazo, who runs a scheme teaching artisanal and practical uses for recycled goods, among other things. “They (women) put themselves in the middle of the changes and they made many of them happen.”

The heavy concentration of female-headed families owes itself in large part to the heritage of the community, with men more often those killed as part of the violence that displaced people and drove them to the neighborhood. It was also an experience that gave women the desire to invest in the future by educating themselves.

“We are the ones who felt the pain,” says Mama Chila Perez. “But we studied and studied and we committed ourselves to improve.”