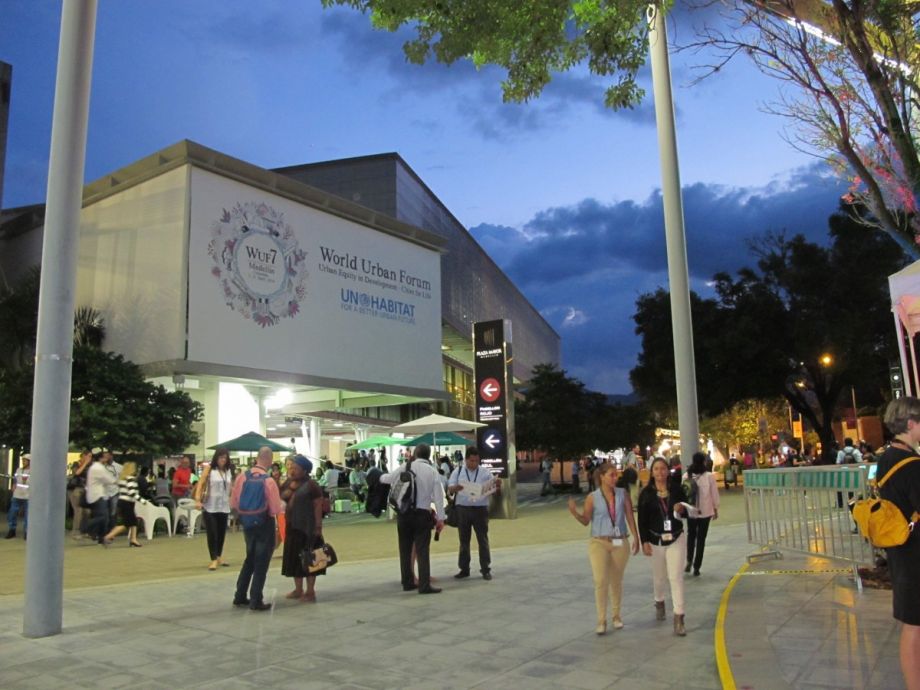 It’s hard to imagine the World Urban Forum being held in Medellín even just a few years ago.

Medellín Mayor Aníbal Gaviria called it “the biggest event in the history of Medellín,” and indeed, the buzz was palpable as the World Urban Forum kicked off on April 7 after months of anticipation in the city. With over 20,000 registered visitors from 164 countries, Medellín’s hotel capacity hit 100 percent. The event, like the city itself, has truly come into its own.

Colombian President Juan Manuel Santos appeared at the inauguration alongside Gaviria, Antioquia Governor Sergio Fajardo and Dr. Joan Clos, executive director of UN Habitat. Santos placed the forum alongside the year’s other “world-class” event – the Soccer World Cup kicking off in Brazil in June – saying, “While Brazil will host the best teams and players in the world, we are assuming another challenge just as exciting and urgent.”

That challenge, according to Santos, is to promote economic competitiveness, while still working to meet the needs of the people and protect the environment.

Pride in hosting the seventh edition of this biannual showcase – just the second time it has come to Latin America – has been reinforced by an extensive media buildup, with the forum’s arrival seen by many as the latest mark of the city’s celebrated process of transformation.

“This Urban Forum allows us to show the world what we have achieved in this city,” said Jorge Tobon, customer services manager for Metro de Medellín, the city’s publicly funded transport provider. “It has passed through some very difficult years with a lot of violence, when communities were detached, not cohesive. But through work that has focused on the people we have come out of that most difficult time, to a period of looking to the future, of hope.”

A gondola from the city’s famous airborne transit system at the World Urban Forum.

Medellín’s social and cultural initiatives in recent years have been the subject of much global fanfare. In March 2013 the city was anointed Innovative City of the Year, with projects such as the city’s gondola transit system, its participatory budgeting and its placement of amenities and architecture in its poorest neighborhoods making it the focus of much attention from media, city planners and social scientists across the globe.

The pioneering schemes pursued to promote inclusion, mobility and security, as well as the recognition they have received, have created a widespread sense of Medellín’s place on the global stage, summed up by Santos in his inauguration speech: “We have all the willingness to listen and learn from global experiences and much to share with the world.”

The event itself is based in Medellín’s principal event center, Plaza Mayor, with a vast and eclectic array of stalls representing NGOs, universities, local and national government entities, and diverse overseas country, province and city delegations.

One memorable stall is that of Metro de Medellín, with a full-scale model of one of the city’s gondolas to sit in, as well as free week-long travel passes on offer to the public. Other highlights include an indigenous longhouse situated immediately inside the entrance, a large cinema showing films and documentaries from around the world, various walk-through and interactive displays, and a food court with some of Medellín’s most popular eateries selling their products at regular menu prices.

Yet the forum is not restricted to Plaza Mayor. Participants are set to engage in a number of excursions throughout the city – some staged the weekend prior to the event’s official opening – including visits to the outdoor escalators that have opened up access to some of the city’s most impoverished sectors on its steep hillsides, and Moravia, a neighborhood originally built around a garbage pile that has become one of the city’s flagship examples of urban renewal.

But beneath the buzz of the forum lay some pressing local and global issues. Speaking at the opening ceremony Dr. Joan Clos warned of the problems of inadequate opportunities for impoverished youth when urbanization is too rapid or unplanned. And with Medellín’s metropolitan population more than tripling over the last 50 years and still growing quickly, inequality is a grave problem, while the clash between development projects and the immediate needs of the poorest citizens has caused community unrest over schemes like the city’s green belt project.

In fact, the event itself has its critics, with one of the city’s most prominent human rights defenders, Luis Fernando Quijano, adopting the Twitter name #NoEsMiForoUrbano (“It’s Not My Urban Forum”). Meanwhile, a parallel “Alternative Popular Social Urban Forum” is being held elsewhere in the city by grassroots organizations.

For those in opposition, the “miracle” of Medellín is a sham, with violence and pressing social issues that continue to plague the city being glossed over by PR-friendly public-works projects.

Yet despite these voices of dissent, it is impossible to deny Medellín’s resurgence since its days as the drug-ravaged violence capital of the world in the early 1990s. Today, the very fact that the city is capable of hosting such a large-scale international event is a mark of that progress. Just a few years ago, none of this would have been possible.