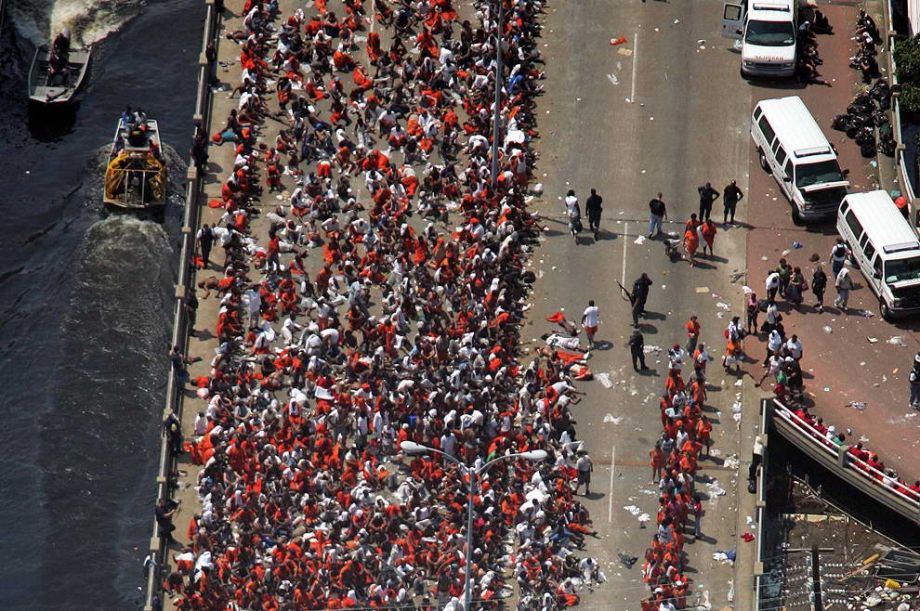 New Orleans is perhaps the most incarcerated place on the planet. No country imprisons more of its population than the United States, no U.S. state imprisons more than Louisiana, and no Louisiana city imprisons more than New Orleans. The statewide prison system is a $182 million-a-year industry that must be constantly supplied with a steady stream of bodies. It relies on a criminal justice system rife with corruption and inequity, and overwhelmingly afflicts African-American men, with one in every 14 behind bars and one in every seven either in prison, on parole, or on probation. The consequences of this epidemic not only devastate the lives of countless individuals, but also fray the social and economic fabric required of a strong, resilient city.

Disasters expose cities’ weaknesses and exacerbate existing inequalities. Among the most harrowing stories that emerged in the aftermath of Hurricane Katrina were those of the 150 young men and women housed in youth detention facilities at the time. They were moved to Orleans Parish Prison before the storm reached land, stranded there for several days after the floodwaters rose and spent several days more sitting with adult inmates on an exposed urban overpass under the surveillance of guards threatening to kill any transgressor. A report issued afterward by the Juvenile Justice Project of Louisiana (JJPL), “Treated Like Trash: Juvenile Detention Before, During, and After Hurricane Katrina,” points out that the inept handling of these teenagers’ evacuation was indicative of the way the city treats young offenders, and of its juvenile justice system as a whole, which many experts considered the worst in the nation.

But juvenile justice reform advocates found opportunity as the rebuilding process began, says Dana Kaplan, executive director of the JJPL. The botched evacuation brought notoriety and shame to New Orleans and compelled the local government to respond to civic engagement on the issue. By the end of 2006, reform advocates who had been working for years with little progress, with the help of the Annie E. Casey Foundation, successfully encouraged New Orleans to adopt the Juvenile Detention Alternatives Initiative. Since then, the city’s juvenile justice system has moved increasingly toward imprisonment alternatives, reduced the number of youth in detention and standardized court methods to determine which youth are appropriate for detention. The first nonprofit in the nation dedicated to providing public defense for youth, the Louisiana Center for Children’s Rights, began operation in 2006 and dramatically improved the quality of representation child defendants receive. Finally, in 2014, the city will break ground on a new youth detention facility that will provide young inmates a range of programming and rehabilitation opportunities, the likes of which New Orleans has never offered.

Kaplan says she has seen attitudes toward juvenile justice distinctly shift since advocates gained traction after the storm, with citizens and officials both advocating for alternatives to detention whenever possible. But in many cases, funding has yet to follow. A plethora of community-based alternatives to detention could be implemented that cost far less in the long run than jailing children, but budget cuts at the city and state level make it hard to find front-end money to fund their startup.

The way in which a juvenile offender is treated can reverberate throughout his or her entire life. But more and more often, any person convicted of a crime receives a life sentence of sorts, shackled to a criminal record that can prevent that person from securing employment or housing, receiving public assistance, attending college, or raising children — many of the things that make a person a normal citizen. While the justice system is predicated on finite sentences, people convicted of even nonviolent offenses end up dogged by criminal records that last long after they have paid their debt to society.

Criminal records were created as tools of the court, says Adrienne Wheeler, director of law and policy at the Justice and Accountability Center of Louisiana (JAC). But America’s post-9/11 focus on security and the proliferation of Internet technology have created a climate in which entities far outside the criminal justice system have access to criminal records — and they use them a lot. According to a survey by the National Employment Law Project, more than 90 percent of employers use criminal background checks to screen applicants, many with policies in place that forbid hiring anyone convicted of a felony or misdemeanor.

“There’s a distinction between punishment for a ‘bad act’ and a complete condemnation of a person’s character,” says Wheeler. “There’s an assumption that a ‘criminal’ is a bad person, but these records were never meant to be used as an indication of someone’s character.”

The unemployment rate among American-American men in New Orleans is more than 50 percent, an inexcusable statistic influenced in part by incarceration rates and their wide reverberations. The JAC provides public expungement clinics that help people navigate the wildly convoluted process of removing criminal records from public access, giving them a better chance of advancing through application processes.

Not unlike the shift Kaplan notices in attitudes toward juvenile justice, JAC executive director Ameca Reali says people are beginning to accept that hyper-incarceration damages the city as a whole. In December, New Orleans Mayor Mitch Landrieu announced the city government would “ban the box,” removing the section on applications for city employment that ask about criminal convictions. (The city will still consider criminal backgrounds, but later in the application process, after applicants’ merits have been considered).

“Past mistakes should not be a permanent barrier for people who want to earn an honest living and contribute positively to our city,” Landrieu said in a statement.

Wheeler says she keeps in mind a quote from Audre Lorde while conducting her work: “There is no such thing as a single-issue struggle because we do not live single-issue lives.” The most important shift of all in the post-Katrina landscape might be people’s recognition that criminal justice issues are not relegated to the realm of “criminals,” but rather impact society as a whole. Citizen groups, legal and otherwise, are working together with this understanding, and government officials are beginning to listen, moving forward incrementally on what will undoubtedly be a long, grueling slog toward making New Orleans a more resilient city.