Ramp to Nowhere – Next City 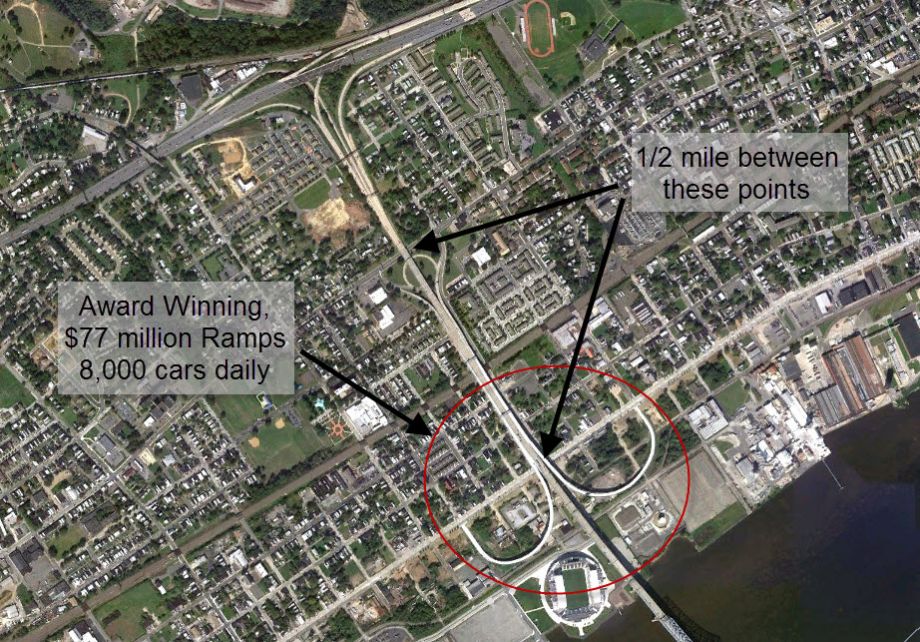 The strip of highway connecting I-95 to the Commodore Barry Bridge, Route 322, spans the width of Chester like a bridge itself, shadowing Flower Street below it and allowing commuters from either side of the Delaware River to divert the city entirely.

But with the addition of PPL Park, a national league soccer stadium, and Harrah’s Casino to Chester’s waterfront, the Pennsylvania Department of Transportation (PennDot) and Delaware Valley Regional Planning Commission have designated $77 million to the construction of entrance and exit ramps with direct access to Route 291, an industrial highway that runs parallel to the river.

PennDot officials and politicians have lauded the interchange as key to the revitalization of Chester’s waterfront. “In 36 to 60 months, we will see an explosion of economic development on Route 291,” said Pennsylvania representative Dominic Pileggi.

In a statement issued to the press, PennDot District Executive Lester C. Toaso bragged that the new ramps will help “motorists now will find it quicker and easier to go between the waterfront and the interstate since they no longer have to weave their way on city streets to travel between I-95 and 2nd Street.”

Yet the necessity of the ramps has also been disputed.

Dennis R. Winters, who served as a consultant on the project as a member of the Regional Citizens Committee, says that among Chester residents, there is a strong sense that the ramps are “purely for the benefit of the stadium and casino” and their visitors.

Another observer, Charles Marohn, an engineer and blogger for Strongtowns, considers the interchange a redundancy, and an expensive one at that.

This is fantasy. A very expensive gimmick that is not only wasting a lot of money, but is diverting the energies, hopes and dreams of a city of 34,000 — a city that lost 8 percent of its population over the last decade — from things that could actually help them become a strong town…These ramps represent an investment of $9,060 for a Chester family of four. For a city with a 12 percent reported rate of unemployment, how many real jobs could be created if $77 million were put into an economic gardening program? This is an unconscionable expenditure.

Marohn goes onto point out that one half-mile further from the waterfront there is an off ramp connected to Route 13, which also links up with 291 after just a few turns. Although Marohn does not deny that the new ramps are more convenient, he finds fault with spending $77 million — 80 percent of which was federally funded — on new construction when Pennsylvania has the largest percentage — 26.5 percent — of structurally deficient bridges in the country. Two of the state’s busiest structurally deficient bridges are in the Philadelphia metropolitan area, according to a recent report from Transportation for America.

Andrea Kiepe is an regional organizer for the nonprofit transportation advocacy group. She agrees that the money would be better spent supporting aging existing infrastructure. “The emphasis should be on maintaining the road and bridge network we already have, especially in a state like PA where your road network is so vast,” she said.

Less obvious is how to sell maintaining the unsexy old stuff at a time when cities like Chester are desperate for any sign of progress, whether it be a shiny new arena, or a highway exit allowing easy passage in, and out, of town.