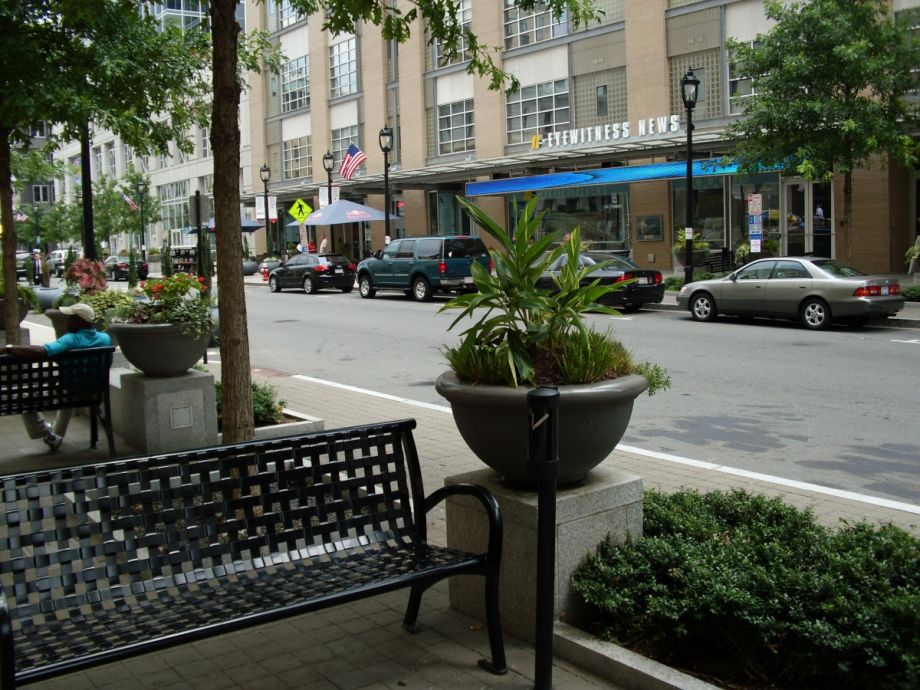 Over the next few weeks, the Grassroutes Column will visit a number of southern cities and cover their regeneration in a series called “New Directions for the Old South.” This is the first piece in what will be a multi-part feature.

Downtown Raleigh used to be a real nine-to-five place, the sort of American inner-city that managed to attract a fine lunch crowd but a much smaller group for dinner, and an even tighter circle for anything after that. Like the central business districts of many state capitals, North Carolina’s was plagued by its almost overwhelming reliance on office workers, its few residents, and its decided lack of street life.

Part of the problem, it seemed, was the presence of a pedestrian mall at the center of the city on Fayetteville Street. Much as in other U.S. cities, Raleigh planners had assumed that moving cars off the city’s main drag would improve quality of life and expand business, but the result was unfortunately frequently the opposite. By the early 2000s, the Fayetteville Street Mall was downright dour at night.

The city’s Urban Design Center (UDC), a division of its planning department, decided to attempt to undo the damage by bringing cars back in and opening up the perspective between the old State Capitol and the performing arts center, two beautiful buildings that sit at opposite ends of the street and which had been divided by a convention center built when the mall was created. A formerly pedestrian-only space would once again be shared with automobiles.

Four years later, the new street has become a wild success, at least considering the number of people I noticed using it day and night. There are many pedestrians at all times of the day, both walking and sitting, enjoying what is clearly a well-designed space. The reconstruction required the complete refashioning of the street, including new sidewalks, improved benches, and rethought landscaping.

“Pedestrian traffic has really picked up,” Dan Douglas told me. Douglas, now in the private sector, was formerly the director of the UDC and headed the redevelopment project. “There are now 22 food places; in 2005, I think there were five,” he said. While there had once been an 80% vacancy rate on the city’s prime thoroughfare, there is now some kind of business in virtually every storefront. The city’s public investment has, by some counts, been followed by six times more in private spending.

Yet before the city dropped nine million dollars on the project, it was contested by some locals, who suggested that it would bring noise and congestion into what was a quiet place; others said no amount of public money could bring stores and restaurants into the abandoned central city.

But Fayetteville Street is now arguably a national model for how a former pedestrian mall can be reconditioned into an active and useful street.

Grant Meacci, now the UDC’s director, is convinced by the value of a transformation. “It’s one place,” he said, “that is more recognizable than any other street in the city.” His colleague at the UDC, planner Elizabeth Alley, agrees. “Even folks that don’t live downtown, they come downtown,” she said. And that’s not to be taken for granted in a sprawling southern metropolis. “The big thing is that it proves Raleigh can be an urban place.” The street’s new look is good enough to make it a big attractor for people throughout the region.

There may be some reasonable explanations for why Fayetteville Street has been so thoroughly transformed after it was opened to automobile traffic. For one, bringing automobiles in made the spaces between blocks feel safer at all times of the day; the calm of the carless environment had its ill effects, since it sometimes seemed too empty. Second, the UDC chose to prioritize high-quality materials to ensure that the environment is good-looking for everyone. Third, its reconstruction coincided with a general renewal of interest in Raleigh’s downtown, meaning that the space’s reopening was well-timed for investors who wanted to open new restaurants and more for an increasingly urban clientele.

Alley says that many national property investors are looking into buying land adjacent to the street. When the UDC was working with the developers of a new Marriott hotel, “they told us they had to have a Fayetteville Street address,” she said. Two thousand residents have moved into the nearby area since 2002.

But perhaps most important may have been the intense effort by the UDC to retain many of the positive aspects of the pedestrian mall in the newly car-trafficked corridor. “This is the smallest street we could make,” said Douglas. 60% of space is reserved for pedestrians, an approach the former UDC director calls a “hybrid approach: half-mall, half-street.”

“The beauty of it is that because it was a mall before, you can shut it down,” Douglas argued. “It’s the best of both worlds.” During the typical workday, cars move slowly up and down the corridor, while pedestrians luxuriate in the generous sidewalks. During special events, the whole street can be converted to close off cars — and that doesn’t disturb the overall traffic patterns much downtown. Parades, once impossible on the mall because of plants that filled the gaps between buildings, are now welcome down North Carolina’s most prestigious street.

Overall, it’s a quick turnaround for a place that was too empty to enjoy less than half a decade ago. It shows that, at least in some cases, there are benefits to reconverting pedestrian malls into spaces that look and act more like typical streets.

In the upcoming second part of this article, I’ll describe how the city incorporated changes in its zoning and parking practices to encourage the active use of Fayetteville Street. Disclaimer: During the summer of 2005, I worked as an unpaid intern at the Raleigh Urban Design Center.