Raleigh Program Helps These Entrepreneurs Beat the System – Next City 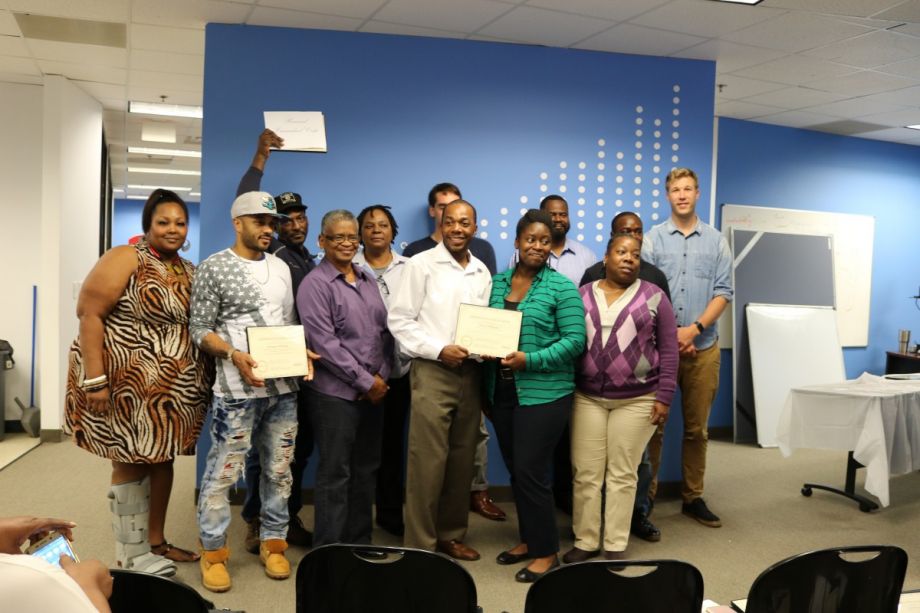 Three months after graduating from an entrepreneurship course, La’Kia Young is working on starting an online boutique. She has associate’s and bachelor’s degrees in business Wake Technical Community College and North Carolina Wesleyan College, respectively.

But Young has something else that many entrepreneurs don’t: a criminal record.

In October 2017, Young was one of 13 people to graduate from an eight-week business course from Inmates to Entrepreneurs (I2E), a not-for-profit community outreach program that helps people who have been incarcerated start their own businesses.

While there are some companies that actively hire people with criminal histories, they are the exception to the rule. According to research funded by the National Institute of Justice, many employers are reluctant to hire applicants with criminal records. About 60 to 75 percent of people who were incarcerated are unemployed up to a year after they’re released from prison. The I2E program aims to act as a solution for that injustice by teaching entrepreneurship.

The students are people like Young, who plans to sell plus-size lingerie online. She has a business plan and is planning to launch the store before 2018 is over.

“If I would put anything into words, I would say school gave me the book smarts and that course gave me the life experience,” Young says.

The free course is taught by entrepreneurs in the Raleigh area. Young says she appreciated learning from people who were successfully running their businesses and learning about what their day to day challenges and successes look like.

“That was actually the better part of learning about what entrepreneurship was about, because the books don’t teach you about a day where something goes wrong,” Young says.

Scott Jennings, a participant in a previous version of the course who now runs a company that provides maintenance, repair and support for fitness equipment, was a mentor during the inaugural eight-week session. He says the program offers participants the groundwork for a second chance.

When someone is released from prison, they get a “second sentence,” Jennings says. It is harder for them to get a job because they have to check a box that says they have a felony.

Over the last decade about 150 cities and counties – in addition to 30 states – have adopted some form of “ban the box” policies and laws that remove the question about criminal history from job applications, meant to provide people with a fair chance at landing a job after incarceration. But this patchwork of laws is inconsistent; many apply only to public employers, so people with convictions have far fewer options.

“When you’re an entrepreneur, when you run the business, nobody asks for a background check,” Jennings says. “The playing field gets leveled. In the seven years that I’ve been in business, I have had [my] background checked maybe once, twice at the most.”

Over the two months and eight classes, course participants learned about finances, marketing and “the kind of attitude that you should go into starting a business with,” according to Jaclyn Parker, director for the program.

At the end of the eight weeks, participants are paired with a mentor who can help guide them through the startup process.

Graham Whitley started a web and app development company about a month before taking the Inmates to Entrepreneurs course. He says he benefited most from being able to ask questions of business owners.

“There was one mentor I asked about contracts because I’ve never written a contract in my life,” Whitley says.

Before this eight-week session, Inmates to Entrepreneurs taught one-off courses to people currently in prison consistently since 2007. Brian Hamilton, I2E founder and chairman, also did this type of outreach in prisons in the early 1990s. The organization still offers about two of those sessions per month, depending on requests.

Jennings, who owns the fitness equipment company, took this version of the class in between 2007 and 2010 while incarcerated.

After he was released from Orange Correctional Center, Jennings reached out to Hamilton.

That move “opened doorways for me,” Jennings says. He started his business in 2011.

The new course model, in its first cohort, accepted people with criminal backgrounds. Some of the participants had been out of prison for 15 years; others had just gotten out 30 days before the course’s start. The second cohort started in the second week of January.

Inmates to Entrepreneurs encourages participants to start low-capital businesses like a lawn care service, which requires only a truck, lawn mower and a few basic tools.

“We assume people are coming into our program without any money whatsoever,” Parker says.

In many U.S. states, people released from prison don’t have any money. And if they do, often it’s only enough for a bus ticket. A 2007 report prepared for the California Department of Corrections and Rehabilitation found that from state to state, the amount of money people receive upon release from state prison varies – between $0 to $200, with an average of $54.

Parker says teachers also talk to participants about options for low-interest loans from both state and national resources “should they absolutely need capital to get their business started.”

In addition to the lack of start-up money, participants face other challenges. Starting a lawn-care business, for example usually requires a truck to move equipment around the city.

Parker says when those issues come up, they challenge participants to be creative, asking questions like: How can you work within this constraint? Can you borrow a truck or can you do something else until you can afford your own transportation?

Entrepreneurship is hard and not a guaranteed pathway to success. Some statistics say that 80 percent of small businesses fail within the first two years. Parker says that while they are upfront with program participants about potential failure, generally the program’s success rates are better than average, for a couple reasons.

“If someone is willing to commit their time to learning more about something and improving themselves, their success rate is inherently higher,” she writes via email. “Our program provides a large network of support that an individual starting their businesses on their own may not (and probably do not) have.”

Jennings says he’s seen participants doubt their own abilities. At least one Inmates to Entrepreneurs participant dropped out because he didn’t think he was going to be successful.

“That’s always the biggest challenge, getting people to understand that they got to work past all the naysayers that will surround them at first, even themselves,” Jennings says. “Remember, depending on where our self-esteem and our competence lies, sometimes we’re our own biggest naysayer.”